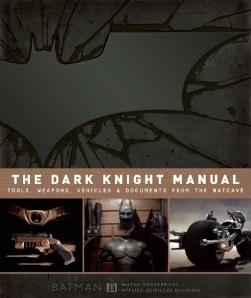 Tis the season for Batman indeed! And from out of this season comes some pretty cool new book-styled products. Now I’m not talking about your paperback novels, but rather the cooler releases that offer all kind of pictures, production info and goodies. Well, to be more specific I’m talking about the release from the “Insight Editions” publishing company titled “The Dark Knight Manual”, a manual style tribute to the fantastic world of Christopher Nolan’s Batman. The book is authored by Brandon T. Snider

You know your in the right products area, due to that marvelous “Insight Editions” book binding and design layout structure. In fact, you could say its, its own super scrap book for Batman-addicts. The book overflows with buckets of cool insert items that probably gave the print shop a run for their money in just “trying” to orchestrate all these printing additionals.

What you end up with is this hybrid showcase piece that proves that “Insight Editions” is really about giving life to their products. Starting off with the cover, we have a hard bound, 3 color with embossed indenting, scuffing and a spot varnish construction…very cool! And wait it gets better!

Instantly you’ll notice the fancy inclusions such as a file folder, with pullouts, inserted photos, stickers, and EVEN sticky notes (note: over 2 dozen removable items re included). This trend continues throughout the book as if put together by Batman and his team himself. In the pages ahead, a new design will detail its latest inclusion with notes by Alfred to Bruce Wayne reminding him to “be careful” or “stay alert” to the new features. This follows along with footnotes about the movies and the lineage of the Batman story itself. Sketches can be found within several sections that show the thought process behind the logos and gadgets used within the films. In addition of course you have a smattering of modern Batman photography that illustrate the movie realities that accompany the descriptions.

The book is highly unique in that it really “feels” like it was put together by engineers rather than graphic designers. There are schematics, map layouts of the Wayne mansion, blue-prints of Batman’s clothes and weaponry and even elaborate overlay schematics of his suit in its various layers. The book details ever piece with high tech talk and fancy memos on the high tech gadgetry of Batman’s gear and crime fighting aids. The bat cave for instance, is detailed with the process that went into making this massive “lair” without the help of contractors. The rooms are detailed in how they grew, changed and are elaborated on to accommodate new enhancements and locked down secrecy. The tool belt itself goes into massive detail with its various gadgets such as a grapling gun, an infra-red periscope, batarangs, a bio injector, an EMP, a saw, bomb gun and others

The suit is a masterwork itself, which according to Alfred costs over $300,000 per suit. Keflar, protection aids, radio signaling and secret buttons to unlock its feature and protect it in the even that it gets compromised and taken. No tiny detail is left to the way side as the book acts as a virtual instruction manual of sorts. We learn about how the man is a one man army using the wealth of Bruce Wayne to create toys and outfits that challenge even the military in high tech efficiency.

In addition, you can look forward to villain profiles (with some hot pictures of Selina aka Catwoman), pages on the Bat “Tumbler” and coolest of all an “Arkham Asylum” blueprint

The Dark Knight Manual” is priced at $40 (of which you can get at almost half on Amazon) and tops in at 112 full color pages.If you’ve ever wondered about the technical aspects of Wayne Manor, the Batman gear, weapons, vehicles and tools, then look no further, you’ll be amazed at the level of thought process that went into making this seem like the real deal!

The following list came from Amazon.com which lists “some” of the removable items included: