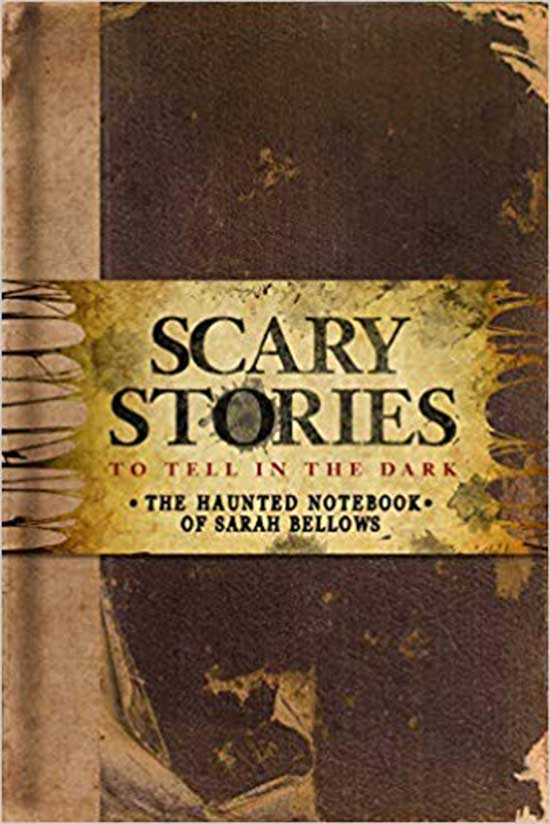 Hopefully you are gearing up for the film by same name?
To tide you over we have what they are calling a must-have companion to the film, or replica of the book used in the movie. A perfect scary book to curl up to, “The haunted notebook of Sarah Bellows” comes complete with some great behind he scenes images from the film.

The book is told from Sarah Bellows notes and perspective, a misunderstood girl who takes a on personally affinity with the tales told by others. Set in the 1960’s, we are brought into the era and emotions of those times. The book itself we are told was left by Sarah as a conduit for living stories that each of the recipients much endure and face a certain fear.

Filled with hauntingly creepy stories from the book, we are taken into the dark and twisted world of Sarah Bellows notebook. This release does in fact reveal some spoilers seeing that it provides illustrations and behind the scenes production photos. though readers can rest assured that there will be plenty more creepy things waiting for them in the film. If you want to get a jump start on the actual stories, then they have all been provided here in literary form.

The book begins on what Guillermo Del Toro claims is the creepiest of the batch, an old inanimate scarecrow named Harold. Harold gets a chance to inflict revenge after years of “hanging” around. This particular fear (a fear of scarecrows) is manifested in the form Harold taking life and chasing down an angry young teenager who has spent years tormenting it.

Moving forward, another teen encounters a rough evening when his need for sustenance is shattered by what he discovers has been cooking all night. A warm stew quickly becomes a “body parts soup” that appears to be driven by a roaming corpse lurking in the house. As the night pushes forward, this teen finds himself living out a pre-written nightmare within the pages of Sarah’s book. In short, a rotting corpse chases him thorough the house proclaiming, “Who stole my big toe?”

Ramon, now doing some time in the local jail is traumatized when a bizarre abomination invades the prison. Called by the author, “the jangly man”, this entity appears to be hot on Ramon’s trail as it terrorizes the residing jail cells and occupants. A combination of body parts, flesh and tissue, this jangly man places Ramon on its radar for a night of sheer terror. 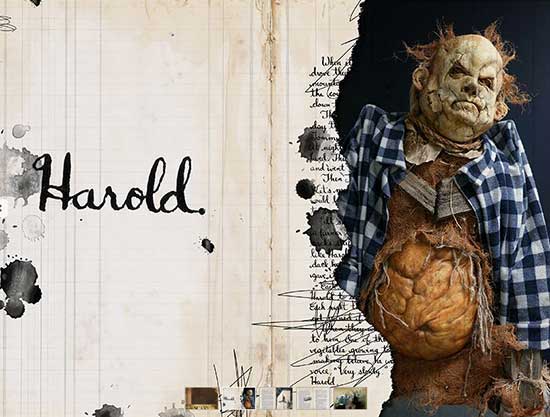 Each of the these stories are intertwined and connected thru this found notebook. The situations connect while the recipients of the book are finding themselves playing a part in a living nightmare.

Seeing that revealing each of the stories within might spoil the experience meant for theaters, I recommend this book as a great takeaway souvenir (and for those who want to take the experience to a more literal level).

Pages and chapter move perfectly from one story into the next designed to infuse a nightmare or 2 into your psyche. It’s designed to be creepy but fun, the kind that gives you shivers!. So make sure and add this cool release to your film books shelf.

Insight Editions has provided this stellar release, “Scary Stories to Tell in the Dark The Haunted Notebook of Sarah Bellows” for purchase on their site