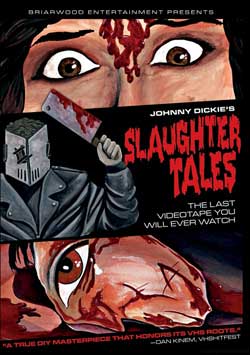 After a teen steals a VHS tape titled “Slaughter Tales” from a yard sale, he seals his fate by ignoring a ghostly apparition in his bath tub and watching the stolen tape. as the movie progresses, simple nightmares turn reality as evil is released from the tape

A while back I reviewed the infamous Black Devil Doll From Hell, a cult classic that pretty much defined the one man and a camcorder dream of making a horror movie. Who would’ve guessed that a fifteen year old would follow in the footsteps of Chester N. Turner to create his very own one of a kind horror movie.

Did you catch that part about a fifteen year old? Again, no mistake. His name is Johnny Dickie and he pretty much did this by himself. We’re talking starring in (he even plays multiple characters), writing, directing, special effects, producing, editing and yes, even the main synth score. In the credits he mentions that this took him two years to do and I believe it. It really is quite remarkable. Also in the credits he even gives an absolutely wonderful shout out to Windows Movie Maker. Nice touch. But in the end the question must be asked, is this a good film.

The short answer is no but, and I can’t stress this enough, it can be a fascinating watch. It is very obvious from the get go, and in actuality throughout the entire film, that Johnny is a major horror fan. He knows this genre. To top it off he has a wonderful self-deprecating humor. At one point he wears a tee shirt that reads, “This movie is terrible.” Gotta love it. To say that Johnny Dickie has a promising future as a filmmaker is an understatement. I’m quite sure not many fifteen year olds would be able to pull something like this off.

So what is Slaughter Tales about? Well, from the cursed object subgenre it revolves around an old, evil VHS tape. One that our hero steals from a garage sale. He promptly returns home to view the tape. But before he does he gets a warning from a spooky apparition that appears in his bathroom. “Don’t watch the tape. You are doomed if you do,” pretty much sums it up. 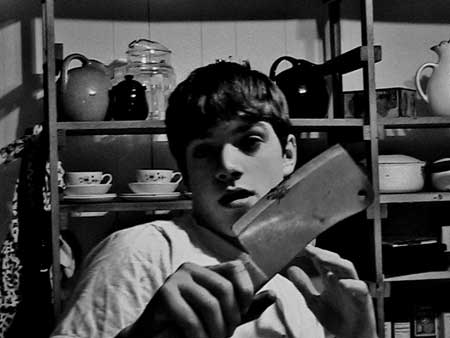 But Johnny, like any good horror movie character, ignores the warning and hits the play button on his VCR. Bad idea. As the film progresses, strange things start to happen to Johnny and it doesn’t take long for him to realize that he’s just made a big mistake. 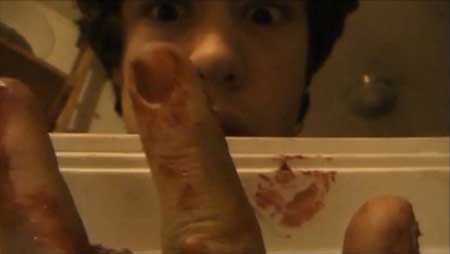 As mentioned above this film was shot extremely cheap, but in a way, like Black Devil Doll From Hell, that is its charm. I love the fact that this mysterious, evil tape is a VHS. A relic from a bygone era, if you will (lord, do I feel old typing that). Low budget horror films have been around since forever and Slaughter Tales, in its own loving way, pays tribute to all that came before it.

I would also say that it serves as an inspiration in the fact that if you have ever given thought to the idea that yes, even you could make a horror film with a bunch of friends, than why not? I know I certainly have entertained the idea but for a variety of reasons never took the plunge. After seeing Slaughter Tales, though, maybe I should reconsider. 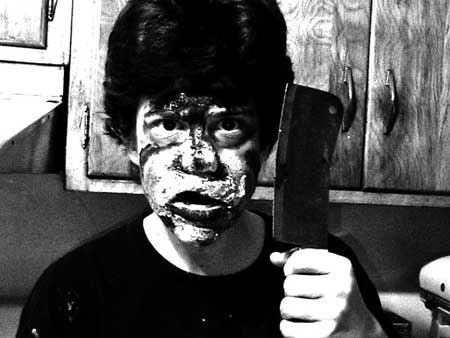 If you do decide to watch, and I will say again that overall it just isn’t that good, please go in with an open mind. Again, this movie has more than its share of faults. It falls prey to a lot of repetition which in turn drags down the pacing. It’s ninety minutes long but probably would have been a little better had it clocked in at around the seventy-five minute mark. The special effects are predictably cheesy but hey, probably better than what I could have done.

There are even some snippets of good dialogue, my favorite being, “I guess the good news is I’m not losing my mind. The bad news is I’ll probably be losing my head.”

In the end I will say this. If in any way you are debating about making your own little horror movie, do yourself a favor and watch Slaughter Tales. Johnny Dickie may be only fifteen, and with a heck of a promising future, but he offers a lot with this film. And like Chester N. Turner before him, it’s nice to see someone making a movie their way, and with no apologies for it.