Book Review: The Essential Supernatural: On the Road with Sam and Dean Winchester – Author Nicholas Knight 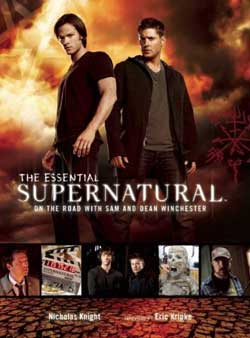 The Essential Supernatural: On the Road with Sam and Dean Winchester

I’ve been a hardcore Supernatural fan from the very first episode up to where it’s at now. And any Supernatural fan will tell you that the series has seen some bizarre journeys over the years. From monsters to urban legends to angels, demons, and Gods of all sorts. It’s safe to say that the series has covered the gamut with the exception of meeting God himself. This is why a book like the one that was just handed to me by the creators at Insight Editions is a fine treat indeed to own.

Not only is it mammoth, built like a brick, chock full of goodies, images and Supernatural stuff, but it’s just simply a great book to have overall. I’ve seen what has come out on the market over the years catering to Supernatural fans, and by far…this is one of the best. Now with great things come a price. Which is why $50 might be steep for most readers to dig out of their pockets. I’m confident that once you pick this up, you won’t want to part with it…especially if you love all things “Supernatural”.

Every great idea has a beginning. “Supernatural” was one that seemed to grow the longer it continued and progressed as a series. The book details the origins, the actors, the process and each season. Each bringing a certain focus to add to the “Supernatural” universe. Season one which is so frequently referred to as the “monster of the week” season helped to establish the 2 brothers and what they do for a living. The book discusses their growth as characters, as actors and as a mythology that evolved into different areas. Every page in this release is littered with photos that range from full size profiles to collages of days long past. The monsters, the weapons and even that dang car, get their own bit of highlighting thru the production notes and story arcs.

Bonus elements include a whole batch of fun inserts that range from postcard insertions to pictures of the Winchester motel rooms, These special inclusions make this book something of a “keepsake within a keepsake” with lavish photography and illustrations created as special attachments. The hunters tools section contains a small book insert that has as a quick tutorial on hunting in the “Supernatural” universe. A section on the Winchester vehicle (the Impala) even contains a pull out air freshener. The section on “Behind the scenes” contains a series of Supernatural show stickers. And topping that is an envelope filled with poster art from the book covers of the “Supernatural” book series created and written by Chuck Shurley

Favorite sections for me are the breakdowns of angels and demons listing both their purpose in the show which in the ranks and how they fit into the storyline. side breakaway sections profile some of the more important characters and actors such as Mischa Collins and the “Trickster” Richard Speight, Jr.

How about those symbols and that Enochian language? Look no further as there is a bit of everything in this massive collective and tribute release. Curious about the Ghost facers? Or maybe just those reoccurring weapons used to shoot and stab the demons in the series? Hex bags, devils traps…red eyed demons, black eyed demons, yellow eyed..your in for a treat with so much here to dig into.

Behind the scenes chapters take on FX solutions, production workings and those “classic moments” that stick within the “fans of the series” heads long after. Wondering about those FBI badges? Ads used and motel ads? Classic props used in the series are included for a detail look. Yep, the graphic designer for the show “finally” get a break showing off some of their creations.

Fans will also enjoy some of the future predictions such as a “Supernatural” movie!! The book rounds out with a thorough episode list for all 7 seasons AND one of the coolest things I’ve seen yet…a Winchester road map that details every location and monster with the locations that they have traveled…wow!!! bad ass!!!

It’s not an overstatement when I say this is the ultimate “Supernatural” franchise coffee table book loaded with so much information and visual appeal that it will keep you occupied for hours. If you call yourself a “Supernatural” fan, then THIS is THE book to own, enuff said!

Book Review: The Essential Supernatural: On the Road with Sam and Dean Winchester – Author Nicholas Knight