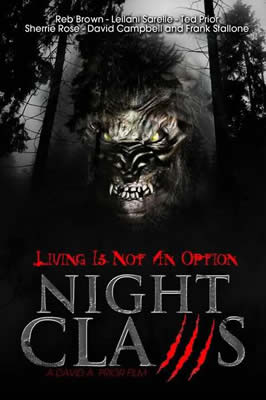 Sheriff Kelly (Reb Brown) runs into trouble when the murder of a young couple is suspected of being committed by a Sasquatch. Is there really a Bigfoot roaming in the woods? As he fights to close the local National Park preserve, he is joined by a scientist (Leilani Sarelle) that has an agenda of her own and hunter named Crawford (David Campbell) out to find the mythological beast before anyone else does. Meanwhile, survivalist guide Sharon Farmer (Tara Sanford Klienpeter) must protect a confrontational group of hikers against the creature’s attacks.

Bigfoot movies are a tricky sub-genre with no single entry being a big stand out; there is no Jaws of Bigfoot films. Director David A. Prior brings his vision of a Sasquatch film with Midnight Releasing’s Night Claws. The film has a strong SyFy feel to it with Reb Brown cast as the small town sheriff and and Frank Stallone as a mysterious benefactor named Mister Testi. To its credit, the film treats its title creatures seriously attempting to build a solid and frightening threat to their vicious attacks. It manages to become a bit gorier than many SyFy films, but still feels made-for-TV in the end. Also, the effects and the over complicated script prevent the Bigfoot creatures from remaining within the film’s spotlight. Aside from Brown’s Sheriff Kelly, there’s hardly a normal chap in the bunch. Each character is so characterized that it borders on silly, charactures instead of characters. And the Bigfoot creature itself is well done but never memorable. Still, the film manages to hold its own against many of its SyFy companions, especially those in this sub-genre. 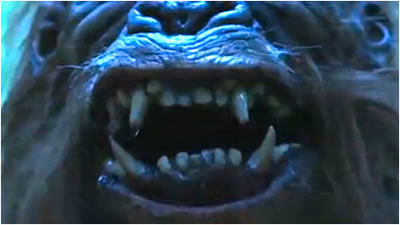 The Bigfoot in Night Claws is pure SyFy cheese, as silly as any Sasquatch b-movie has ever created. Okay, maybe it’s better than Shriek of the Mutilated, but only technically so. The biggest flaw with Night Claws’ creature is that is remains only that, a monster that attacks its victims in the woods loosely based on the Sasquatch mythos. There is very little background or exposition or story to support these monsters. It does not matter how successful the effects are, the movie itself neglects to build any suspense or interest about the nature or intention of the creatures. The Night Claws beasties could easily be bears, humans-in-costume or aliens and nothing much in the story would be altered. Regardless, the creature itself is unremarkable, sadly. And, it is used so sparingly that its inclusion into the story is quickly forgotten. 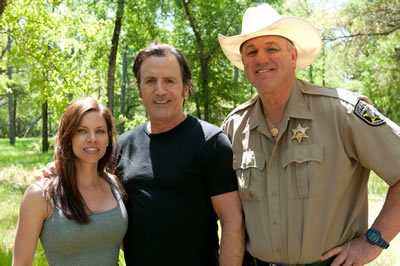 Reb Brown leads a group of b-movie character actors including Leilani Sarelle, Sherrie Rose, Ted Prior and Frank Stallone. Yup, Frank Stallone. Stilted by excruciating dialog and bland direction, the actors suffer horribly, appearing like statues in motion. Even for b-movie, SyFy-level cheese, the acting is noticeably wooden. It remains curiously interesting somehow, however, perhaps in a train-wreck sort of way. Reb Brown is charming and charismatic even as he stumbles through the script. His pedantic performance is elevated by his winning smile and earnest approach, providing the film with a curious and amusing lead. The rest of the cast seems to wander around unsure of what is going on or what is actually happening, lost in the confusion. 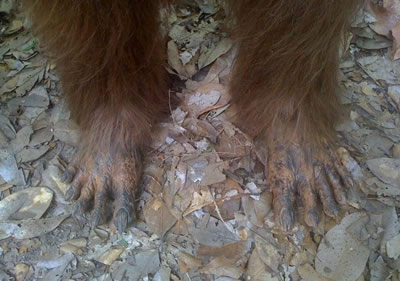 For a Bigfoot movie, there’s very little Sasquatch action going on in the film. Instead, the script contains various subplots and conspiracy-driven drivel, most of which ends up having very little to do with the creatures at all. At its core, Night Claws follows the nature on the loose genre stereotypes established by Jaws. The beasts attack; the sheriff is notified; he wants to shut down the park but the politicians will not cooperate; the attacks gets more and more gruesome until a small team must hunt the creature down. To its credit, the script does veer away from this trite expectation toward its conclusion, but it is both too little too late and strikingly dull. There’s just too much going on; the film is overblown and long-winded forgetting, almost entirely at times, that it is a monster movie. 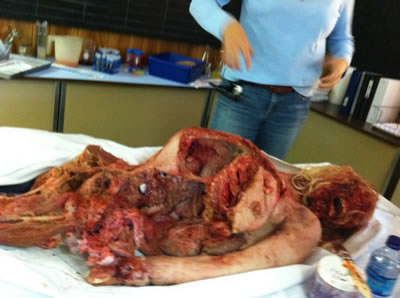 Night Claws is an example of good intentions gone wrong, missteps in motion. The film embraces its b-movie aspirations but lacks the confidence to go full cheese or commitment to go totally original, resulting in a confusing and boring mess. The film steers to far from its titular creature and over complicates the plot with too many distractions. Reb Brown and Leilani Serelle make the most of their time on screen in solid b-movie performances while their supporting cast frequently look confused and dismayed. The creatures themselves look very similar to most every other Bigfoot monsters found on screen bringing nothing terribly unique to the Sasquatch sub-genre. Regretfully, this film is too dull and pointless to recommend to most. There is certainly a killer Bigfoot movie out there somewhere or, at least, an entertaining one; however, David A. Prior’s film is not it. Night Claws should go back into hibernation. 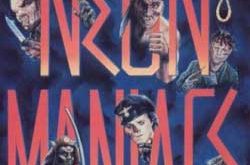