Home | The Walking Dead Giveaway: Rise of the Governor & Road to Woodbury

The Walking Dead Giveaway: Rise of the Governor & Road to Woodbury

HorrorNews.net presents The Walking Dead Giveaway: Rise of the Governor & Road to Woodbury. We have three great Walking Dead prizes. All you need to do is email joyhorror@horrornews.net and put “The Walking Dead” in the subject line. In the body of the email, please include your full name and complete address. United States ONLY. In the next two weeks, we will picking random winners for these Walking Dead prizes: 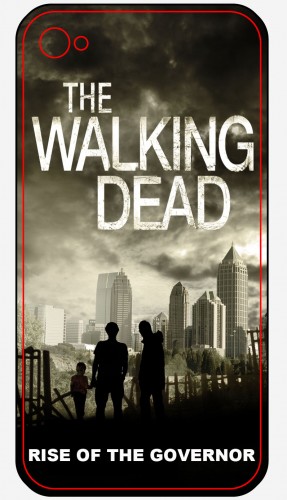 Runner up 1:
— An iPhone decal to skin your phone with the original cover art from The
Walking Dead: Rise of The Governor

— A specially signed–by co-author Jay Bonansinga–copy of The Walking
Dead: Rise of the Governor galley: this galley features different cover art
then the finished novel, so it makes the perfect Walking Dead collector’s
item!

From the mind of ROBERT KIRKMAN, creator of The Walking Dead universe, comes the riveting follow-up to the New York Times bestseller The Rise of the Governor…

THE WALKING DEAD:
THE ROAD TO WOODBURY
By ROBERT KIRKMAN
and JAY BONANSINGA
Welcome to Woodbury: a walled-in community where people barter services for food, sleep with roofs over their heads, and find protection under the rule of a self-proclaimed leader. In the barren, zombie-infested outskirts of Atlanta, after an apocalyptic plague has left the living pitted against and grossly outnumbered by the lurking dead, Woodbury seems like a perfect sanctuary. Caught in the mass exodus, crippled by fear and hunger, and barely alive after a bloody and dismal struggle against the multiplying Walkers, stumbling upon Woodbury may have saved Lilly Caul’s life—and the lives of the few she took under her wing.

Despite Lilly’s initial hesitations about Woodbury, her vote to keep moving is outnumbered by the others in her group. And as she considers the grim alternative of solitude, Lilly finds no choice but to rely on the residents of Woodbury for refuge and thus, accept their mysterious leader – The Governor – as her own. Lilly’s suspicions about Woodbury and The Governor soon come to fruition in THE ROAD TO WOODBURY (Thomas Dunne Books/St. Martin’s Press; 10/16/12; $24.99), the latest page-turning novel in the New York Times bestselling series by Robert Kirkman and Jay Bonansinga. Ultimately, Lilly and a band of rebels devise a plot to take over The Governors reign – and in doing so, open up a Pandora’s box of mayhem, destruction, and irrevocable consequences.

Readers of The Walking Dead: Rise of the Governor followed the disturbing transformation of Philip Blake as he morphed into The Governor; fans of Kirkman’s Walking Dead comics know Woodbury’s leader as one of the most ruthless and inhumane in the series; and viewers of AMC’s “The Walking Dead” were recently introduced to The Governor as the character made his television debut in the show’s third season. Yet the depths of The Governor’s psyche and his merciless interpretation of law and order on the citizens of Woodbury manifest in THE ROAD TO WOODBURY with unprecedented fashion, and with riveting plotlines and shocking scenes that will leave even the most ardent Walking Dead fans in awe.

Robert Kirkman was thrilled to elaborate on familiar characters and introduce a cast of new ones with his first Walking Dead novel in 2011, and is excited to team up with Jay Bonansinga for the sequel. “We’re going to meet new characters as they come to Woodbury and see how Woodbury is founded, and how the Governor continues to grow as a character,” said Kirkman. “It all takes place before we met the Governor in the comic book series, and there’s a lot more story to tell with that guy. We’ll also look at others—Lilly is going to be another focus. It’s going to be fun to explore those characters again.”

ABOUT THE AUTHORS:
ROBERT KIRKMAN is best known for his work on The Walking Dead and Invincible for Image Comics and SKYBOUND. He is one of the five partners of Image Comics and is an executive producer and writer on AMC’s critically acclaimed television series The Walking Dead.
JAY BONANSINGA is a critically acclaimed horror novelist whose works include Perfect Victim, Shattered, Twisted, and Frozen. His debut novel, The Black Mariah, was a finalist for a Bram Stoker Award.

Praise for The Walking Dead: Rise of the Governor:
“An excellent companion to the The Walking Dead comic books. The story is enriched by the novel format, and the characterization of the series’ most hated villain is something no fan will want to miss.” —Examiner.com

“This book stands alone and is a compelling read for fans of the series or just fans of zombies. Watch out though, because once you get a taste of the particular Kirkman brand of zombie mayhem, catching up on past issues is just around the corner.”—The Ossuary

“The story makes a great novel. You’ll get sucked in and can easily visualize everything that is happening. It’s simply a great read.” —Comicvine.com

“It takes great advantage of the literary medium in a way that most tie-in books would not.” —TVOverMind.com

“Not for the faint of heart, this book runs on pressure-cooker suspense, graphically described bloodshed, and dark acts of brutality…This riveting character study adds a new dimension to the oeuvre by fleshing out established characters and plot lines.”—School Library Journal