We have a great opportunity for Fear of the Walking Dead fans to get the complete first season on Blu-ray!   Please email joyhorror@horrornews.net with the subject line, “Fear of the Walking Giveaway” and in the body of the email, we need your full name and complete mailing address (no po boxes).  You will be entered into a random drawing and Horrornews.net will contact the lucky winners.  This contest is for United States and Canada ONLY. 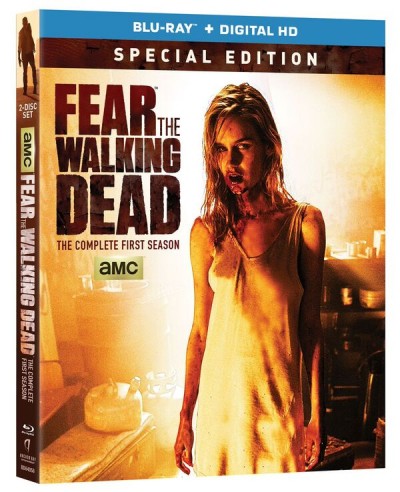 Living in the same universe as “The Walking Dead”, “Fear the Walking Dead” is a gritty drama that explores the onset of the undead apocalypse through the lens of a fractured family. Set in Los Angeles, a city where people come to escape, shield secrets, and bury their pasts, a mysterious outbreak threatens to disrupt what little stability high school guidance counselor Madison Clark (Kim Dickens, Gone Girl) and English teacher Travis Manawa (Cliff Curtis, “Missing”) have managed to assemble. The everyday pressure of blending two families while dealing with resentful, escapist, and strung out children takes a back seat when society begins to break down. A forced evolution, a necessary survival of the fittest takes hold, and the dysfunctional family must either reinvent themselves or embrace their darker histories.

“Fear the Walking Dead: The Complete First Season” will be available on Blu-ray + Digital HD and DVD from Anchor Bay Entertainment on March 22, 2016 for the suggested retail price of $59.99 and $49.98 respectively, and includes the below bonus features:

ABOUT AMC
Whether commemorating favorite films from every genre and decade, or creating acclaimed original programming, AMC brings to its audience something deeper, something richer, Something More. The network reigns as the only cable network in history ever to win the Emmy® Award for Outstanding Drama Series four years in a row with “Mad Men,” and six of the last eight with back-to-back honoree “Breaking Bad.” The network boasts the most-watched drama series in basic cable history and the number one show on television among adults 18-49 for the last three years with “The Walking Dead.” AMC’s current original drama series include “The Walking Dead,” “Better Call Saul,” “Hell on Wheels,” “TURN: Washington’s Spies,” “Halt and Catch Fire,” “Humans,” “Fear the Walking Dead,” “Into the Badlands” and the forthcoming “The Night Manager,” “Feed the Beast,” “Preacher” and “The Son.” AMC also explores authentic worlds and discussion with original shows like “Talking Dead,” “The Making of The Mob,” “Comic Book Men” and the upcoming “Ride with Norman Reedus” and “The American West.” AMC is owned and operated by AMC Networks Inc. and its sister networks include IFC, SundanceTV, BBC America and WE tv. AMC is available across all platforms, including on-air, online, on demand and mobile. AMC: Something More.