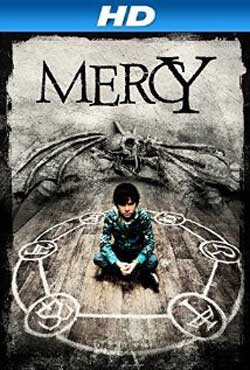 The story follows two young boys who go with their single mother (O’Connor) to take care of their elderly, senile grandmother named Mercy, only to discover that she’s a witch who made a pact with a dark force many years before.

There seems to be a never ending supply of Stephen King adaptations in the horror genre. Carrie (1976) and Misery (1990) both inspired by King’s writing are phenomenal horror films which have stood the test of time.  However with greats like these there are also an abundance of averagely made films based on the master of horror’s writing. Mercy’s (2014) source comes from one of his short stories (originally titled Gramma) found in his collection Skeleton Crew published in 1985. Mercy tells the story of a young boy George (Chandler Riggs, Walking Dead) who has a close bond with his grandma named Mercy (Shirley Knight). When his grandmother becomes sick she is sent to an old age home but when death comes knocking at her door George, his mother and brother take her home to look after her in her final few days. George starts to notice strange things happening to his grandmother. With his brother’s help he slowly uncovers the truth about Mercy and the family’s past.

Taking a short story and turning it into a feature length film is a difficult task for any director and it seems like Mercy buckles under the constraints of the story that it is trying to tell. Starting with some beautiful long shots of the surrounding fields around Mercy’s house, George begins narrating the story about his grandma. If you had no knowledge of the film it would be easy to mistake Mercy for a family dramedy. The way George begins the story is very light compared to the dark subject matter that it tries to explore later. This is a big problem throughout the film where there are lots of instances that it plays like a family dramedy with quirky humour found in the first part of the film. That kind of tone and humour is fine if the rest wasn’t so dark, I mean the film touches on issues such as abortion and selling your soul to the devil! Saying this though the first 50 minutes of the film is engaging and built the sense of mystery quite nicely.

For such a little known film there are quite a few well known actors such as Frances O Connor (George’s mother), Dylan McDermott (playing the sexy friend of the family) and Mark Duplass (George’s loud mouth uncle). This calibre of acting helps to raise the film above its mediocre script even if one or two of them seem to be playing for camp, which does create some unintentional laughs. Yet all these actors are barely used and it is up to Chandler Rigg playing George to carry the film on his small shoulders in which he does the best he can with what he is given.

The convoluted plot is a real issue in the film, as mentioned before the first half of the film builds the suspense nicely as the viewer uncovers Mercy’s secrets. It is when the climax of the film arrives that there is far too much going on, that makes little sense. While I was watching the final scenes I didn’t know what the hell was going on (it’s also important to note that on my screen the dark scenes were extremely dark which made it difficult to see the action). Through out the film there is a lot of clunky exposition in the script which I was willing to look past but by the end when things aren’t making any sense I gave up. Once the film finished I looked up King’s original short story to understand exactly what happened in the film only to find out that the original story had a much darker ending. What a disappointment! The film covers such sinister territory I don’t understand why they didn’t follow through and create a more fluid ending that King created himself.

This is another adaption to join to the pile of films that had good intentions but failed in bringing King’s story to life. With most of the film’s elements not being used to their full potential it is hard to see Mercy as anything but a disappointment.