1983: A group of high school students are having a great time near Hollywood Hills at the weekend when they bump into the Loser from their school, Sam, who’s just on his way home. Sam would do anything in order to get Jenny’s attention, one of prettiest girls in school. Unfortunately she’s also the girlfriend of the school’s bully, Biff, the quarterback of the football team.

Biff and his buddies are keen to take Sam to the old abandoned amusement park to make him prove his courage as part of their initiation ceremony. They involve Jenny in their cruel game as the grand prize of the competition. Sam accepts the challenge, but the girl wouldn’t let him go in by himself; she follows him into the amusement park and a night they’ll never forget. Because in the old park, hidden in the darkness, are frightening and somewhat eccentric monsters who love to torture innocent human beings while intensively annoying each other

One thing that cannot be denied about Gingerclown is that it has a fantastic collection of famous names under its belt. There’s Tim Curry from The Rocky Horror Picture Show, Legend, Addams Family Reunion as well as many more from both stage and screen. There’s Lance Henriksen from the likes of The Terminator, Aliens, Alien 3, Pumpkinhead as well of a bunch of other horror classics. There’s Brad Dourif from the Child’s Play franchise, the Halloween remake and even two of The Lord of the Rings movies.

It’s just such a shame that the movie is pretty terrible then!

Gingerclown is supposed to be a bit of a nostalgia trip back to the eighties (which is fine by me), but there was absolutely nothing likeable about this movie. The acting is awful, the dialogue is awful, the effects are awful – the entire plotline is awful. These are all harsh remarks to say about a film, but I shall try my best to justify myself throughout the rest of this piece. I understand that 80s films were something quite different to how we do things now, but there is no need to cling on to the worst aspects of 80s films as there were loads of good ones as well. It is also interesting to note that Gingerclown is the first Hungarian horror comedy in 3D – I’m guessing they went for 3D so as to try to emulate the comeback of 3D movies in the early 80s, though this is not a film which gained anything from being in 3D.

So, it begins with a bunch of jock-type high school guys who are torturing the school nerd, Sam. The group are spurred on by the leader, Biff, who starts to mock Sam about his awkwardness with girls. Biff’s girlfriend, Jenny (who also happens to be the prettiest girl in school), gets upset with Biff’s behaviour, especially when he challenges Sam to go to the abandoned amusement park to prove himself in some sort of twisted initiation ceremony. Sam reluctantly accepts, mainly because he’s always had a crush on Jenny, and heads into the creepy place. Surprsingly, Jenny quickly follows him inside out of sympathy, and the two end up exploring the amusement park together, encountering unusual creatures along the way – all of whom appear to have sinister intentions. Eventually Biff too heads inside to get his girlfriend back, but his c**kiness is ultimately what causes his downfall in the end.

There is absolutely no character development, and for this reason the viewer has no one to invest in. We don’t care what happens to anyone basically. This is especially bad as there are only three main characters in Gingerclown and so elaborating on their backgrounds wouldn’t have taken up too much screen time. I suppose that I do like the simplicity of a film that launches straight into the action without any pointless build up scenes, however, this only works up to a point. Similarly, the characters are completely cardboard cutouts with no real depth or complexity to them – these type of people are fine to use as fodder, but not the main cast. It’s the simple things, like why would Jenny even be with Biff in the first place, as from the opening scene it is clear that she is repulsed by him? And why would Biff just let his girlfriend wander off on her own into an abandoned amusement park at night? 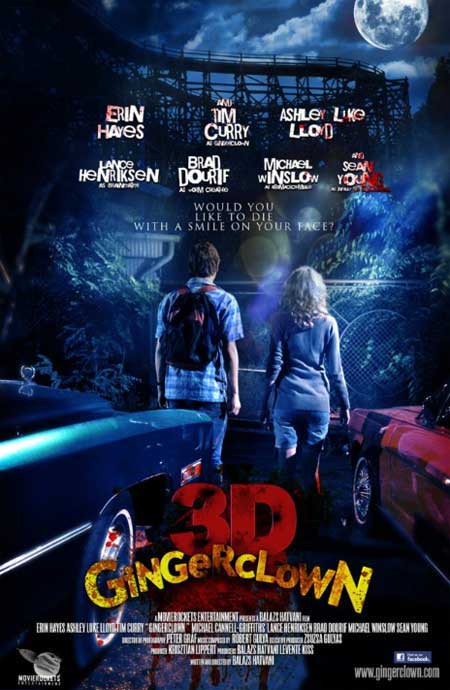 All three of the characters turn out to be incredibly annoying. I personally found Biff quite painful to watch (he literally yells every single line, but why?). Then there’s the creatures lurking in the abandoned amusement park, all of which were given creative and enticing names (eg Braineater and Stomachcrumble), yet it is hard to really distinguish one from the other in the dim environment. The puppets they made for these were completely and utterly terrible, with only the head looking like any work actually went into making it look scary. I thought that this was detrimental to Gingerclown because these obscure looking things didn’t make me feel scared or make me want to laugh, it just made me feel sorry for the filmmakers. I feel like if they could afford to spend the money on the big names that I mentioned at the start, then surely a bit of cash could have been set aside for making the creatures look moderately decent. Think of The Evil Dead (1981) and The Thing (1982) who both used hand made, low budget special effects which are still revered today!

Where the basic plotline falls down for me is that there is never any explanation offered about the purpose or origin behind the strange creatures that lurk in the abandoned amusement park. They don’t seem to have any point to their existence and this is something that just bothers me about the whole concept of Gingerclown. Where did they come from? Did they have anything to do with the amusement park initially falling into disrepair, or did they somehow develop in the isolated emptiness that followed? The synopsis says that they ‘love to torture innocent human beings’, but why? Don’t expect to find an answer.

I may have torn into Gingerclown an awful lot, but perhaps this was just because it was not my ‘type’ of movie. If you like terrible attempts at recreating the 80s, then by all means give this one a shot. The idea of using an abandoned amusement park is actually a great idea, but the movie simply did not work. It wasn’t scary. It wasn’t funny. It wasn’t really anything more than a couple of people in darkened rooms talking to badly made puppets. Sorry.