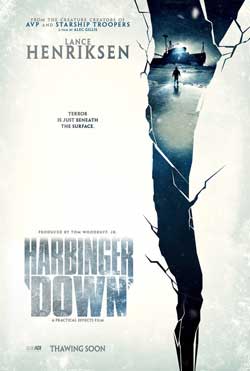 Thawed from ice after three decades, mutated creatures recovered from a piece of Soviet space wreckage terrorize a group of graduate students on a fishing trawler.

Harbinger Down was, like a growing number of films today, crowdfunded through Kickstarter. With a promise to celebrate animatronics and practical special effects, along with an award-winning crew (including both Robert and Dennis Skotak, Pat McClung and Tom Woodruff, Jr.), it’s unsurprising that they surpassed their $350,000 goal.

The plot is heavily reminiscent of that the of The Thing (both John Carpenter’s 1982 original and, perhaps even more so, Matthijs van Heijningen’s 2011 tribute – in fact, the basic synopsis is so similar you might struggle to tell them apart at first glance): there’s a frozen wasteland, some sort of alien creature with the ability to absorb or control other lifeforms (though the enemy in Harbinger Down isn’t quite alien – we’ll get to that) and, in general, a whole lot of chaos. So, good stuff all around, potentially. But how does it hold up?

While most of the story of Harbinger Down takes place aboard the trawler vessel Harbinger, the film’s opening shows a spacecraft, Russian in origin, hurtling through space as a single astronaut attempts to make contact with mission control. However, it becomes apparent that, as the ship bursts into flames, he is not entirely alone.

Harbinger is owned by Captain Graff (played by the brilliant Lance Henriksen); during this particular trip, however, his granddaughter, Sadie (Camille Balsamo) along with fellow grad student Ronelle (Giovonnie Samuels) and their professor, Stephen (Matt Winston) and are aboard the ship to carry out some research on the effects of global warming on Beluga whales. The ship’s crew is relatively small: there’s Svet (Milla Bjorn), Big G (Winston Francis), Bowman (Reid Collums), Dock (Michael Estime) and Atka (Edwin H. Bravo). Their investigation takes them from Dutch Harbor, Alaska, and out into the Bering Sea – an isolated location, and the perfect setting for something especially creepy.

In their search for the whales, they discover the wreckage of the Russian spacecraft and unwittingly bring it aboard the ship. Despite the protests of the ship’s crew, they store the craft in the ship’s hold, where, against Stephen’s wishes, Sadie goes down to investigate the wreck. On board, she discovers the preserved body of the spacecraft’s pilot, and with the help of Svet she is able to translate some of the Russian on the ships exterior in order to determine its age. Inside, there is a mention of what Svet directly translates as ‘water bears’, which the Russians appear to have been studying in space – creatures we later discover are, in fact, tardigrades.

In reality, tardigrades are exceptionally cool little creatures which can survive almost anywhere, even in a complete vacuum. So, naturally, the tardigrades aboard the spacecraft were able to survive the crash – though not entirely unscathed. After exposure to radiation, they are transformed into a mutant organism, consuming other lifeforms and growing to extreme proportions. As you can imagine, as the people aboard the ship realise what’s going on, they become increasingly paranoid, unable to immediately determine who out of the crew and passengers has become infected. 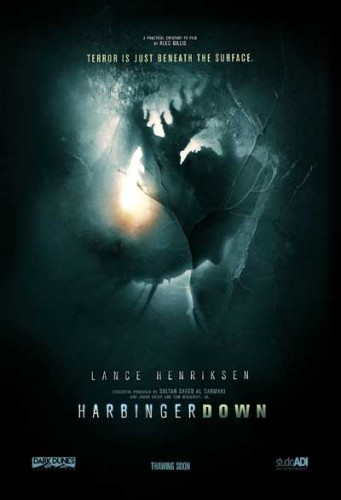 I quite liked the characters, though many of the crew members aboard the ship felt quite disposable from the outset, despite attempts in the film’s script to make them seem likeable. There were a few details which felt a little unnecessary (for example, the sort-of sexual chemistry between Big G and Svet, not to mention her little secret – I won’t spoil that here) but the overall story was solid enough, if a little predictable. It’s easy to see where Alex Gillis, who wrote and directed the film, took his inspiration from: The Thing, Alien, and The Fly are a few that spring to mind quite easily.

It’s really unfortunate that the lighting in many of the films featuring the film’s ‘creature’ is really poor – I assume that this is largely owing to the cramped environment in which it was shot, and not due to the poor quality of the animatronics (at least, I’d hope so, given the pedigree of the artists involved). While torchlight has been used to great effect in monster movies (the xenomorphs in Alien were often shown through the beam of a torch, though partly owing to limitations in mobility), it sometimes took away from the scare factor as I spent a lot of time trying to make out what was going on. 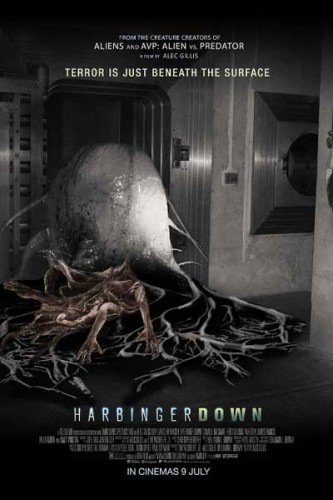 Obviously, Harbinger Down was produced with a limited budget (the Kickstarter campaign, as I mentioned earlier, afforded them with more than their original $350,000 budget, though I’m not sure if they received additional funding). I really love that the people at Studio ADI saw the film as an opportunity to prove that not everything has to be CGI in order for it to look frightening, and I think that, for the most part, they achieved their goal. But, then again, I’m a sucker for creature features from the eighties, so maybe I’m a little biased.

If you’re a fan of Carpenter or Cronenberg’s claustrophobic blend of science fiction and horror, you’ll most definitely enjoy Harbinger Down, though you may find it brings nothing new to the table. However, I’d say that, overall, it’s worth the watch – it’s well executed, with a good setting and the animatronic creatures (while not always perfect) feel much more solid that any computer-generated nasties, offering some brilliant scares.