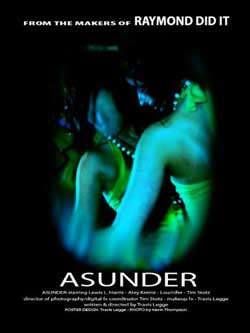 On what should have been a normal night out, Josh finds himself drawn into a Hell of his own making.

There is no greater amusement park ride of the mind than a well-executed horror anthology.  In presentation, even the most forgettable collection of macabre tales caters to one’s short attention span in a subservient fashion rarely accomplished by other incarnations of entertainment, save Nickelodeon cartoons and YouTube videos of cats tweaking on the nip.  I adore these films, for better (“Creepshow”, “Vault of Horror”, more recently “Chillerama”) and for worse (“Nightmares”, either “Creepshow” sequel).  Even the latter examples contained at least one chilling segment to boast of.  Well, not so much “Nightmares”, but you catch my drift.

Essentially a collection of short films from Plastic Age Productions, “Asunder” disappointed me out of the gate by having no common thread to tie their frightful fables together, save the filmmakers.  The interwoven narrative is often my favorite aspect of these movies, and in many cases (especially those of poor quality), the best moments brought to the table.  This is merely a negligible and personal complaint on my part, because the true worth lies within the caliber of the episodes, not necessarily in the overall picture’s framework.  That being stated, I will grade each individually, then give the whole of “Asunder” an encompassing rating: 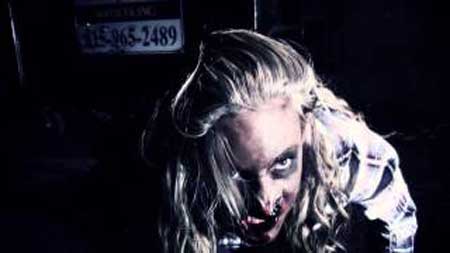 The first in the lineup is “Asunder” itself, and arguably the most polished of the bunch.  We follow Josh (Louis Harris II) on his usual Monday night at the local watering hole after what is apparently the prerequisite argument with his nagging wife Melanie, portrayed with staid annoyance by Lou Cifer.  This obvious screen pseudonym is a blatant “Angel Heart” reference, which immediately earns the actress cool points for her taste in horror, if not for her acting abilities.  At the club, Josh meets an enigmatic temptress (Aley Kreinz) who persuades him into a night of passion at her apartment.  To give any further details would detract from the fun of “Asunder”, since the brilliantly conceived special effects are both shocking and nightmarish.  They serve in a purely metaphorical capacity, but simplicity is the strong point here.  Accolades to writer/director Travis Legge and his director of photography Tim Stotz, who also wears several other hats in the production too numerous to mention, including portraying a character in the film.  Together, they created a chilling morality tale, despite its inadequacies in front of the lens.  GRADE: B+

“Taxidermy,” also written and directed by Legge from a story by Sarah Scharnweber, begins similarly to “Asunder”, in the throes of domestic discourse.  Andy (Matt Roeling), after confessing to a long-standing affair, leaves weeping girlfriend Josie (Tina Renee Grace) to be with Beth,  the other woman in question.  Beth, played by Jolene M. Aldus, wants nothing to do with Andy in terms of a real relationship, and he is forced to swallow his pride and go back to Josie, who is delighted by her man’s return.  The lengths Josie is willing to go to keep Andy in her life is where the horror makes a belated appearance, in a fitting twist at the tail end of the segment.  Unfortunately, the performers in “Taxidermy” make the cast of “Asunder” seem like Shakespearean legends by comparison, sinking the installment long before we are introduced to Josie’s latent insanity.  Like its predecessor, “Taxidermy” is well-executed, but overall falls flat.  GRADE: D+ 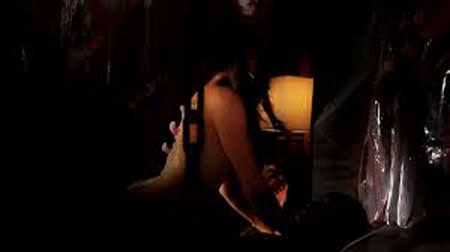 The third story takes a decided nosedive in structure, opting for a standard slasher theme over both substance and style.  “Event Invitation” begins with a group of thoroughly unlikable college friends all receiving the title correspondence, extended to them from former put-upon classmate Erik (Travis Legge, who also wrote the script).  Portrayed by Heather Dorff, Deann Baker, Michael Dilacova and Tyler Klunick, we are made aware this clique of young adults is the in crowd, because they reference Urban Dictionary and speak in slang that will most likely sound dated in approximately five minutes.  It does manage to throw in a couple of surprises at the end, and Legge does an adequate job in the role of nerd-turned-psycho. The gore effects were handled quite nicely, though the direction by Myke Wilson was sorely lacking in the atmosphere of the first two outings.  GRADE: C-

Segment Four, “Kept”, is a corker.  A fresh and intimate take on the standard zombie invasion plot, it introduces us to Derrick (Kyle Hoskins) and Samantha (Melissa Revels), a young couple on the run from the worldwide epidemic as they drive along a deserted stretch of highway to an unspecified government outpost for survivors.  Along the way, they are abducted by Leroy, played with effective aw-shucks menace by jack-of-all-trades Tim Stotz.  It seems Leroy’s wife (Staci Charles) is one of the infected unfortunates, and Samantha and Derrick are her next two intended meals.  Briskly paced with just the right touch of zombie kink tossed in for added weirdness, “Kept” may not have the production values “Asunder” proudly displays, but it is by far the most well-acted of all the pieces.  Bravo to writer/director Legge for this one.  GRADE: A-

The zombie storyline continues with Legge’s “Widdershins”, a taught and incredibly short little thriller that combines the undead theme with graveyard superstition.  An amorous couple (Aley Kreinz and Ty Yaeger) make their way into a cemetary for a quick romp, only to find themselves surrounded by a horde of ravenous living dead.  Though standard fare indeed on the surface, the package is neatly wrapped up with a nice twist and a healthy dollop of humor.  It’s always a welcome rarity when zombies actually speak in films, and “Widdershins” certainly doesn’t disappoint.  GRADE: B

The final segment is the surreal and sporadically funny “City Without Walls”, a continuation of the story commenced by “Kept.”  Leroy, now a freshly turned zombie after being attacked by his wife, meets another member of the undead (Jolene M. Alders), who takes him under her wing to guide him through his sudden existential crisis.  Written by Stotz and directed by Legge in a stylistically washed-out perspective, “City Without Walls” attempts another warped slant on the living dead theme, but never really catches fire as it should.  It simply rests upon the laurels of its intelligent gimmick and feels much more like an afterthought than a stand-alone piece.  Still, kudos for originality must be granted.  GRADE: C+

As a whole, “Asunder” is a pleasant diversion from the usual genre outings, and even its couple of failures still reach to achieve something different for the viewer.  It reminded me at times of the defunct Showtime series “The Hunger”, one of my all-time favorite horror anthology guilty pleasures.  On the flip side, the often wooden performances and reliance upon them until the final reveals brought to mind the late-night television schlockfest “Monsters”, and that is not a cherished memory. 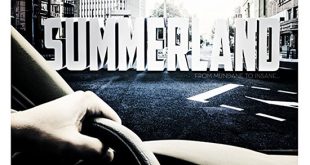