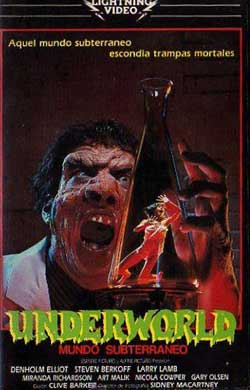 When high class hooker Nicole is kidnapped from her brothel, Rich businessman Hugo Motherskille hires her ex love Roy Bain to find her. Investigating the disappearance, he eventually finds traces that lead to Dr. Savary, who has produced a strange white powder that’s coveted by a race of deformed human beings who live in the underworld in the sewers below the city.

There aren’t many films that keep me disinterested throughout the entire thing. Apparently, Transmutations is one of them, because it took all of my willpower to make it through this slog. Transmutations was written by Clive Barker, and that’s fairly surprising considering how terrible the plot is, along with the very poor characterizations of almost every single player in the film. The story is simply a mess of ideas that do very little of anything, and not even the darkwave, saxophone-riddle soundtrack can make this film any more interesting. 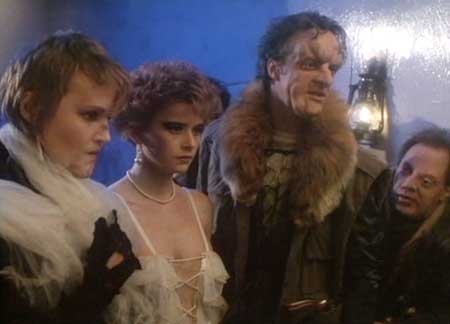 Roy Bain (Larry Lamb) is called in to investigate a case of a missing hooker named Nicole (Nicola Cowper) by rich businessman Motherskille (Steven Berkoff). It must be assumed by the viewer that Bain has had connections with Motherskille and Nicole in the past; the film does a particularly poor job of giving the viewer any sort of backstory towards the beginning, and after the plot has begun to meander, it really makes no difference anymore. 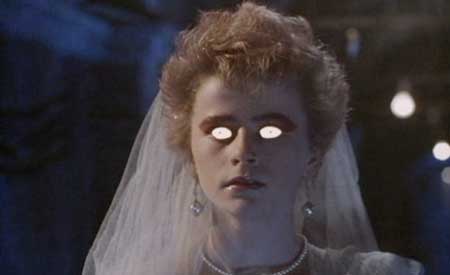 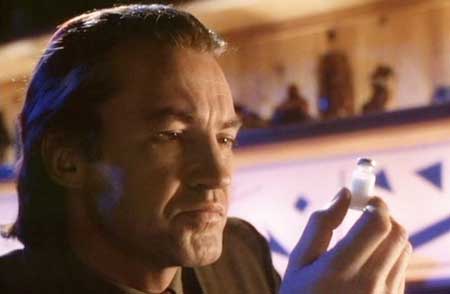 There are some other characters who are supposed to be more important, like Motherskille (how can that name not cause you to foreshadow his role as supreme villain?) and his crooks, one of whom wears ridiculous sunglasses throughout the entire film, but these are the general cookie-cutter ideas – the sunglasses make the guy look badass, and it wouldn’t be any more out of the ordinary to see Motherskille sporting a minx coat while brandishing a cane made of gold. Transmutations even makes note of the terrible character writing by referring to one of the goons as a parrot; it’s a generous compliment.

The script is quite bad, but it’s managed fairly well by the actors, who do the best with what they have. Fortunately, most of the actors are very good, and that means that Transmutations is at least watchable. It’s following the storyline that becomes the killer here, because it’s a horrible maze of characters switching back and forth between good and bad guys while Bain tries to tell the difference.

At first, the viewer might question why the “monsters” of Transmutations aren’t really that scary. Sure, they growl a lot, and some have glowing eyes while others get bulbous growths on their faces, but there’s nothing about them that seems overtly threatening. That question is answered later on, when the film decides that the monsters are really just mutated humans given a drug that caused them severe reactions. Hm, didn’t see that one coming from the first moment Motherskille hired Bain… 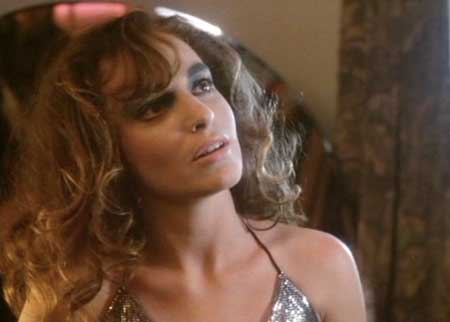 See, it’s fine and good if Transmutations wants the monsters to be misunderstood. It often works for films of this nature. But not when the movie spends little time with them, and barely tries to develop them beyond their physical characteristics alone. To be honest, I can’t tell you a single name of the mutants because I really could not care to learn them – their roles are that small. And even if there is a small twinge of pity for them when they’re murdered one by one by machine guns with laser sound effects, that just indicates the compassion that the viewer has, not the effect the film has had on them. 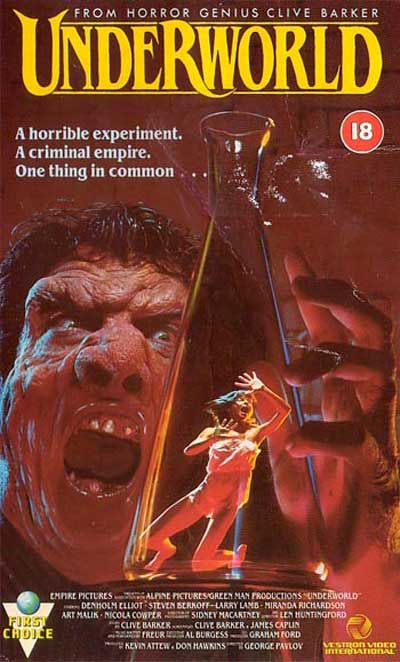 It will be hard to find Transmutations or Underworld, and maybe that’s a good thing. A film this bad will die out without its lifeblood – the audience – and it’s just an indication of how poorly received the film was originally. The movie isn’t an evolution of the horror genre, but a mutant that is doomed to die off because of its fatal errors.