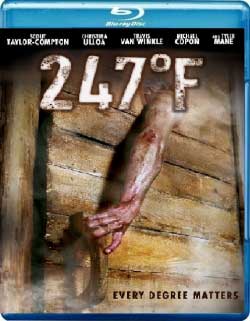 At a lakeside retreat, three young friends get trapped in a sauna while a fourth lies in a drunken stupor outside.

I think director Levan Bakhia missed a trick when he named his film 247°F; with a title like that it could be about pretty much anything except snowboarding. What he should have done is call it KIDS IN A SAUNA and let word of mouth do the rest. This is one of those movies that are less about the characters and plot than they are about ‘A Situation’. Think of ATM or FROZEN and you’ll have the right idea. They’re not exactly horror movies (although they do trade on fear and often gruesome injuries) and they’re not exactly thrillers (because they don’t rely on plot twists); for want of a better term you might call them ‘peril movies’.

The characters in peril in this particular movie are four friends who head out to a stunning lakeside cabin where they plan to do all the usual things young people get up to in this sort of movie, namely drink, smoke and make out. Michael (Michael Copon) is a prime alpha male who is interested in drink, drugs and sex – in that order – and who exhibits a degree of fecklessness rare even by horror movie standards. His pretty but vacant girlfriend Renee (Christine Ulloa) has persuaded her wallflower best friend Jenna (Scout Taylor-Compton, star of Rob Zombie’s recent HALLOWEEN remakes) to accompany them on the trip with the hope of pairing her off with Michael’s best friend Ian (the wonderfully named Travis Van Winkle). 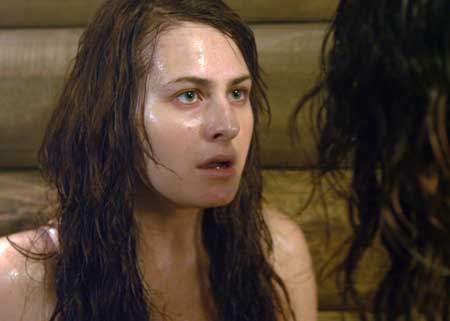 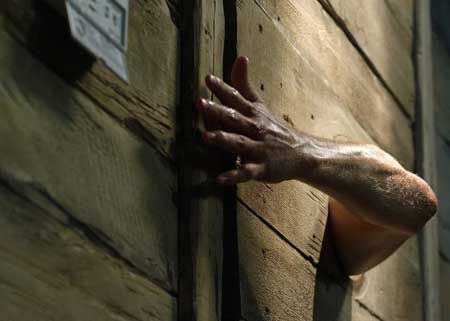 Before they head out to an exclusive party to which they just happen to have snagged invites the four friends decide to make use of the cabin’s custom built sauna. It’s at this point that the film stops being a tedious teen drama of no more interest to horror fans than an episode of Dawson’s Creek and becomes a tense and claustrophobic peril movie. What happens is that on returning to the sauna after a brief plunge in the lake Michael (somewhat optimistically, considering how much he has had to smoke and drink) decides it’s time to play hide the salami with Renee who quite understandably declines his gallant offer. As his friends luxuriate in the sauna he stomps around sulkily outside, knocks over a load of furniture and wanders off to pass out. After letting off steam (if you’ll pardon the expression), Renee decides to go and find Michael but discovers to her horror that the sauna door is blocked and that she, Ian and Jenna are trapped. 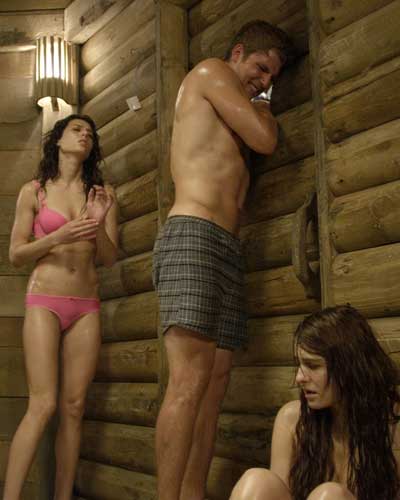 There’s not much room for characterisation in a film like this but that’s no bad thing; what we’re really interested in is how resourceful the cast are and which, if any, of their increasingly desperate attempts to escape will be successful. I particularly liked the way that seemingly inconsequential details turned out to have potentially life-threatening significance. Some might say that such details are mere contrivances but films of this type are contrived and that’s kind of the point. Let’s face it, if the characters hadn’t contrived to get themselves into this ridiculous predicament then we’d all be watching something else. 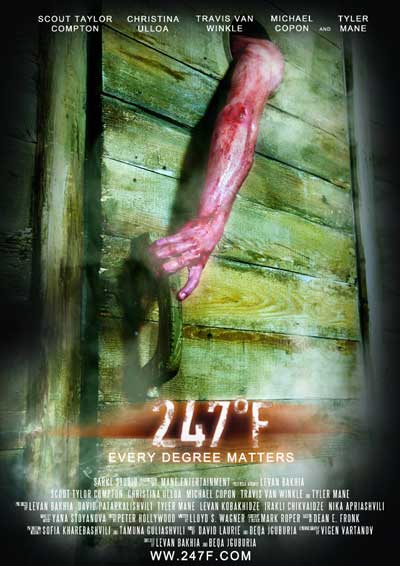 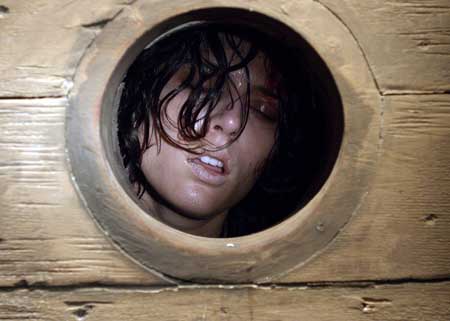 Ultimately though the film’s situation proves to be too restrictive to allow it to work effectively. Director Bakhia finds himself caught between a rock and a hard place: on the one hand, setting the entire film inside a tiny sauna would be an incredible risk; and on the other hand including sequences outside the sauna breaks the atmosphere of claustrophobic tension. So what happens is that Bakhia builds up a fair head of steam (if you’ll pardon the expression) and then lets it all dissipate by cutting to an external sequence. That said it’s perfectly watchable, the cast battle hard against some clunky dialogue, there’s a logical and satisfying climax and you’ll learn more about the fine points of sauna engineering than you ever cared to know.