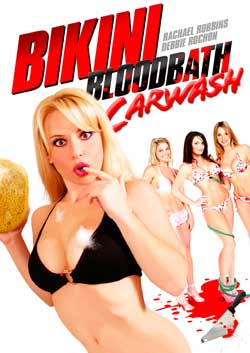 A group of hot college girls decide to raise money and pulses by donning bikinis for a car wash. But a maniac chef is prowling about to get a cut of the action.

My mom always taught me from a very early age that if you had nothing nice to say to not say anything at all. As a reviewer for HorrorNews that is not exactly the path to take. There are good books and movies. There are GREAT books and movies and then you have Bikini Blood Bath Carwash. This is the type of movie that makes it very difficult to say something nice. It is so far out of the “watchable” category of movies that it is actually painful to pick this monstrous pile of crap apart to find something redeeming. I know, I know that is pretty harsh but that’s life. 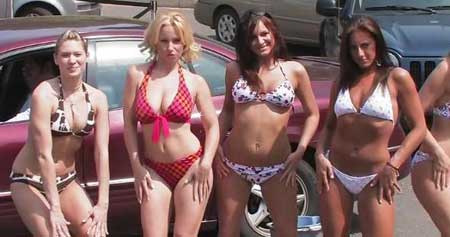 Within the first few minutes you pretty much get the overall vibe of what Bikini Blood Bath Carwash is all about without ever getting or understanding what the point is. Even crappy movies have to have some sort of point; an end game if you will. We start off strong with some 80s style heavy metal which is always good. Then it gets a little batter with chicks in underwear and one without. Of course they can’t act worth a damn but no one is going to watch this hella bad movie for good acting! This is all before the opening credits finish. This brings me to the next reason that proves this is horrible… it lists written and directed by as being “Who Gives a F*ck” – I’m serious here. This pretty much sets Bikini Blood Bath Carwash up to be the complete and utter train wreck that it will soon become in 3… 2… 1.

The characters are mostly nameless. There’s a high school filled with a handful of “kids” in their 30s wearing t-shirts with lovely descriptive character stereotypes like, “High School Student” and “German Foreign Exchange Student”… there is even a guy that’s supposed to be Cobra Commander and the “teacher” is Professor Shipwreck. Maybe it’s supposed to be a college? Beats the hell out of me! My feeling is that the demographic here is the same that watches Honey Boo Boo and thinks it’s the second coming of Shakespeare.

At some point we learn the girls are part of some sort of bikini washing business so more girls in bikinis washing cars. Pervert teacher. Morons in t-shirts show up and… dance. Horribly I might add. If you would ever see my wedding video of me and my new wife dancing you’d cry laughing at how bad it was. I dance like I have no feet and I’m too deaf to hear music – this was worse… much, much worse. A new applicant arrives on the scene and a knife fight ensues between her and the owner. Not just ANY knife fight but one set to a piss poor instrumental interpretation of Michael Jackson’s iconic and memorable song, “Beat It”.

45 minutes into this crap we’ve yet to get the gist of what the hell the thing is actually about! That is until a couple girls in pajamas put together a homemade Ouija Board made out of a bath towel and scraps of paper. Now I know where the budget went to at the very least. Now it all comes together! It is hand delivered to us in a box with nice shiny wrapping paper and a bow on top. The girls contact the spirit of a murderous chef that one of their own had killed after raping him in the ass with a rake (I can’t make this stuff up!). Their actions cause this murderous chef to rise from the grave to continue his butchering of young girls in bikinis. 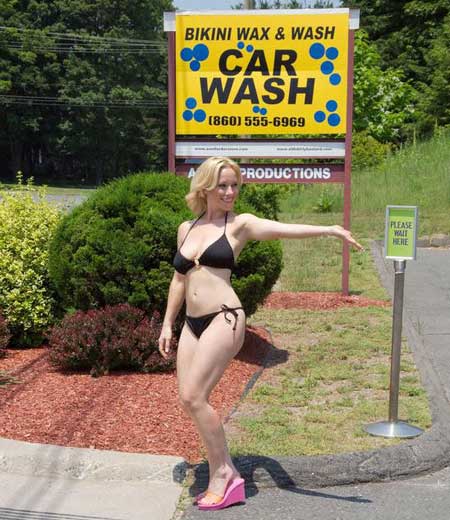 Bikini Blood Bath Carwash is made in the vein of 80s schlock horror like “Alien Surf Nazi Hookers” type of stuff. Aside from the god awful acting, crappy repetitive music, piss poor special effects, and a complete lack of story let alone continuity this is a definite don’t waste your frakking time. It is a great little bloodfest if you are into those schlock horror movies. Admittedly they are not my cup of tea since I like story. However, if you want a movie you can watch while getting drunk enough to pass for a coma patient then go for it.
½ Bloody Sponges for this… this… colossal waste of time.