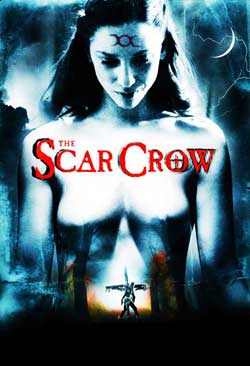 From 1450 for 300 years European communities panic with the fear of witches living among them. The witch-hunts seek out, torture and murder ten’s of thousands of mainly women. The 3 Tanner sisters live in fear after their mother is hanged for witchcraft, in her absence their father takes advantage of his daughters leaving the family somewhere between life and death cursed for an eternity

When watching The Scar Crow it is difficult to believe it was only released in 2010 as I was reminded of all the “so bad they were good” films around in the 80’s. Unfortunately this pleasant feeling of nostalgia didn’t last very long as this was more of a “can a film really be this bad” experience and when it was over it was difficult to believe it was released at all. 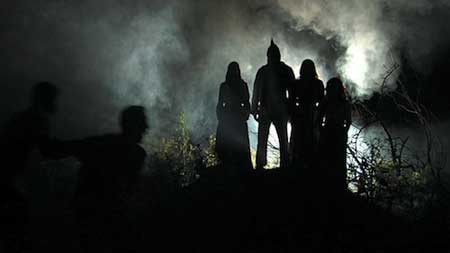 The film opens in the 17th or 18th century with scenes of a woman, known as Elizabeth Tanner, being hung as a witch while a group of scruffy looking peasant onlookers hurls abuse and rotting fruit at her. The group includes the woman’s husband and three horrified looking daughters. As Elizabeth swings limply from the branch the crowd slowly disperses and the film moves on to the Tanner farmhouse where a simple family meal has been prepared. This is interrupted when the seemingly intoxicated father sexually attacks one of his daughters, something which is implied to be a regular occurrence. This time however the girls defy him and fight back resulting in the father being killed in the ensuing struggle. As they panic, and ignoring the obvious option of burial, they decide to dress him up as a scarecrow so that he can then work the land for eternity.

We are then introduced to four guys on a team building exercise. Daz, Tonk, Nigel and Joe are treating the weekend as a jolly and we see them larking around and ignoring their instructor’s words. When they are left in the middle of nowhere and told to make their way back to base their only thoughts are to find a local pub and arrange for a friend to collect them rather than rough it in the great outdoors. As they wander through a field they meet the three Tanner girls Vanessa, Prim and Proper who have not aged a day and who tell them of a pub in a nearby village. They also extend an invitation to join them later in the evening for a nightcap and suggest their unused barn as a place for the guys to spend the night. The guys are so thrilled with this turn of events that they even put off their arranged evening pick up until the morning. While at the pub the landlord tells of a curse on Gravehills Farm, the Tanner home, and urges them not to return, offering alternative accommodation. The offer is declined as the group sense romance in the air; although they put it a little less succinctly.
After several more drinks, and loaded up with supplies, they stagger back along a track to the farm. One of the group lags behind saying he needs to relieve himself which for some inexplicable reason he decides to do on a scarecrow. As he does so the apparently inanimate figure stirs which leads to a particularly unpleasant close encounter! 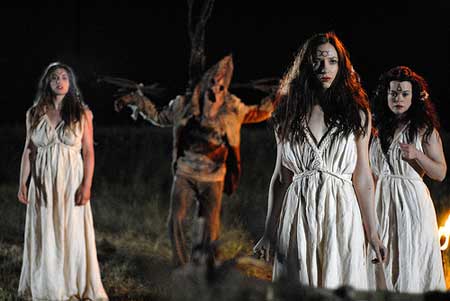 The plot then slowly emerges and primarily through flashbacks we learn that despite many, many attempts at burial the father will not rest and with his dying breath cursed his daughters to live on the farm with him for eternity. In a peculiar montage scene the girls search through their late mother’s belongings looking for spells and eventually find one they believe will release them, and their father, if they sacrifice a soul for each of theirs that is cursed. What then follows is a tedious and disjointed story that never quite seems to know what it is trying to achieve and which leads to many problems.
To begin with the film is too dark.

I appreciate that the majority is set at night or in rooms lit by candlelight but even taking this into account it is difficult at times to see what is going on. The script is extremely leaden and the unknown cast struggle without exception to deliver their lines with any conviction. There are moments when the performances are so awkward and unbelievable that I cringed. The characters are also a major problem. The guys are so extraordinarily unpleasant and disgusting in their mannerisms and personalities that at no point are you hoping for their survival. They are hideous caricatures of lad’s culture and I suspect many viewers may even be offended. As for the girls they are wooden and shallow, and for some reason speak in what I imagine is meant to be a 17th century accent but just comes across as a stunted, upper class way.

When we arrive at the point of the sacrifices themselves, and I am giving nothing away here, the writers have decided that some very ill judged eroticism is in order. Heaving bosoms are released and one of the guys is tied semi naked to the bed to await his fate. The problem is that these scenes are just not sexy. It is as if they have been shoe horned in just for a little tawdry titillation and has no bearing on the story at all. The witchcraft element which is alluded to on several occasions is handled badly and quickly skimmed over leaving the viewer a little confused as to the reasoning behind many of the characters actions. 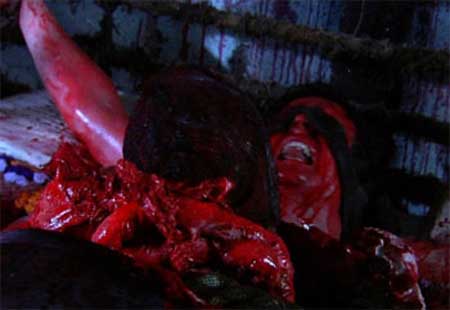 As you may have guessed I didn’t enjoy this film. The co-directors and co-writers Pete Benson and Andy Thompson have not succeeded in producing a film that works on any level. There is nothing I could find here to praise and I would avoid it at all costs. There isn’t even a valid explanation as to why the film is called The Scar Crow! 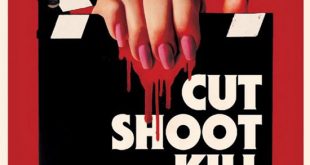 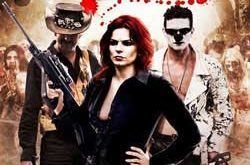 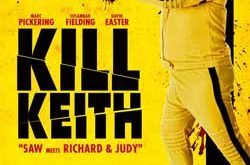