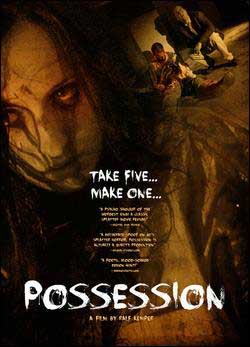 Five friends find an old bunker in the forest. There, they meet a demon that resumes to split them up. Possessed by the Demon attempting to split them up into five parts – making each of them to attempt to take possession of one friend – in order to play them off against each other. Only one of them is strong enough and smart enough to unite all parts again. The others have to die… A contemporary quality horror film with brains, successfully spoofing classic 80’s splatter films, while building on the growing prominence of its creator, Ralf Kemper, director of Toxic Lullaby and winner of New York Horror Film Festival Best Picture Award.

These days anyone can become a filmmaker. If you have an iPhone, a netbook, and a Microsoft Moviemaker you too can make a movie. Sure – it may not become a blockbuster of any renown but, at the very least, you can say you tried, right? I don’t know if an iPhone was used in the making of “The Possession” but I think the picture could have been more clear and crisp if it had been. None of this stuff makes a movie bad by any means and even a movie as poorly constructed as this one can still have a following. I’m quite confident that a drinking game could be created around this movie.

Essentially if making a cult-style b-movie from the 70s was the goal then the film makers hit the nail on the head. If you like movies with that sort of… edge… then you, my friend, are in luck! Are you a fan of Maniac or Chopping Mall? If yes then hot damn! Feel free to grin from ear to ear because this movie, though new, is dead on vintage. From the acting, poor lighting, odd shooting angles, inane make-no-sense writing, and choice of color filters it screams bad 70s and 80s… in a good way if you like that sort of thing. I hope that it is since this motif persists through the entire movie. Oh ya – It adds some overly artistic touches to the movie which are wholly unnecessary. 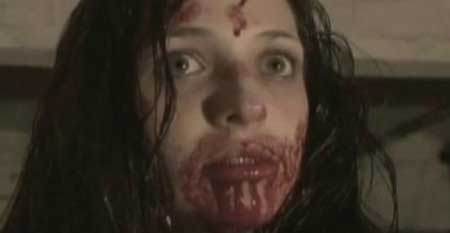 If you liked Cannibal Holocaust but could have done without the stake scenes or the killing of a sea turtle then give “The Possession” a watch. It has the potential of becoming a well-liked underground cult classic. As an added bonus if you happen to be a fan of weird renaissance music mixed with disjointed synth-pop then you might want to consider picking up the soundtrack if it is available. It would be like if you hit the lottery… twice!

So what exactly makes this scrumptiously bad? Well – the movie lacks setup. It makes no sense. We open with a group of people walking on a dirt road. Why? I don’t know! I’ve got NO idea and what’s worse is that they don’t bother to tell us why they’re walking on a dirt road instead of driving. It is almost like their plane had gone down and they lucked out to survive. They’re headed to meet friends which is gleamed from the forced dialogue. There are a total of five people walking. All are atypical stereotypes. We have a slacker, a skank, a guy in a suit, a goth reject from the Blair Witch II Broadway Revival show, and a prude. Basically they are all interconnected… somehow but these people make no sense as a group.

There is a lot of blah, blah, blah as they reach the campsite, village, or whatever it is supposed to be but no one is home. Instead of walking back down the dirt road they venture out to look for them. Do you think this would add some excitement to this jaunt? Nope. They uncover a cave and decide to go inside because that is a logical place for people to go. Of course it isn’t a cave – I doubt that was in the budget. It is some underground garage or drainage tunnel or something. The slacker finds a beer and determines it’s still fizzing so it’s still fresh.

The Possession wouldn’t be a movie about possession without some unseen force. Whatever it is it apparently causes people to go nuts and eat each other as well as doing other crazy, out of your mind stuff. The demon made this parking garage (yea – I don’t get it either) and it is its lair and subsequently turns any human who ventures down into its belly a human devouring puppet. All of a sudden, out of the blue, the Blair Witch II reject begins spouting off who, what, where, why, and how of the demon.

Toss in random lesbians, a nonsense c-story, and derelict buildings in the middle of nowhere (to have the lesbian sex in of course) then you pretty much have the gist of Danish storytelling. High-concept, low quality and very, very little sense to be made of any of it. There are interesting… quirks. They make no sense of course and I would suggest watching this movie with a bottle of bourbon. It would also be wise to create a flow chart as you move forward in the nonsensical story and make-no-sense plot.

A true fan (which, admittedly, I am not) of sensationalistic schlocky 70s horror would adore “The Possession” to hellish non-cave and back. Be warned though that sometimes the dialogue is often hard to discern through poor dubbing and accents. All in all I give The Possession 4 out of 5 pea soups if you’re THAT person… 1 out of 5 pea soups if you like something more… modern and cohesive.