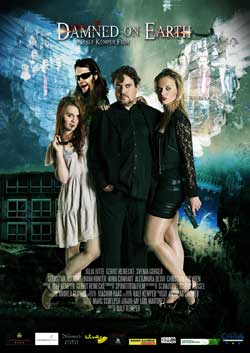 The ordinary Hell official Amon is assigned with a strange task by Luzifer: Together with the chaotic, sex-crazed Samsaveel, he is in charge of stopping Belial, Prince of Hell, who’s gone out of control. In order to claim the thrones of Heaven and Hell, he uses a female body as a host, outwits Amon and Samsaveel and kills an angel. With this murder, he sparks a terrible war, because the forces of Heaven and Hell were supposed to balance good and evil on Earth. For centuries, they never raised a hand against each other. Until now…

There’s a lot going on in Damned on Earth, so keep up. Belial, the Prince of Hell, has escaped from the fiery depths below and, as a result, Hell is literally freezing over. Amon (Gerrit Reinecke), a low level demon, is tasked with tracking him down. But it’s not going to be easy. His partner Samasaveel (Sebastian Rückert) is a lust filled devil kicked out of hell for raping human women, who’s more interested in swinging his two foot purple sex toy around his head than getting work done. Then there’s the issue that Belial has possessed one of his own victims, and now no one knows what he looks like anymore. Oh, and Heaven is getting involved sending their top agent to capture Belial as well. When Belial kills the angel, an ancient pact is broken and Heaven and Hell are about to go toe to toe and the world is caught in the middle.

Low in budget, Damned on Earth makes up for it with heaps of high concept novelty throughout. Each main player in our tale is introduced via a Top Trump card graphics detailing their stats and mission in life. Jesus’ mission is, apparently, not much. Aside from some moments of grandiose pantomime towards the end, heaven and Hell react to each other like disgruntled work colleagues, with Lucifer and Gabriel being particularly snappy at each other. Then there’s the hellmouth Samsaveel has constructed in the basement of his house that’s in the shape of a giant… Well, I’ll leave that for you to find out.

Let’s be honest, Damned on Earth, with its blasphemous approach to pretty much everything, is sure to offend a fair few people, but it’s very unlikely that director Ralph Kemper is going to care anytime soon. And nor should he, as what he’s given us is a balls to the wall action comedy that’s two parts Dogma to one part Cradle of Fear. It’s often crude, often childish, and often very funny.

That said, it can often feel like Damned on Earth is reaching for low hanging fruit in its pursuit of its theological sniggering. For example, Jesus is portrayed as a gluttonous, balding, pervert drunk on his own success and a perpetual whiny child looking for Dad’s acceptance. Yes, it’s funny, but taking a swipe at the messiah has been done before, hasn’t it? Conversely, whilst Damned on Earth sticks its boot into the Bible and takes pot shots at admittedly easy targets, it resolves a mystery surrounding God and Satan in a surprisingly touching manner. It’s this fresh mixture to theology and head explosions that makes the film so much fun.

Performances are admittedly varied, but it’s disingenuous to say that everyone isn’t clearly having a blast. Whilst Reinecke acts as the straight man/demon caught in a battle between good and evil, Rückert throws himself in at the deep end, swearing and leering at anyone in the way of him or his disturbing libido. For reasons best kept secret for the sake of the narrative, he later passes this rambunctious role over to Julia Jütte, who gives Samsaveel an extra dimension of sleaze.

As the tension between heaven and hell mounts, Lucifer and Gabriel begin to draw their armies together for war and Damned on Earth draws one of its best cards. Whilst the denizens of both realms land on earth with superpowers all intact (lighting, super strength etc.) and nearly indestructible bodies, they’re still susceptible to pain and fragile bones. There is something grotesquely funny about watching two people trying to beat each other up with flailing and unworkable limbs.

If you don’t like what you see, at least let the awesome rockabilly soundtrack fill your earholes. Damned on Earth is, if you’ll excuse the pun, a helluva watch. Leave your sensibilities and sensitivities at the front door and settle down for an evening of blood-splattered demonic warfare.