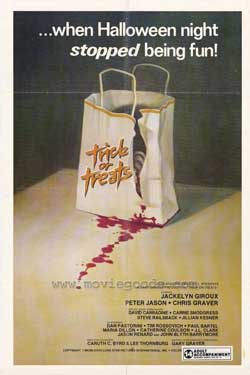 Several years after his wife had him committed in an insane asylum a man breaks out on Halloween night and terrorizes his son and the young woman who is babysitting him for the evening.

What do you get when you take Halloween and Nightmare in a Damaged Brain and get rid of all the elements that make each movie great? You get Trick or Treats. I first saw it back in February of 1995 when I had the flu and was so sick that I was throwing up every ten minutes and I can’t help but wonder if part of the reason I felt like shit was due to the fact that I was watching this movie in between trips to the bathroom to puke my guts up. To be fair though I watched it again not too long ago when I wasn’t feeling sick (I thought that maybe my judgment was clouded due to the high fever I had when I initially watched it) and I still didn’t really like it that much.

One of the biggest problems I had with it was the fact that it was just boring. Nothing exciting ever really happens and the body count is basically non-existent. How the Hell can you have a slasher flick where hardly anyone dies? For some unknown reason writer/director Gary Graver and the other guys responsible for this film thought that it was a good idea, and instead of some cool, gore-filled death scenes we are subjected to scene after scene of boring dialogue for over half the movie. 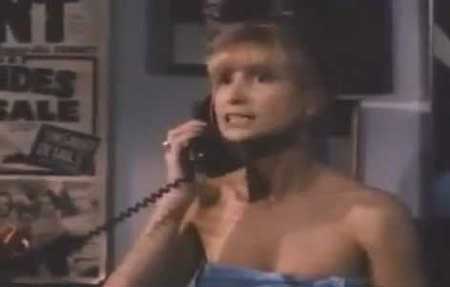 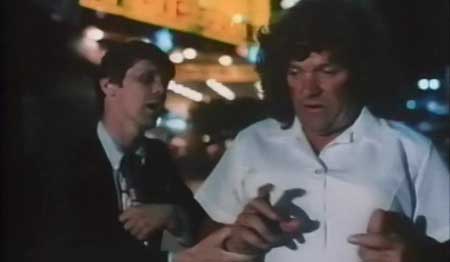 As I said previously the plot is basically a watered-down version of Nightmare in a Damaged Brain (which is a much better film) with a dash of Halloween (also a superior film) thrown into the mix for good measure. I was expecting the escaped lunatic guy to go on a massive, blood-soaked murder spree that claimed the lives of a number of people after he escaped from the mental hospital but it didn’t happen. What happens then? There are a lot of boring scenes where he sneaks around harassing the babysitter and his son until he finally kills an insignificant character. If you decide to watch this movie don’t expect a lot (or any, if you ask me) of fun death scenes or you will be setting yourself up to be let down big time.

Another problem I had with it was the fact that I didn’t like any of the characters. I was wanting the annoying little brat the babysitter is looking after to die horribly just a few seconds after he is introduced but it didn’t happen. Linda (the babysitter) is basically a Laurie Strode clone (only not as likable) and Malcolm is probably the least intimidating psychotic killer to ever appear in a slasher flick. David Carradine pops up briefly as Malcolm’s ex-wife’s boyfriend, but he doesn’t really do anything worth mentioning here. 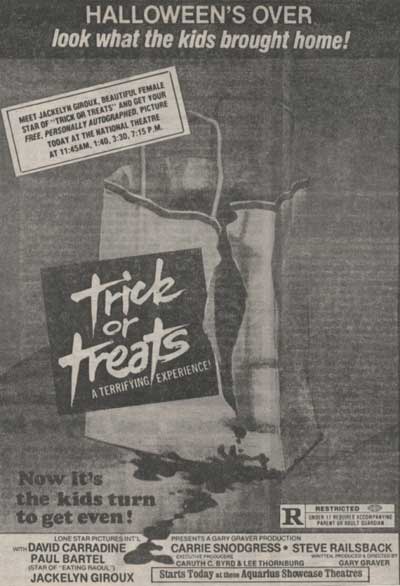 The ending is silly and predictable as Hell as well. I think that we are supposed to be surprised and taken aback by it, but most viewers will see it coming a mile away. As a matter of fact, it is so similar to the ending of Nightmare in a Damaged Brain that I would say that it is a blatant rip-off. The filmmakers were going for a shocking twist at the end that was supposed to leave viewers speechless but they missed their target by several hundred miles. 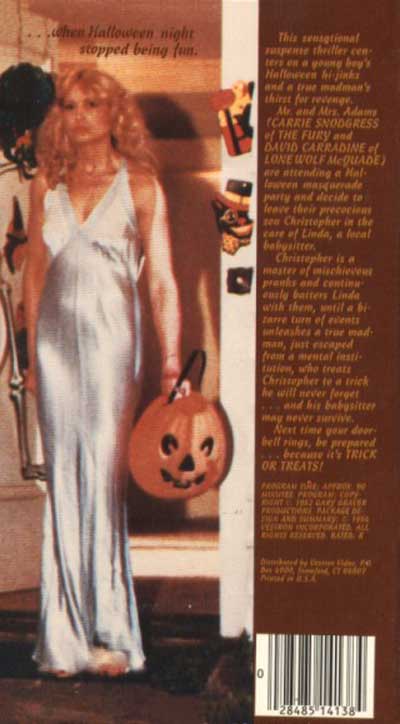 Trick or Treats is pretty bad, which sucks because I really wanted to like it. On the bright side, there are several moments that are unintentionally funny that you can laugh at (the insane asylum scenes are hilarious if you pay attention to what some of the patients are doing in the background, and the opening scene where the guys in white suits are trying to wrangle Malcolm up so they can take him to the booby hatch is comedy gold). I also dug the low-budget, poorly lit, grainy film quality that the movie has as it gives it a nice retro vibe as well. I really can’t recommend this movie to anyone who wants to see an awesome old school slasher flick, but if you want something that you can watch with a group of friends so you can laugh at how cheesy it is then this is the movie for you.