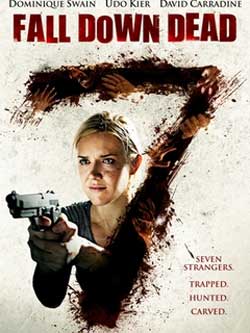 It’s Christmas in the big city and this Christmas comes with the unwanted gift of rolling blackouts. Adding to the holiday stress and taking full advantage of the darkness the blackouts bring is the Picasso Killer, a serial killer who incorporates the flesh of his victims in to his grisly works of art. But now the Picasso Killer has seen Christie, a single mother with dreams of living in the country with her daughter, and he needs her face to finish his masterpiece. Trapped inside an office building on the night of Christmas Eve with the Picasso Killer and two detectives she must use her tenacity to survive the night or become immortalized in the Picasso Killer’s collection.

Best line: “I shall cut off your tongue and use it to dab your blood on the canvas.”

Fall Down Dead is a good movie. It took about half way through the film for me to realize, at its core, it’s a slasher film. I wasn’t expecting that. I was expecting more of a crime procedural in the vein of Silence of the Lambs (1991) or Horsemen (2009). But there’s no mystery to solve here. In fact, we see the Picasso Killer’s face in the first five to ten minutes of the film. Udo Kier, who played the cinephile in the Masters of Horror episode John Carpenter’s Cigarette Burns (2005), does a fantastic job as the Picasso Killer, a psychopath who creates works of art out of human body parts. His performance is impressive because his craziness isn’t over the top, it’s just …off. 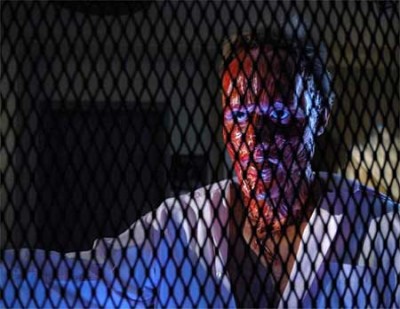 Dominique Swain, [Face/Off (1997), Lolita (1997), Alpha Dog (2006)], should probably win some sort of an award for “Greatest Freak Out Ever”. In a scene where she is being chased by the Picasso Killer, she gets to a locked glass door at the front of an office building. David Carradine [Kill Bill Volumes 1 and 2 (2003 and 2004, respectively)] plays a security guard at the building who isn’t necessarily the sharpest knife in the drawer and is fumbling with his keys as Dominique positively LOSES HER MIND as the Picasso Killer gets closer and closer. She was awesome.

Mehmet Gunsur, a well known actor in Turkey, does a very good job as Detective Stefan Kerchek, a character that had more depth than was absolutely necessary. That was okay with me though. I like to be invested in my characters. It makes me care about their well-being. R. Keith Harris [Big Fish (2003)] plays his partner and he has a David Caruso / William H. Macy charm about him.

The other character in the movie that was enormously effective when used was the rolling blackout within the city. In the first half of the movie the filmmakers did an excellent job of creating a character out of that one unfortunate, unpredictable incident. I think they really missed out on a golden opportunity to incorporate that aspect into the tension of the film. When they did, it got my attention. 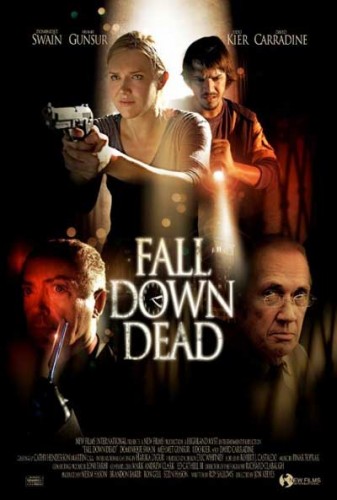 All in all though, Fall Down Dead isn’t a bad movie at all. The gore is plentiful without being over the top. The killer is maniacal without being Jack Nicholson whacko. All the characters are believable, though the killer, in traditional slasher fashion, has an uncanny knack for being everywhere at all times…) This movie is worth viewing… heck, it’s worth seeing for the exceptional losing of the mind by Dominique Swain alone.