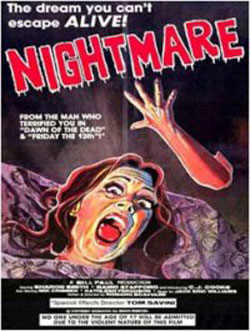 A mental-patient, who is troubled with horrible nightmares, has escaped from his hospital. Now on the streets, he can’t help killing innocent people. But there is one family he is more than interested in and when he tries to kill them, he finds that it’s not that easy.

Hell-o, gore hounds and and maidens of the macabre. Today’s review is of a gorefest of a film called Nightmare. Before I get too deep into the pools of festering blood for this review, here are some little facts all of you should know. Even if you’ve seen the film already, there have been some changes from its original working title and some misprints (on advertisement posters and the film itself) that the film-makers decided to keep tagged to the film (to sell more copies). The original working title of the film was actually Nightmare in a damaged brain. The title was shortened to simply Nightmare as it was released. 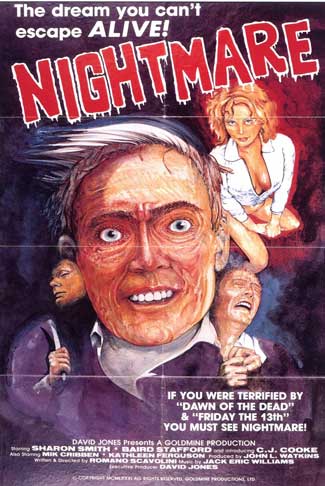 In the film, during the opening credits, it gives Tom Savini credit for the Special Effects Supervisor. He had nothing whatsoever to do with the film. When I had the excellent experience of hanging out and working with him for almost two years, I asked him about Nightmare on my first day of meeting w the man, the myth and the legend. I heard straight from the Gorefather’s mouth that he was not in any way attached to this film(even though he is credited in the film and ad campaign). Tom explained to me that they asked him to work on the film but he refused. Afterwards, they patched his name to the credits and posters that were soon all over New York. Tom demanded that his name was covered on the posters, but the movie had already gone to print. If you are a fan of Tom(especially a long time fan), you can clearly tell that this is not his doing. I’m not saying by any means that it’s bad, it’s just not as good as Tom’s work. With that said… On with the review… 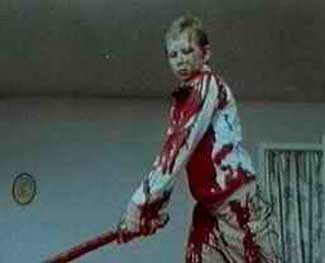 Nightmare starts off brutal from the very first scene. We see a man having sex with what seems to be a prostitute. Suddenly, she is decapitated and George Tatum wakes up screaming in a mental institution, in which he was committed for the sexual mutilation and murder of a Brooklyn family. He is sedated and calms down, but the “nightmare” has just begun. George was put in a mental home called Brastim. He was used as an experiment in a drug program. Somehow, he is set free. His Doctor, Paul, thinks he is able to function in society again, but his partners in mental health strongly disagree. They think he is a crazed escapee on drugs and capable of hurting others, or killing them. George motivates from state to state as the clinic tracks him down… From New York, to South Carolina, to Atlanta and then to Daytona Beach, Florida. 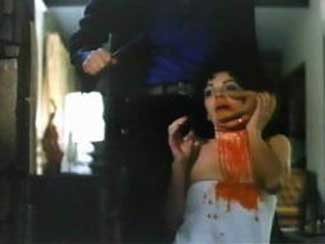 A single mother and her family is soon stalked by the crazed state stalker. He calls and harasses them in a Scream, Are you in the house alone or Black Christmas (original, of course) sort of way. He stays silent as the nine year old child, C.J., answers the phone. When the mother finally does, he talks about seeing her body. He later calls and tells C.J. To get out of the house. C.J. Is a prankster of a graphic nature. He likes to play violent jokes on his babysitter and family. Soon, he complains of someone following him. No one is sure what to believe. He becomes the boy who cried murder, until the finale, as the stalker actually enters his own home. This leads up to one twisted ending. 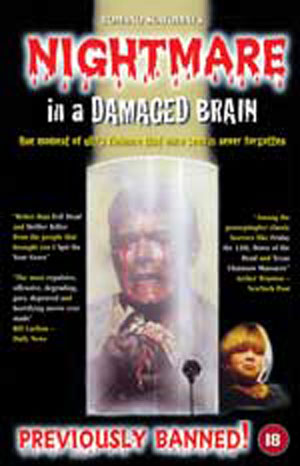 As far as direction, there is one shot that could be compared to the original The Shining or the new French film Inside. The acting is decent and there is enough blood, sexual connotation and nudity to satisfy anyone that thirsts for these glorious factors. Some may compare it to Bill Lustig’s Maniac (which Tom Savini did work on and starred in as well) For a good ol’ sleazy gorefest of a film, check this one out.

Until next time, this was Jay. Keep one foot in the grave, one fist in the guts and your eyes out for gore. Later.