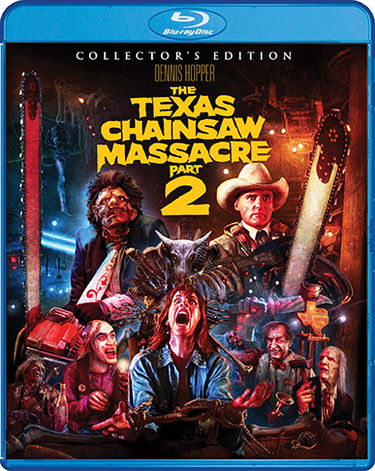 A radio host is victimized by the cannibal family as a former Texas Marshall hunts them.

Throughout the 80’s and well into the 90’s the production team of Menahem Golan & Yoram Globus were quite familiar to genre fans worldwide. Their company, The Cannon Group, was responsible for quite a few horror/sci-fi/fantasy/action films during this period. They even won an Oscar for best foreign film in 1986 for their Dutch production of a film called “The Assault”. But what they really excelled at was producing sequels to films that were produced by other companies. They were responsible for all of the “Death Wish” sequels after “Death Wish 2”. The Chuck Norris “Delta Force” films were all Cannon films. Most of these films were low to mid budget affairs but they did dip their toes into the big budget pool a few times. The sci-fi/horror pastiche, “Lifeforce” (1985), is an example of their big budget forays (And a personal favorite of mine as well). It was basically impossible for a few weeks to go by without a new film from Cannon being released, in 1986 they produced & released an amazing 43 films! 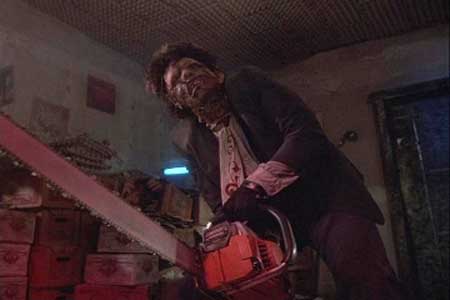 The director of “Lifeforce”, Tobe Hooper, also directed one of the seminal films in the horror genre “The Texas Chainsaw Massacre” (1974) which is not only one of the greatest horror movies of all time but I daresay it is one of the greatest films ever released of any genre. It basically changed the rules for every horror movie released afterward and it still chills my blood to this day. Cannon thought it would be a good idea to produce a sequel to it and have Hooper in the director seat once again and in 1986 “The Texas Chainsaw Massacre 2” was released to an anxious public. Starring Dennis Hopper “TCM 2” continued the saga of the cannibalistic Sawyer clan and it’s chainsaw wielding madman, Leatherface. But the question was…did the original film really need a sequel?

The film (Written by L.M. Kit Carson) opens with a pair of yuppie jackasses driving a sports car along the back roads of Texas headed to a party. One of them has a pistol and is shooting out road signs as they recklessly drive past them. They’re listening to radio station K-OKLA as they wreak damage on the poor defenseless signs and take some time to call in to the station and harass the local disc jockey, Stretch (Caroline Williams), and her producer L.G. (Lou Perryman). The two yuppie asswipes decide to play a game of chicken with a pickup truck headed towards them in the opposite direction and they force it off the road, unfortunately it’s being driven by Leatherface and now they’re on his radar. Later that evening (They’re still driving), they once again call into the radio station but as they harass Stretch they run into that same truck and it’s blocking the road as they approach what appears to be a bridge. They curse at the truck and it moves out of the way but it follows them this time and it’s being driven backwards! A horrendously rotted corpse is on top of the truck doing a macabre dance and they fire a bullet at it which only serves to anger Leatherface who is “wearing” the corpse in front of his body, acting as a sort of perverted puppeteer. He promptly pulls out his chainsaw and begins to slice and dice up not only the driver but the car as well. Unbeknownst to him though is the fact that the phone call they were making to Stretch was still live and she not only hears the carnage but she’s recording it as well, all the way up to the point where the car runs off the road. 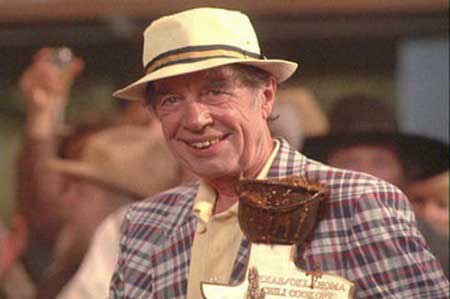 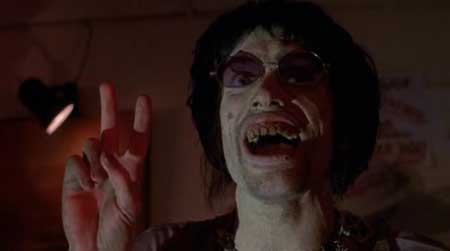 The next day the police are going through the wreckage looking for clues when Lieutenant “Lefty” Enright (Hopper) drives up to the accident site. He is immediately beset by a detective who orders him off of the crime scene. It seems that lefty has been closely following the exploits of the Sawyer clan. He has a personal vendetta against them since they murdered his niece & nephew years ago (Sally and Franklin from the first film). He is a bit of an oddball but he is still a lawman and he convinces the detective to put an ad in the newspaper asking for any witnesses to the accident. The next day Stretch goes to Lefty’s hotel room & tries to give him the tape that she recorded but he instead asks her to broadcast it on her show to flush the perps out of hiding. He’s using her as bait so that he can surprise Leatherface & family and it works really well as she’s visited by “Chop Top” (A manic Bill Mosely) and Leatherface (Bill Johnson). Chop Top beats L.G’s head in with a hammer as Leatherface goes after Stretch but she somehow manages to talk “Bubba” (That’s what Chop Top & family call Leatherface) out of cutting her up by appealing to his sexual desires. He uses his chainsaw as an extension of his manhood and thrusts it towards her crotch, basically masturbating without touching himself. He lies to Chop Top and indicates that Stretch is dead so they take L.G.’s body back to their underground lair to have it sliced up and used as meat for their food truck/catering business. Stretch follows them to their hideout and Lefty follows Stretch and the final third of the film essays the struggle they have to bring the family to justice.

I neglected to mention the leader of the Sawyer clan, that would be Drayton (Jim Siedow) who makes his first appearance in the film winning a trophy for best chili at a barbeque competition. When asked what is his secret to such delicious chili he responds that it’s all in the meat, without good meat you can’t make good chili. Of course all of the meat he uses is of the human variety but that’s his secret and the masses love it! One of the more off putting scenes takes place at the competition when someone tastes the chili and bites into a tooth, But Drayton passes it off as a peppercorn shell. Just the thought of it will leave a bad taste in your mouth. Siedow (Who also appeared in the original film) gives a performance that is hard to describe, his lines sound ad libbed in a stream of conscience kind of way. His head is never facing the camera as he goes off on tangents throughout the film, he’s never without a quip or a comment but they seem aimed at himself. It’s a brilliantly odd performance. 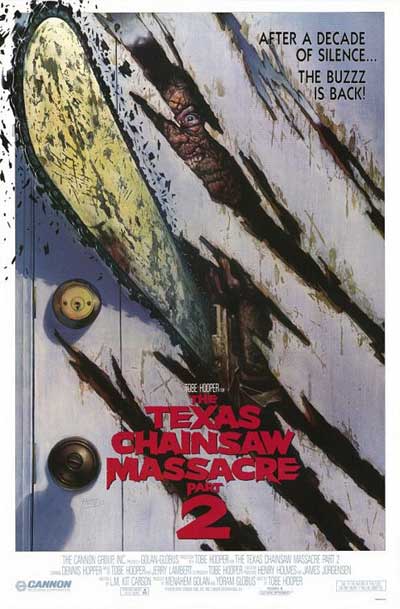 Hopper’s face is drawn in & gaunt which gives him an almost zombie like aura. His countenance doesn’t change too much until he arrives at the Sawyer’s underground maze of tunnels and even then it’s only when he starts chainsawing through the wooden beams that are holding up the dirt ceiling that we see any emotional change in his character. Williams is a beautiful woman who has charm to spare in the opening scenes of the film and Stretch seems to be a tough bird but once she is attacked at the radio station she begins to scream, and scream, and scream some more. “OH MY GOD”, “LEAVE ME ALONE”, “NO GOD PLEASE”, and so on. It became extremely annoying and I began to root for Leatherface to slice her up real good after a while. Mosely’s Chop Top is one of the most disgusting characters in the annals of horror films. His nickname comes from the (Exposed) metal plate atop his skull and he has a vomit inducing habit of heating up the end of a wire hanger with a lighter and scraping the skin surrounding the metal plate off and then eating it! It’s something he does constantly and it is just foul…and effective. More than anyone else here he looks and sounds like a complete maniac and Mosely chews up scenery as much as he chews up the dead skin from atop his head. A terrifyingly effective performance. 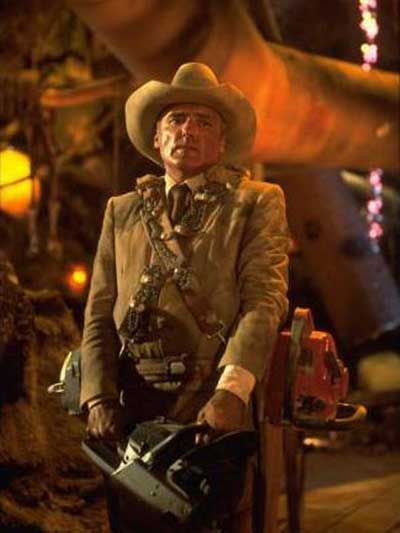 Sadly the role of Leatherface is not played by Gunnar Hansen as in the original. Here he’s played by Bill Johnson who has the size and the heft that the role requires but he has none of the menace that Hansen gave the role. He does a sort of goofy dance with the chainsaw above his head that isn’t the least bit frightening. It looks like he is revving up his feet for a few seconds before he takes off after a victim, much like a cartoon character might run in place for a few seconds before running. Johnson plays the role as something of a simpleton which would be ok if he was scary but he just isn’t and let’s face it, if a giant is standing in front of me with a mask made from human skin and he’s wielding a chainsaw in my direction…I oughtta be scared dammit!

The film is far gorier than the original and while the effects are amazing (Courtesy of master make up artist Tom Savini) they aren’t scary either. How many of you saw the original film and swore that it was a festival of carnage? Watch it again and you’ll see that there is hardly any blood on display at all. Hooper made it seem like there was a lot of blood spilled thanks to the power of suggestion and some well timed edits but here he surrendered to what he thought was what the masses wanted and tossed the red stuff all over the place. The production designer (Cary White) & Set decorator (Michael Peal) went far above the call of duty here though. The majority of the film really takes place in two locations, The radio station and the Sawyer’s underground slaughterhouse, and the amount of detail on display in both locations are amazing. The radio station looks and feels like I would imagine a backwoods radio station would be like and the assault of bones, Christmas lights & blood are spread across an enormous underground series of tunnels that has something going on visually in every nook and cranny of the set. Both locations are perfectly realized.

The movie is more of a grisly black comedy than the all out horror you might expect. Make no mistake, there are some good “Jump” scares waiting for you here but the film itself isn’t particularly frightening. Siedow’s performance alone makes it feel like you should be laughing at it rather than be covering your eyes from it. I don’t think Hooper & co. wanted to make a flick that topped the original, I think Hooper knew that was nigh impossible so he went for a mix of black as pitch humor and extreme gore. It works for the most part but there just aren’t many scares to be found here and that’s a disappointment. It also suffers from a really bad ending that echoes the original film’s ending but nowhere near as effectively. 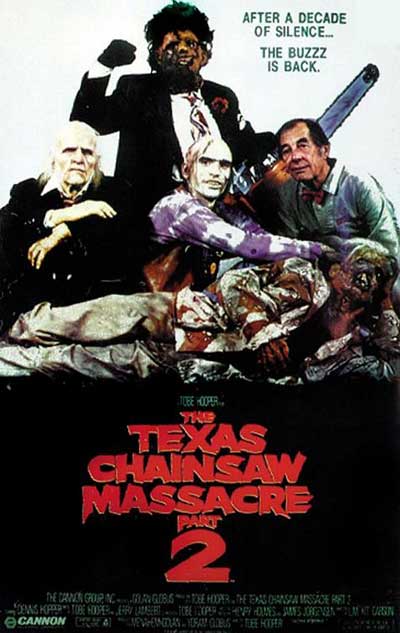 “The Texas Chainsaw Massacre 2” wasn’t the end of it either. Over the years we have had “TCM 3” (1990), “TCM: The Next Generation” (1994), “TCM” (A reboot of the series, 2003), “TCM: The Beginning” (2006) and another reboot of the series (In 3D no less) scheduled to be released later this year. So it seems like Leatherface & the gang aren’t going anywhere anytime soon but at this point in time after so many sequels & rehashes he’s worn out his welcome and I wish Hollywood would just let the poor guy rest. See “TCM 2” for Siedow’s truly deranged performance and the amazing production design but don’t see it if your intent is to be scared. It might turn your stomach a bit and you will jump out of your seat once or twice but you won’t be scared, you’ll surely be entertained…but you won’t be scared. And isn’t that what you’d expect from the Sawyer clan?