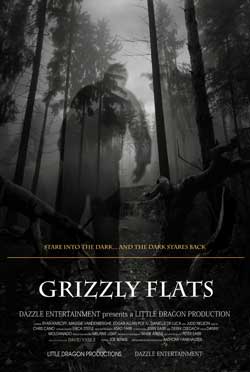 A recluse and his wife are tormented by shadow creatures.

Best line: “Nobody crawls on top of you in that bed except for me. And there’s nobody else even on this mountain…except for those damn, backwater, hillbilly McConnollys.”

Grizzly Flats is the name of a small rural community where all manner of people reside. There’s the Sheriff, played by Judd Nelson, who has a video recorder and a desire to make his mark in the adult entertainment industry. There’s the pastor of the local church with the bum wing. There’s the family straight out of Deliverance – sans the banjo – who deal in crystal meth. Then there’s Sylvain. 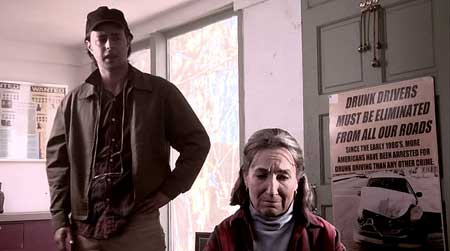 Ryan Karloff, who looks like a cross between Johnny Depp, Dimitri Martin, and an old friend of mine we used to call G Poo WiNAH-winah plays Sylvain the scientist. Sylvain lives in the woods on the side of a mountain with his wife Mary Anne. They’re not vacationing, they’re living there. They’re living there because he is on the verge of inventing the perpetual motion machine, a feat that is, by the laws of physics, impossible.

But he is a brilliant and driven scientist who believes he’s on the verge of a breakthrough, so he keeps on keeping on. Its awareness of his aptitude makes him arrogant however, and he treats his wife like a door mat. In one scene, he and his wife are entertaining a guest who is taking about the upcoming birth of his second child. Sylvain responds by indicating that his wife is barren.

This sparks a nothing if not curious turn of events involving Mary Ann adopting an immense, mutated gourd she finds in her garden as her very own child. She dresses it. She keeps it in a crib. 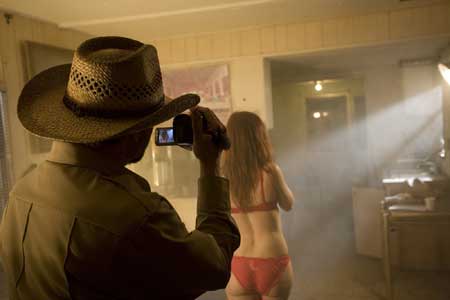 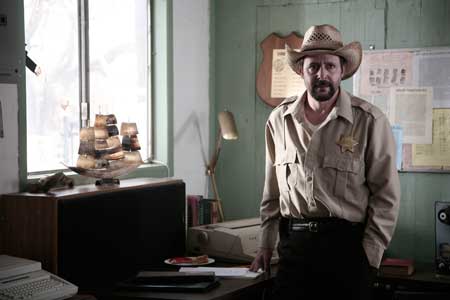 But the movie isn’t about Sylvain’s machine, or Mary Anne’s bouncing baby brussel sprout. It’s not about the pastor with the bum wing, or even about Judd Hirsch (well, maybe just a little bit about him). No, this movie is about shadow people. As you may have heard, an unnerving side effect of frequent crystal meth users is hallucinations of shadow people. This movie turns that legend over on its head and tells a story about crystal meth users fighting legitimate shadow people in the mountains. The shadow people are terrorizing the non meth heads as well, so they really do exist; albeit in much the same way as the alien in 1987’s Predator, blending in with the environment with some non-convincing CGI.

Convoluted story aside, the movie is still not very good. It almost hits some moments but never really shines through or reaches its mark. The cinematography is decent. In fact, there was one scene at the end I liked very much involving a window and blood being spattered on it to indicate a murder by shotgun. The soundtrack didn’t annoy me at all. It played in concert with the visuals on screen. It just didn’t add up to something meaningful. 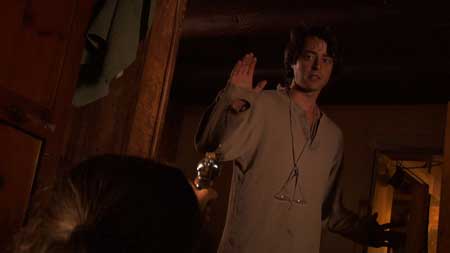 Maybe this movie is trying to harvest fans of Breaking Bad. There’s even a Breaking Bad moment when the hillbilly, meth-dealing Posey suggests that Sylvain the scientist get into the meth business with him. I don’t know. I’ve never watched Breaking Bad. I don’t like watching people smoke meth. That’s why I wasn’t a big fan of Grizzly Flats. It seemed to be a story about people smoking meth and dying. I’ve seen that movie before. It’s called Spun. Grizzly Flats just did it more tongue and cheek. I didn’t get it.