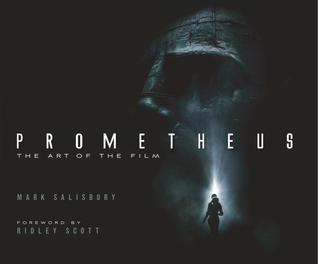 Prometheus: The Art of the Film – Author Mark Salisbury

One of the great joys of anticipating a new science fiction film is the products that arrive on its coat tails. One such product is a beautifully constructed book by the name of “Prometheus: The Art of the Film” (Hard cover bound). The foreword is presented by Ridley Scott with Mark Salisbury cited as the author. The text doesn’t overshadow the great visual aspect but rather guides you thru the pieces and very involved planning of this film.

In case you need to be reminded, this is another great product by the folks at Titan Books who we’ve covered in the past. It’s pretty much a given that their film-focused books will be full of great illustrations, photos and insight behind the production, however it still needs to be pointed out with so many books these days not up to par.

From a reviewer standpoint, I will say that I reviewed this book having “not” yet seen the film. Usually I would wait to keep from getting any spoilers in mind, but in this case, I didn’t mind seeing that there was so much to look at (and study). The book covers the entire process of production with notes and narration along the way about the aspects and process of getting such a large production under wrap.

It was the specifics of Ridley Scott that insisted on the film having as much “constructed works” as possible saving CGI only to enhance rather than to replace. The result is massive and just as massive to see the sets being constructed “before” they are lit and set to screen (check out the massive head piece set!!).

It is explained early on that the goal was to only incorporate the “Alien” franchise without it being the focus. In other worlds, the art of Giger was to be injected but also “not” to the degree of the Alien franchise had previously, Also as it is stated, the film was to be centered on a timeline before the aliens without making them the centerpiece. Ridley states, that the Aliens had outstayed their welcome and were no longer scary as previous films would introduce us to. This would set the stage for a bigger more realized universe full of interesting characters, creatures and unearthly worlds. The degree was to be massive and highly original in a genre that has seen just about everything already.

Fan of the film’s great creature creations? Then you’ll love the early concept story boards, costume deigns, photo proofs and behind the scenes construction imagery. Check out the sections on the “FiField”, “Hammerpede”, The Deacon”, and “The Trilobyte”. If that’s not enough, you’ve got plenty of spaceship, spacesuit, and associated visual aspects to drool over Hey, the photos alone are worth the price of admission, however students of filmmaking will also really appreciate the early storyboards!

The book comes in at a full 186 pages of dynamically colorful works. Much of the original art, planning and concepts are presented making this a “must have” for fans of the film. Even without it…. makes for a great science fiction art book. I believe that fans should really see for themselves the kind of work that goes into making a concept such as this into a feature film. You’ll get a better appreciation of the efforts. I was amazed at reading that the scenery was mostly real with a few large props brought in to embellish the camera view.

Once again, a great collective for your library. quality binding, vibrant colors and a whole lotta info on one the summers coolest films.