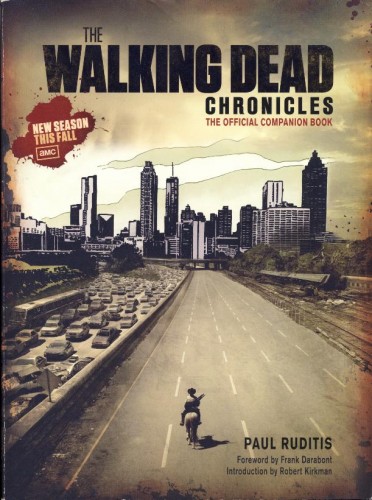 Are you a fan of The Walking Dead?  HorrorNews.net & Abrams Books is giving away a copy of “The Walking Dead Chronicles – The Official Companion Book”

All you need to do to enter is email joyhorror@horrornews.net and put “The Walking Dead” in the subject line. Please list you full name and mailing address in the body of the email.  We will be picking a random winner in a couple of weeks.  United States ONLY.

About the book
The Walking Dead Chronicles: The Official Companion Book is the only authorized, behind-the-scenes guide to Season One of the white-hot new AMC television series, The Walking Dead, which tells the story of a sheriff’s deputy leading a band of survivors in a post-apocalyptic world overrun by the undead.
Focusing on the making of the first season of the Golden Globe–nominated TV show, as well as the creation of the New York Times bestselling comic book on which the series is based, The Walking Dead Chronicles is lav¬ishly illustrated with never-before-seen unit photography, storyboards, set designs, makeup and visual effects shots, and page-to-screen comparisons of the comic and TV show. Featuring new interviews with series creator Robert Kirkman and executive producer Frank Darabont, as well as the cast and crew, the book also includes sidebars that serve as a detailed episode guide, reproducing excerpts from early drafts and final scripts, and revealing new direc¬tions for the second season and beyond.