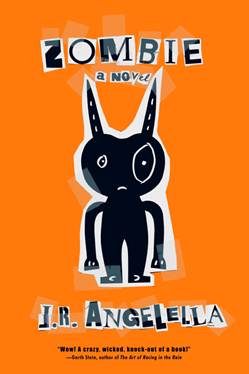 Fourteen-year-old Jeremy Barker is a zombie movie-obsessed teen who uses a Zombie Survival Code to deal with the many struggles in his life.  He attends a private all-boys Catholic high school where roving gangs of bullies make his days a living hell.  His father, Ballentine, an ex-Marine turned real estate agent, disappears night after night and comes home in the early morning all disheveled and out of it, his older brother, Jackson, is a self-diagnosed sex-addict who is no help to Barker, and his mother, Corrine, is a pill addict who never has time for her son and has moved in with another man.  The main positive in the story is Barker’s beloved dog, which is named simply “Dog.”

It is a coming of age story unlike any other, and a story not to be taken lightly.  Barker deals with many usual teen issues such as bullies, his first love, insecurities, and all of the other issues one goes through at that age.  However, he has issues that not every teen goes through such as dealing with his parents’ divorce, being a part of one of the most dysfunctional families out there, and finding out what his father is truly up to. Surprisingly, there is not one actual zombie or a zombie apocalypse in this book.  The zombies are the bullies, his parents and his crazy brother.  They are a metaphor for all of the problems in his life and the Zombie Survival Code is what he uses to get through it.

The teen finds a homemade video in his father’s closet that is so disturbing you will feel like you are right there with Barker as he watches it with horror and disbelief.  The video shows a man strapped to a bed being prepared for what appears to be some type of surgical procedure.  The violence is truly unthinkable and disturbing, and you won’t see what’s coming.   He immediately starts to trace the origin of the homemade video and the story takes the reader on a thrilling, fast-paced ride.  The unspeakable cult-like rituals are something that no one will expect and will make you want to leave a light on at night.  An eight-fingered priest at his school, who also happens to be his English teacher, is somehow connected to this situation involving his father, and Barker must find out what it is before it’s too late.

This is author Angelella’s debut novel and he is truly a gifted writer and an expert in the zombie genre.  His obvious love for the zombie genre is proven as the details of the most popular zombie movies are used throughout the book such as Night of the Living Dead, 28  Days Later, Planet Terror, Zombieland, Shaun of the Dead and Dawn of the Dead.  There is one exception which is The Greatest Story Ever Told, which a priest has hooked Jeremy into by suggesting that Lazarus and Jesus might be the first zombies ever – a definite surprise.  Zombie is one of the most original books ever to grace the horror comedy genre and it is a definite must read.  Be warned that even though the book is in a high school setting, this isn’t a book for young adults.  It is a very edgy story with plenty of adult themes and language throughout.

Zombie is a clever book with a dark and unforgettable story that will leave the reader both breathless and terrified.  It won’t be what most people are expecting, but definitely worth the time.