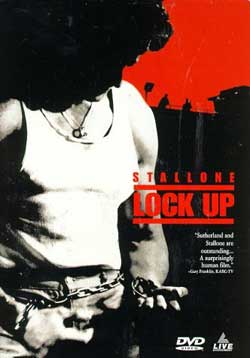 Frank Leone is nearing the end of his prison term for a relatively minor crime. Just before he is paroled, however, Warden Drumgoole takes charge. Drumgoole was assigned to a hell-hole prison after his administration was publicly humiliated by Leone, and has now arrived on the scene to ensure that Leone never sees the light of day

Sylvester Stallone is a name that brings to mind a certain range of genre styles that all follow along a similar line. Usually in his case, it involves a bit of pain, some ass kicking and the slow windup of the positioned underdog rising above. Certainly we remember this trend from the Rocky films, and not to mention quite a long list of others in this vein. “Lock Up” has our inmate hero doing time for an assault charge that went wonky. Frank Leone is not your usual criminal, in fact he has quite a heart which makes for his sense of compassion and ability to take alot of crap in favor of just getting thru the day. Though by no means a Frank Leone a pushover, he just wants to serve his time and get back to his girlfriend Melissa (Darlanne Fluegel) 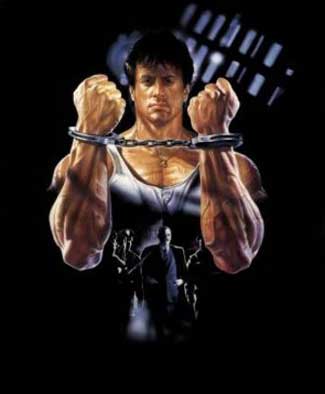 The film sets up like most in this vein with our focal character and the inevitable prison bad ass trying to break him in the process. However it’s Donald Sutherland as Warden Drumgoole that really serves the antagonist position in this case who wants Frank to do his time to pay for a past embarrassments. Leone who has been serving a light sentence at a prison that allows him to occasionally step out to work on cars, is suddenly plucked from the system and brought into the maximum security prison “Gateway” to serve the last 3 weeks of his time.

The Warden was publicly embarrassed when Leone was made out to be a hero in the media. Leone had escaped merely to pay respects to his dying father, of which Drumgoole had denied. The incident was well-publicized when the warden was working at Treadmore resulting in Drumgoole being reassigned to a hellacious prison called “Gateway”. Ever since, Drumgoole has wanted to inflict payback upon Leone.

Leone makes a few friends during his stay that over the course of the film develop into a kinship out of respect for each other. Though as suspected, Leone must constantly watch his back against some of the more violent inmates who have been ordered by the warden to give him a hard time. One of which is a large meat head of an inmate named Chink Weber (Sonny Landham) who also runs a sort of inside gang himself. Leone, a talented mechanic, gets the opportunity to help rebuild an old car. The event sparks a deeper friendship with his fellow inmates Dallas (Tom Sizemore), Eclipse (Frank McRae) and First-Base (Larry Romano) who develop an understanding among themselves. However things get nasty and First-Base is murdered (implemented by the inside thugs as a message). 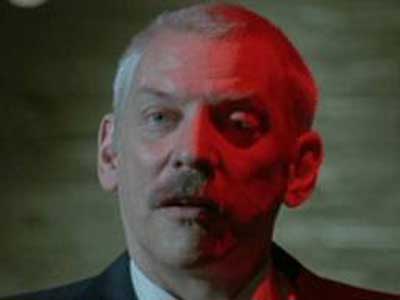 The entire premise circulates around the warden Drumgoole doing all he can to torture and “break” Leone to the point where he’ll mess up and have to serve more time. As in most of these style films, we can predict the outcome with the usual run of seeing the aggressors getting duped and shown up by Stallone. The film by no means is a great piece of achievement, but it does fit well within the Stallone action films catalog. We get plenty of fighting, abuse, comeback, dark times, build up, and gawky Stallone expressions leading us up right till the end.

The best part of this film arrives in an almost subtle sense of humor that comes with the ridiculous situations. First we question Leone getting to hold a job outside the prison and then the over the top prison vs new guy antics. I had to laugh as these prisoners who were supposed to be serving hard time were given plenty of opportunity to build up an old car, laugh about, spray each with water (homo-erotic?) and paint and giggle about like a prison sleep over party. I suppose you are expected to suspend disbelief thru all of this while the buddies have time to play in between Warden beatings and inmate shankings. 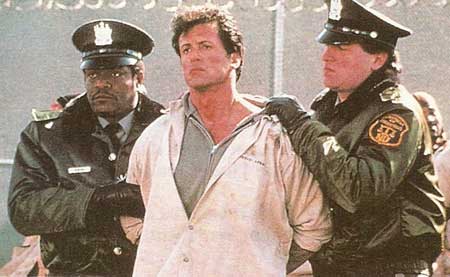 In all “Lock up” is very far from reality and designed to keep movie goers from being too depressed or bored during the “Rocky” coming-to-terms moments,

Fun perhaps, but at times very silly (unintentionally)…Hey it’s Stallone being Stallone and we all love him for that. Extra points to actor Donald Sutherland (who you really just want to kick in the nuts by the time the films over). 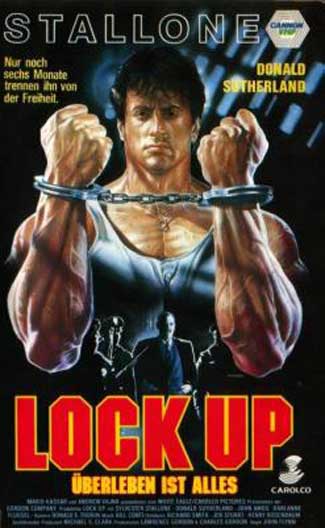 “Lock Up” is now available on Bluray per Lionsgate Entertainment as part of the recent “Stallone 3 film pack“. The collection also includes “First Blood” and “Copland“ 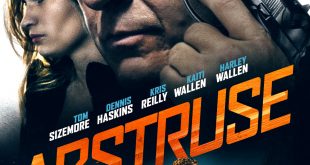