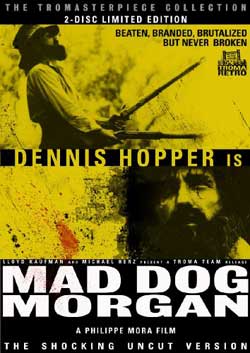 The true story of Irish outlaw Daniel Morgan, who is wanted, dead or alive, in Australia during the 1850s.

When I first saw that I had a western film to review I thought there might be some kind of mix-up. Then I saw that it was being re-released by Troma Films. Yep, Mr. Lloyd Kaufman is responsible. Okay, that’s cool but is it a movie worth watching? 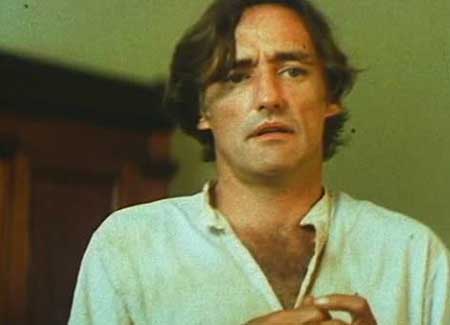 Well, it does have Dennis Hopper in it which for some will be reason alone, for others a reason to avoid. Let’s face it, even though he was one of our greatest actors, not all of his films are fun, escapist ways to kill a lazy afternoon.

This movie, to be honest, is a mixed bag. I enjoyed some parts of it and Dennis Hopper, no surprise, is interesting to watch. The dialogue can be at times hard to understand, partly from the accents and partly to Dennis Hopper’s character being drunk and, well, just being an angry Irish ex-con who seeks revenge. 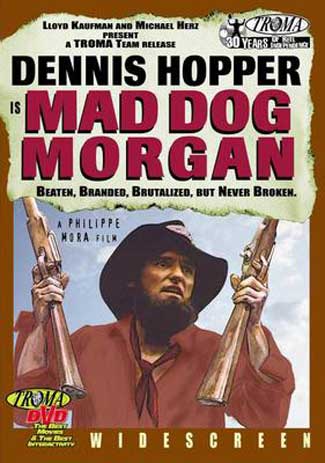 The opening of the movie sets the backdrop with the following words that appear on the screen: The film you are about to see is based on documented fact. The events depicted were filmed in the forests, caves, rivers, farms and prisons where they actually took place during the Australian Gold Rush of the 1860’s. 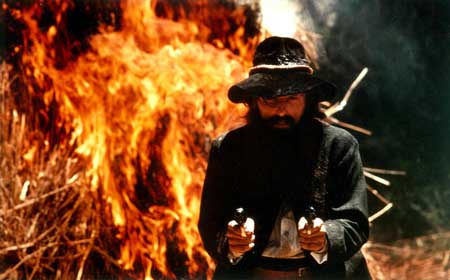 And that is what Daniel Morgan (Dennis Hopper) has come to Australia for. Get rich quick. But after an ill advised night of revelry in a Chinese-worker camp, a series of events happen that quickly find him destitute and resorting to holding up people he meets on the road. Literally, highway robbery.

And the judge wants to make an example of him. Twelve years hard labor with the first two years of the labor done in chains. He is taken to an Alcatraz-like prison where he is promptly branded and taunted and every other thing that can happen to you while in prison. And even though he only serves six years due to good behavior, he comes out a changed man. 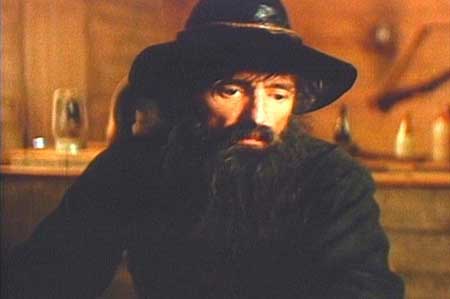 One funny moment has him practicing his new hold-up routine Pointing the guns and trying to properly phrase, “your money or your life.” Obviously it ain’t easy being a criminal. But Daniel Morgan isn’t just your ordinary criminal. Sometimes he holds people up to give them money. Well, at least those who need it. For everyone else it could mean your death if you disobey. He is an interesting character to say the least.

In the end Mad Dog Morgan is a film I would have to recommend seeing but only if you are a Dennis Hopper fan. Either that or if you just love movies dealing with law and justice back in the day when the west was wild, or in this case Australia.

For the rest I’m not sure if there is enough here. As mentioned above there are some good parts, along with two great lines of dialogue from our bad guy (they always seem to get the best lines.) The first being, “I want his spleen on my desk by sundown,” and the other, “by all means off with his head, and don’t forget the scrotum.” If you haven’t guessed this guy is pretty upset by Morgan’s growing legend. 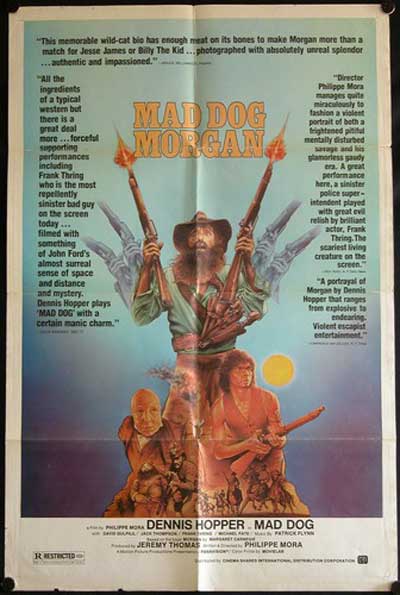 The fact that this was based on a true story helps with the overall grittiness of the film. The directing is solid but the overall production felt a little off. I’m guessing the budget wasn’t too large. Of interesting note the director, Philippe Mora, went on to direct Howling 2 and 3. Never a bad thing to be able to work with Sybil Danning.

If you do decide to watch then be ready for a film that is more of a character study than anything else. Dennis Hopper pretty much dominates the screen and even though he acts pretty much like a lot of his characters that would come later in his career, it nonetheless isn’t ever dull. If anything, it saves this film from being just another western-outlaw-drama.