In a world consumed by obsession with those in the public eye, celebrity diseases are a highly sought after commodity. Companies like the Lucas Clinic are marketing the contracting of the hottest celebrity’s illness as being the ultimate way to connect with media royalty. Syd (Caleb Landry Jones) March sells and extracts the most sought after infections, even the most popular ills belonging to Hannah (Sarah Gadon) Geist. He also secretly infects himself in order to steal the viruses, selling them on the black market. When he injects the disease that kills the adorned superstar, he becomes involved in conspiracies and mysteries far beyond is imagination.

Antiviral is the first full length feature from Brandon Cronenberg, son of David Cronenberg. And, much like his father’s work, this film delves deep into the themes of body horror – specifically illness and blood. In Brandon’s world, the populace obsessively feed on their celebrities blood, illnesses and bodies like vampires, lining up to contract the latest disease their favorite star has contracted or eat meat genetically engineered to resemble their DNA. Yet, Brandon does not settle on the inherited take on film alone, his vision is far more contrasting, black and white, pristine and corrupt. His film excels in composition. Cronenberg’s star, Caleb Landry Jones, exemplifies the design and approach to his film visual. Jones’ performance is calculated and understated; it’s his intent more than his actions that illustrates his story. The world of Antiviral is far too similar to the world around us and that is the most frightening thing about the film. 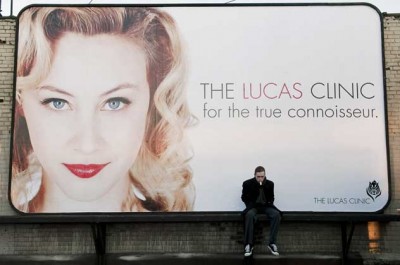 Brandon Cronenberg’s Antiviral is an incredibly thoughtful movie with a lot to say, not with its dialog as much as its visuals and commentary. The film explores society’s obsession with celebrity. It plays with humanity’s selfish and greedy nature, the darker side of need. It toys with mankind’s complacency with its own mortality, with disease and the value of life itself. It even has its fair share of conspiracy. But for all its ambitious goals, it settles on the subtlest of punctuation only rarely going for any kind of exclamation. For the most part this dire undercurrent fills the film with dread and disgust. But, regrettably, it also layers in an ample amount of sluggish pacing and meandering plot lines. Things take forever, the film’s progression festers much like the sickness Syd March infects himself with over and over. The script is a cancer that slowly takes over its world and the life of its protagonist. 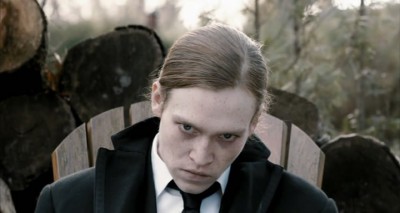 Caleb Landry Jones plays that protagonist, Syd March, the employee of the Lucas Clinic who carelessly steals the manufactured biological viruses by injecting the serums into his own bloodstream in order to sell them on the black market. He dances so close to his own mortality so often that very little excites him. He’s a machine and Jones plays Syd very cold, very still, very quiet. It’s a haunting and memorable performance, making the audience question his decisions, his psyche, his purpose. His body language is key, too; his head always tilted down, slight turned to one site. His dialog is extraordinarily monotone. He is not unlike a cancer himself. After seeing Jones in Antiviral, it is difficult to forget him. It’s a far cry above his roles in The Last Exorcism or X-men: First Class, and he is great in those films as well. But, nothing like this role. 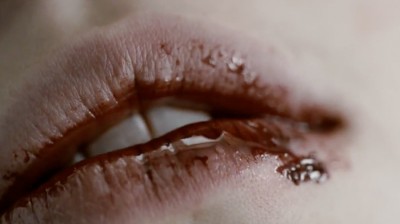 The effects in Antiviral call back to early films of Brandon’s elder, to many of his father’s films. The influence of David Cronenberg on his son is undeniable in the visual, visceral make-up of Antiviral, in an exciting and promising way. The affects of the viruses on Syd, Hannah and other characters is disturbing in its realism and implications. Shot against stark white backgrounds, the bright red blood is shocking and disturbing, with the film’s horror hidden just below its silky serous crimson surface. Syd’s hallucination mid-film, where his mouth transforms into a bleeding grate and his body is suspended by metal coils, is pure body horror originated by his father decades ago in films like Videodrome. Other scenes that explore a subplot about selling meat genetically manufactured from celebrity DNA is grotesque without being demented and vile. The hallucination aside, the effects in the film, no matter how far-fetched, are uncomfortably realistic and unsettling. 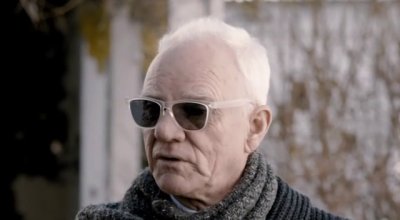 Brandon Cronenberg is a director to keep an eye on, a master of cinema in the making, full of promise and imagination. Antiviral may not be the film that puts him on the map for general audiences, but it displays a true artist behind the camera – one that is catching the eyes of most genres fans. His composition and eye for contrast is astounding and mesmerizing to watch. It is evident from the first frame of the film, as Antiviral opens on its star sitting in front of a bright white mural of marketing the Lucas Clinic and its brightest celebrity, Hannah Geist. The sterility of the “sell” is stark white, the harsh reality is dark, dingy and gray. The reality of it all is illuminated with bright red. The only thing notably missing is pacing and action. The film languishes in its message, overstaying its welcome in many scenes. 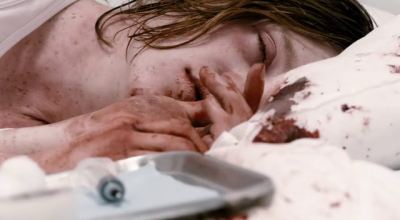 Antiviral is an interesting, thought-provoking film, but a slightly dull one. Intelligent and dramatic, the film is a visual treat but takes its time getting to its conclusion. It is well worth the investment, but may not be for every viewer – it is certainly not for the action-hungry, bing-bang-boom crowd. It is an acquired taste, no doubt. Its director, Brandon Cronenberg, and its star, Caleb Landry Jones, make an extraordinary impression – one not soon forgotten. The message is disturbing and terrifying on a cerebral level – obsession, greed, power and more. The film’s tone and pacing make it a challenge for most audiences, but the message and visual artistry of its director make is a rewarding film worth note. Antiviral is the perfect introduction to a bright new director.