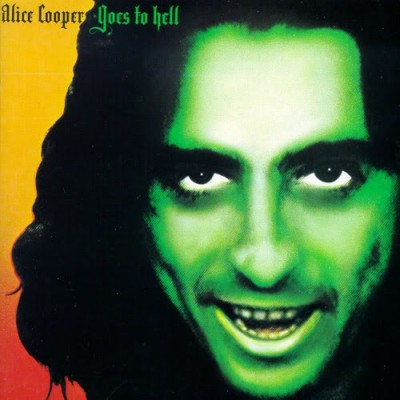 Released in 1976, this album was intended as a sequel follow up to “Welcome to My Nightmare”, taking on the idea of a theme album again. The release went gold with a few successful tunes coming off its debut. A planned tour though ended up being canceled due to Alice’s bout with anemia. The release featured producer Bob Ezrin providing his handy work to a more polished studio release for the Alice Cooper band. The tracks take all sorts of directions and tones always with a brooding, snappy Alice sporting out his trademark singing style. A highpoint release in Cooper’s career that delivered some of his most fascinating songs to date, Alice Cooper “Goes to Hell”

“I’m the Coolest”
Slow groove that often glamoured me to sleep with a low voiced Cooper singing in his bed room voice. Bluesy and “dare I say it” cool……..Sort of a parody from Cooper proclaiming his ultimate embodiment of coolness
Sun dancer, c’mon! (sun dancer?)

“Didn’t We Meet”
Another favorite track that begins in a sleep-calming tranquility breaking into a teeth-clenched Cooper rocking us to this perfectly catchy tune. Another alluding to his often reoccurring theme of dreams and night haunts. “Didn’t we Meet in the Night in my Sleep Somewhere?”

“I Never Cry”
Released in 1976, this song reached #12 in the US charts. Cooper’s biggest single to date that details his drinking problem at the time of this release. Cooper was reported to have entered rehab a year later
“Take Away My Eyes, Some times I’d rather be Blind”

“Give the Kid A Break”
A fun tune that comes across a bit much like a Rocky Horror Picture Show style song.

“Wake Me Gently”
A dreamy song, soft spoken and a bit more narrative than his other ballads. We get the sense at this point that Alice has entered into his dream world

“Wish You were Here”
Another favored track that received a fair shake of airplay. The strongest hard rock track next to “Goes to Hell” on the release. A perfect example of the 70’s sound at that time. It even managed to incorporate a gong and bongos…..
“I’m just a prisoner in time!!…”

“I’m Always Chasing Rainbows”
Bizarre for an Alice Cooper album, the song seems to be an epilogue to the concept album ending on the track “Going Home”

Overall one of Cooper’s best! The tracks (like many of his albums) seem to skip around from hard rock to showboat tunes depending on your mood. Some great takeaway tracks here that are meant to tell a story. When all is said and done, you walk away with 2 really strong cuts “Goes to Hell” and “I Never Cry”. The rest vary from fillers to catchy numbers.