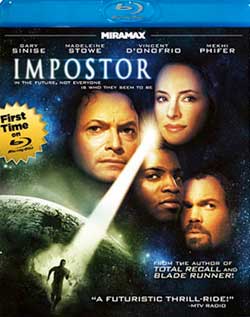 A top-secret government weapons designer is arrested by a clandestine government organization on suspicion of being a clone created by a hostile alien race wanting to take over Earth.

“Impostor” was the first of two films based on the work of Philip K. Dick that were released relatively close to each other (The other being Spielberg’s “Minority Report”). It takes place in the year 2079 and the Earth is locked in battle with an alien race known as the Centauri. Due to repeated airborne attacks from the aliens, cities are protected by large electromagnetic domes which block out the sky. But that hardly matters since the world outside the domes is nothing more than a wasteland…ruined by the numerous air raids from the Centauri. But the Centauri’s most diabolical weapon is their ability to clone humans and have the clones replace their human counterparts. These clones are all equipped with an explosive device in their ribcage that cause enormous amounts of damage & death when activated. 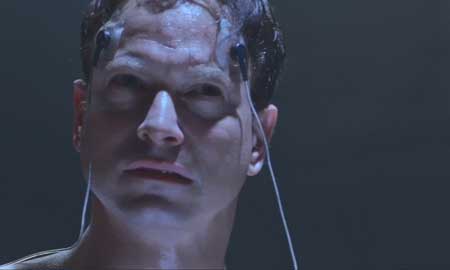 Gary Sinise plays Spencer Olham, who is a weapon designer & happily married to Maya (Madeline Stowe), a doctor. As Spencer is on his way to a meeting he finds himself accused of being a replicant by agent Hathaway (Vincent D’Onofrio) who intends to prove that Olham is a replicant who is on a mission to assassinate a chancellor (Lindsay Crouse) who is vital to the meeting by strapping him into a machine that essentially drills a hole in your chest to locate the bomb. Of course if you’re NOT a replicant then you die since the human body doesn’t take massive physical trauma such as a hole in your chest too well.

But as Spencer is being dragged to the machine he frees himself & manages to escape his captors. He finds himself outside of the dome where he meets Cale (Mekhi Phifer) a rebel who agrees to help Spencer get back into the city to determine if he is or isn’t a replicant. I found this plot device rather odd since Spencer got himself out of the city fairly easily, why the hell does he need someone to get him back in? Best I could figure is that the production needed a sympathetic African American character for the audience to relate to before he gets killed trying to help the nominal hero. Does that sound cynical to you guys? Well, it’s supposed to sound that way because movies like “Impostor” just push all the wrong buttons on my remote if ya get my meaning. 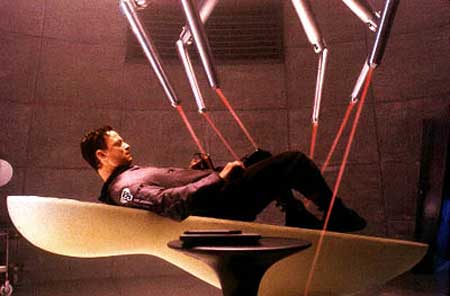 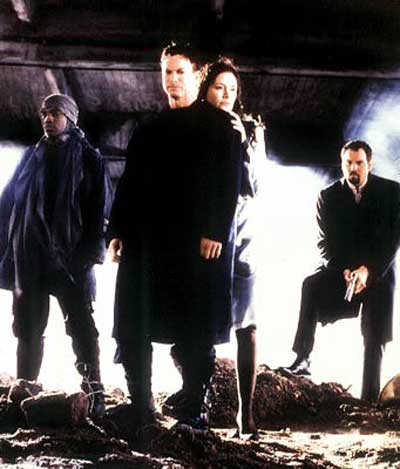 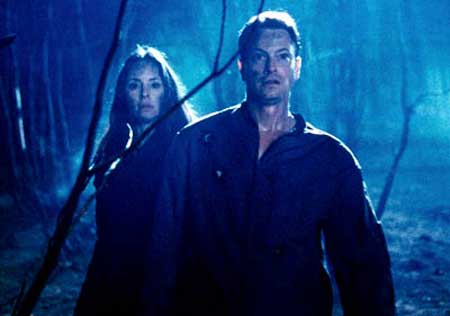 First of all through no fault of it’s own, “Impostor” just reeks of “Blade Runner“. Of course this is due to the source material which comes from the same author (Philip K. Dick) but the film doesn’t do enough to differentiate itself from Ridley Scott’s masterpiece. It’s basically “Blade Runner” lite and that just didn’t cut it for me. There are some pretty decent special effects here & the production design is sufficiently totalitarian but to these jaded eyes they were a whole lot of “Been there, Done that”.

I like Gary Sinise as an actor and he’s never failed to entertain me in anything I’ve seen him in but here I felt he was just going through the motions. Now this might be because we are supposed to be in doubt as to who (Or what) he actually is and if this is so then he does a good job. But somehow I don’t think this is the case. Again you can chalk that up to my being extremely jaded when it comes to movies like this one. You’ll have to make up your own minds in that regard. Madeline Stowe is gorgeous to look at and a good actress to boot but she’s barely in this film at all, unless you count seeing her on various monitors talking to her husband, that and the sex scene that takes place behind the opening credits of course. Her considerable talent is wasted here. Tony Shaloub plays Spencer’s friend Tony and he’s on screen just enough to establish that point before he’s gone. It’s basically a three person show we have here featuring agent Hathaway, Cale & Olham. The actors try mightily to keep us engaged in the middle of the movie but it does slow to a crawl and if not for agent Hathaway helpfully recounting the plot every so often I’d have been lost. 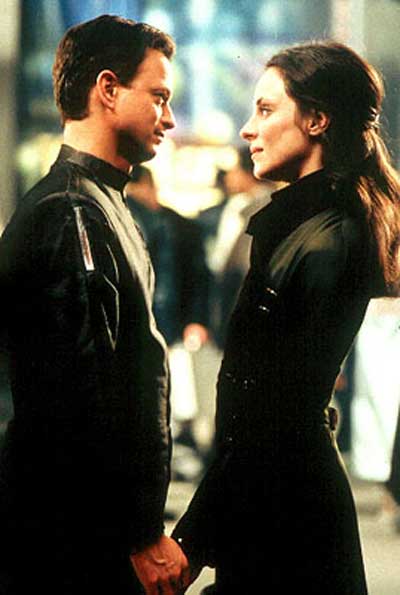 There is one thing “Impostor” has going for it and that’s it’s last fifteen minutes where the plot twists…and then twists again before it all goes BOOM! I thought I had it all figured out (And to a point I did..thank you very much) but then they flipped the script on me and surprised the hell out of me. That dear acolytes, does not happen very often but it happened here. It’s such a good ending that it left me thinking “If they attached the last fifteen minutes to the first fifteen minutes this would be a great short film” when voila! I did some research and found out that this was indeed a short film expanded to feature length after the producers loved what they saw. Big mistake producer guys (The Weinstein brothers)! You guys should’ve left well enough alone. This ended up being a kick ass short expanded into a blah feature film. So sad & unnecessary. 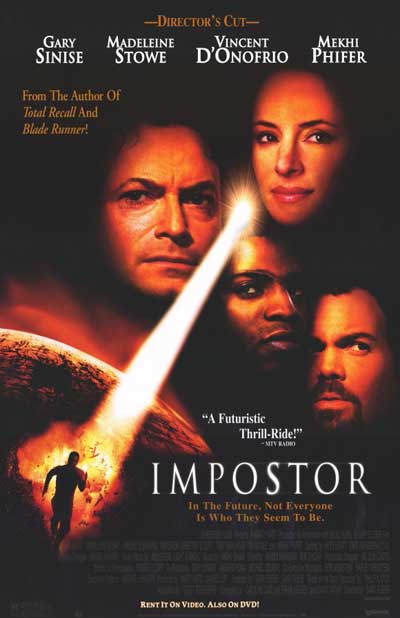 The Black Saint rates “Impostor” a two out of five shrouds overall. It has a nice (If dated) look to it, good actors doing the best they can do with a sub par script & director Gary Fleder does a workmanlike job trying to bring it all together. If the rest of it was equal to those last fifteen minutes though….

Imposter is now available on Bluray per Echo Bridge Entertainment