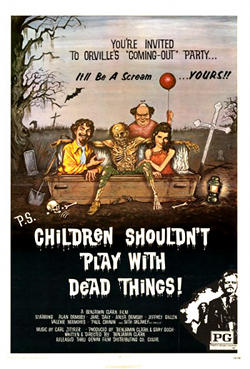 The remake of CHILDREN SHOULDN’T PLAY WITH DEAD THINGS has been rumored for years. Tom Savini’s name has been attached to that rumor since day one. Originally George Romero was slated to direct and Tom was to once again to team up with his longtime partner again handling effect duties.

After a long pause of absolutely no information on the project this morning brings the major announcement that FANGORIA and ANCHOR BAY will be joining forces to make the remake happen and Tom Savini will be handling the directors chores.

Fangoria Entertainment is partnering with veteran producer Steve Stabler and Anchor Bay Films to produce a startling and humorous new version of director Bob Clark’s seminal 1972 zombie classic CHILDREN SHOULDN’T PLAY WITH DEAD THINGS. The remake, to be shot later this year, will be directed by horror hall of famer and zombie makeup master Tom Savini.

In the article Savini has the following to say about his involvement:

“CHILDREN SHOULDN’T PLAY WITH DEAD THINGS means something special in my life,” says Savini, who won acclaim last summer for his WET DREAMS segment of the festival hit THE THEATRE BIZARRE. “When I did my first movie, it was for Bob Clark and [original CHILDREN star/special makeup creator] Alan Ormsby. It was DEATHDREAM, the very next movie they did after CHILDREN. One of the scenes involved a drive-in movie theater, and we shot all night, and on the screen CHILDREN played over and over again! That was the first time I saw CHILDREN. I watched it repeatedly while I assisted Alan on DEATHDREAM’s special makeup effects.”

As far as holding true to the original film:

The new film will follow the basics of Clark’s original film, in which a group of low-budget filmmakers unwittingly awaken an army of the long-deceased during an occult ritual on a remote island. “We hope to pay homage to the original, and excite and stimulate the audience that liked it,” says Stabler, who has produced over 60 popular movies, including DUMB AND DUMBER, KINGPIN and BEHIND ENEMY LINES as well as the horror features BATS, PUMPKINHEAD II and GREY KNIGHT/GHOST BRIGADE. “We also hope to attract a new audience that will enjoy and appreciate the current take on it.”
No word on when production will gear up but it should be soon. Keep it here for in depth coverage on this exciting project.