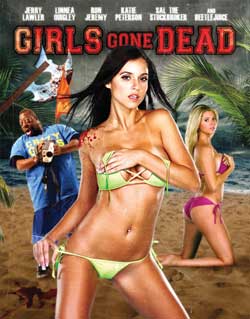 When Rebecca (Katie Petersen) plans to get away from it all (mostly her fanatical religious household) and reunite with her high school cheerleader friends on spring break, it seems her mother does everything in her over protective power to thwart the impromptu vacation. Arriving on her friend’s beachside estate, the girls soon realize that the community of Manatee Creek is lame with a capital L they decide to take the party on down the road to Daytona Beach. A shoot is in midst for the ravenously popular Crazy Girls Unlimited video series celebrating inebriated college coeds willing to flash their anatomical gifts for a slice against their fifteen minutes of fame. The party escalates as does the body count. It seems someone doesn’t appreciate the female form quite the same as our Crazy Girls Unlimited crew. Will Rebecca and company get to cut loose in the best way they know how or will they succumb to the prowess of Girls Gone Dead?

“Just when you thought it was safe to go topless.”

Girls Gone Dead can be best summed up as a cavalcade of all that is deliriously gratuitous in cinematic grandiose. One may argue this is a negative thing, but rest assured this spectacle is conveyed so unapologetically audiences cannot help but feel a certain affection of the avant-garde of numerous sub-texts of societal fixation. While appealing mostly to a male demographic of eighteen to thirty nine or an audience that would inevitably subscribe to Maxim magazine there is a little something for everyone here.

If you’re expecting to be bedazzled with sophisticated plot twists and articulate character development, chances are you’ve selected the wrong film. At the same time GGD flawlessly roasts such genres as the tired, old teen slasher flicks ever so popular in the late seventies, eighties and reprised for another run in at the turn of the century. It takes a stab at the fixation of conceptual ‘reality’ programming such as the breast compulsions of Girls Gone Wild DVD series that plagued our infomercial channels in the wee hours of the morning for years and years. One particular scene that stands out in typical gut busting fashion is the degree of desensitized observation as the youths clamber around a picnic table to watch a social media expose of a beheading taking place at the very party they’d attended mere hours ago. The clan laughs it off in oblivious fashion before retrieving another beer and resuming their debaucherous shenanigans. 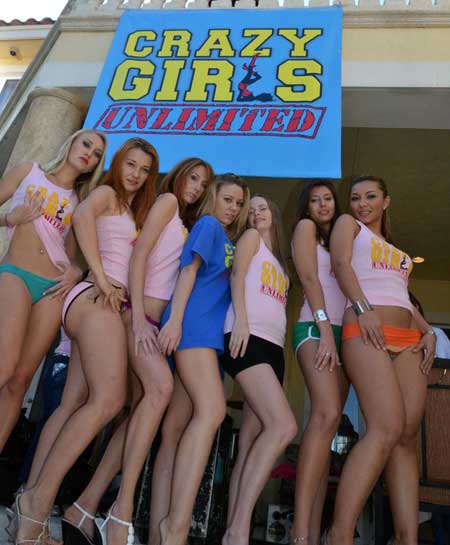 The cinematography is crisp, clear and radiates all that is glorious in high definition. Each of the scenes are executed so flawlessly it’s easy to take for granted how difficult a shoot like this most have been with such a large cast. Special recognition should be made to the footage involving the Crazy Girls Unlimited to provide the façade of amateur filming in shaky first person persona then cutting back to the slick, visual spectacle of the present. Much of the villain or antagonist shots are presented in first person as well as we get a glimpse into the mind of a crazed serial killer or at very least their perception in the moment.

The costume and set design works in spades. One cannot help but sit up and notice the captivating physiques of the bikini models as each sheds their itsy bitsy’s in varying degrees of reluctance. Whether you’re an A cup aficionado, salivate for silicone or a D cup diehard there’s plenty of celebration in the female form. It takes consistent shots at all the irrelevant nudity in previous slasher fan-fare yet somehow comfortably resides here with purpose. A noteworthy scene is the opening sequence involving Rebecca in the church of the condemning and damned. A sermon is in progress judging all before the minister with impure thoughts and lust for the flesh. The visual resonates as we’re reminded of our own personal woes with religious fanaticism.

The props and costume for the killer are innovative, refreshing and haven’t been explored an awful lot as of recent productions. The war hammer is effective and unsettling yet capable of becoming the next iconic weapon of mass destruction comparable to Jason’s machete or Leather face’s chainsaw. I can foresee WalMart’s and KMarts ravenously stocking their shelves with Halloween costumes this year.

Music is for the most part is catchy and alluring to just about every click imaginable for this audience. There’s some surfer post punk riffs, a little dose of hip hop and even a cameo by iconic rock drummer Nicko McBrain of Iron Maiden. Ironically Nicko plays a country singer. A scene rolls in the closing credits that are guaranteed for a laugh or two. Some of the sound effects are depicted well such as the killer’s heavy breathing in stalk scenes or the wet, squishy sounds well the camera lens is painted red. These staples are essential for creepy decked out terror.

The special effects are engaging and enhance the believability factor. Blood and gore volume closely rivals that of our boobalicious vixens and borderlines the level of over the top silliness that in all likelihood lead us to this selection to begin with. There’s some classic dialogue in the climax from one Jerry Lawler you’ll undeniably recognize as the color commentator of WWE Monday Night Raw fame. Never shy of knee slapping quips the king declares and proclaims time and again.

Girls Gone Dead is a viable commodity for letting loose, escaping and leaving behind the mundane woes that trouble us from day to day. It’s a good time had by one and all with laughs, chills and even the odd bout of titillation. After all, isn’t that all a good horror is supposed to be?

Four out of five tombstones 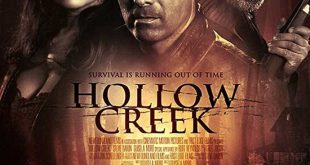 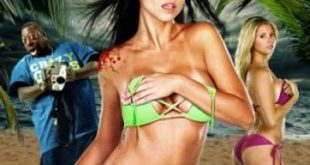