Home | Music Review: Alice Cooper – From the Inside

Music Review: Alice Cooper – From the Inside 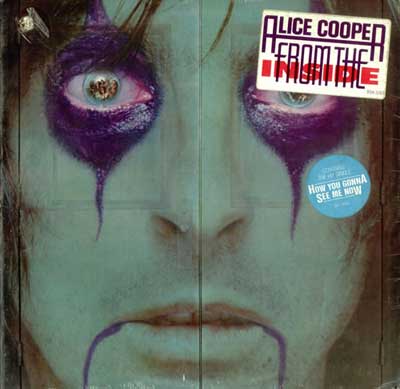 Alice Cooper’s release titled “From the Inside” stands as one of my favorite release from the Cooper camp. This particular theme-centered release depicts Alice’s life as he imagined it during his alcoholism stay at the New York sanitarium . The release also managed to earn him a billboard hit with the love ballad “How You Gonna See Me Now”. The album later was realized in the form of a Marvel comic single 1 off simply titled “Alice Cooper. The “Marvel premier” issue was noted as being the first comic book appearance for Alice. I found myself often sitting with the album while following its story within the pages. Alice Cooper’s 11th release.

“From the Inside”
Parades forward with its almost spoken lyrics confessing a bit of Alice’s on the road antics and drinking binges. Perhaps one his more sanitarium inspired tracks. Alice proclaims..”where is my makeup , where’s my face..on the inside” A track that I’ve always thought Eddie and Cruisers borrowed his sound from (aka “A Season in Hell” track)

“The Quiet Room”
An ode to seclusion and Alice’s journey in dealing with his solitude. A great track that acts a ballad with a darker edge lyrically. A perfect song for getting into Alice’s head and feeling his pains of being locked up.

“Nurse Rosetta”
A “sexy strut” of a tune. I often imagine Alice rolling in swinging a gargoyle cane about as Rosetta prepares his daily dose of emotion depressor. Great singing tone on this one complete with a bit of that nasty Alice snarl to make it one of the more effective from this release.

“Millie and Billie”
Somehow in this innocently sung duet, you can gather a rather creepy feeling from this unlikely inclusion that has Cooper performing a duet with singer Marcy Levy. This song always painted a cool picture of a couple dating within an asylum that otherwise should be locked away forever, mentally unstable and lethal to all. While a softer inclusion than others, its musical bridges eerily creep up on you with orchestral tension. The asylum would be complete without this track.

“Serious”
My hands down favorite from this album and one of my favorite Alice Cooper tracks of all time. This track just moves, rocks, and hits you in the head. It also seems perfect for driving really fast down a long abandoned road (well that’s the sense I got any ways) Alice proclaims..his strongest statement to date “All of my life was a laugh and joke, I drink I smoke…and then I passed out on the floor” …..perhaps a self confession of his drunken exploits dangerous of ending his career and health for that matter.

“How You Gonna See Me Now”
One of Cooper’s most successful songs to date. A great “please take me back cuz I screwed up – song” This power ballad trend would be a staple for many of his most successful singles.

“For Veronica’s Sake”
I’m told this song was supposed to be about his snake, though for context we can envision Alice trying to escape the walls of his confinement to reunite with his girlfriend. Kind of ties in nicely as a segue from the “How You Gonna See Me Now” track

“Jackknife Johnny”
More specific to one of Alice’s encounters within the walls of crazy. Jackknife Johnny, A VC VET that also didn’t quite make it out with his sanity in check. A great addition to the Millie and Billie couples song.

“Inmates (We’re All Crazy)”
Another hands down fav from this album, A great closer uniting all the inmates into a powerful chant of empowerment. “The lunatic fringe” “roller coaster brains”….
Great use of child-like voices combined with the power of a group united….”it’s not like we’re vicious or gone”
compelling, silly and highly original

What is unique for this particular release was the impressive cast of musicians who provided the backing for the various tracks. With many of the names coming from the older rock veterans collective, one might notice the presence of 3 former Elton John rockers. In my opinion this was the “true” Alice album that seemed to get lost in future release for several years never really reclaiming his original sound (Alice was prone to genre and trend changes). A strong release and perfect example of a rock album concept creation. Alice Cooper truly embraced his insanity with a personal relation that is nothing short of inspiring.

Music Review: Alice Cooper – From the Inside

Tags Alice Cooper From the Inside