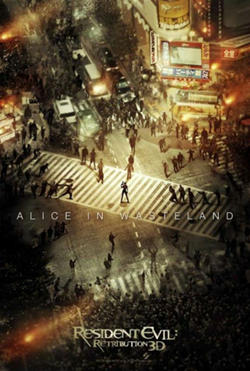 Overlooked this one somehow, it has apparently been available for a few weeks but better late than never right?

All you ALICE fans out there are gonna love this if you haven’t seen it yet. Sony released the 2nd trailer for this falls RESIDENT EVIL: RETRIBUTION and I’m kind of mixed on it.

The first part is pretty kick ass. I like the whole “retro – Alice at home with hubby and kid” thing. I even like when the doorbell rings and zombie beast shows up but then it seems to head right back into what we have come to expect from this franchise, slow motion action shots and Alice flipping around killing zombie’s with her big ass sword.

Don’t know about you but I’m kind of done with that!

This one does look like a reunion flick though as the trailer seems to imply that just about everyone who has had a role in the series will be making an appearance so that could be cool. Maybe we’ll get to watch them flip around in slow motion and kill zombies! Just shoot me know please, before I waste the 12 bucks.

Sorry, don’t mean to sound so down on this one. I was excited when I watched the first 60 seconds on this trailer thinking “excellent, they are actually going to try something a little different and explore an interesting twist.” Yeah, guess not.

We’ll have to wait and see though. September brings this one to the masses and in 3D to boot.

Give the trailer a look and see what you think.