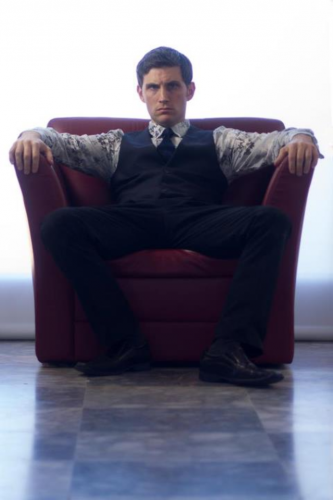 How does Creep Creepersin’s Dracula stand apart from other Dracula movies?

It stands apart a lot of ways I think. The thing I think people will notice first, is how bright it is. There is light blasting everywhere to the point where it’s almost blown out. It is extremely modern to the point where it might even be outdated by the time of its release (laughs).

Instead of Dracula being the king of his domain like in most films, our Dracula is more a prisoner to his curse than anything else. There is a very heavy social commentary underlining this film that any artist would relate to right away. It’s sad. It has many moments of dark humor mainly through Peter Stickles and Bruce Hart, but it also is extremely tragic. I told the cast, to watch Martin and Harold and Maude before coming to set. If you have seen my Frankenstein film, seeing my Dracula will seem in the canon of my twist on the classic tales.

How long did it take to film?

We have shot 4 days and have one more.

Where (what locations) was the film shot?

The entire film was shot in Malibu California, in this beautiful giant mansion in
the canyon.

What was the hardest challenge making Dracula?

Honestly, as stupid as this sounds, scheduling. Getting all the cast there at the same time. Everyone is this works a lot and I’m blessed that everyone wanted to do it. I got pretty much my first pick on cast all across the board. Even Jonny Camp playing The Crawler, I wanted him and we had a conflict then those scenes got pushed and we ended up being able to use him after all. But everyone, Peter, Bruce, Elissa Dowling, Elina Madison, Domiziano, Dawna, Tara, Lisa, Ming, Will, everyone. It’s a great cast.

Out of all the actor’s who played Dracula , which one inspired you the most?

That’s a really though question. Bela Lugosi formed a lot of my childhood, Max Shrek, even though not Dracula per say, was and still is the most frightening. But then how could you not like Gary Oldman? There have been many great actors ton don the role. I think Peter did a fantastic job and he is in amazing company. I really hope that people will throw his name around now when talking about great actors that played the role. He was fantastic.

What was your favorite scene to shoot?

That is SO hard! There were so many great ones! There is draculas melt down. There is quite a few beautiful scenes where things are going on far away in the background
while we are focused on the foreground and vice versa. The composition on this film is definitely one of the best I’ve done. A lot of that credit goes to Jeff Gaylan
our DP. But on acting, any time Peter and Bruce are in a scene together it’s gold. There is one in particular with Peter, Bruce, Elissa and Lisa Margaroli which is
just classic comedy that harkens back to Abbot and Costello Meet Frankenstein but also has a fun Twin Peaks / David Lynch suspense to it.

Do you have any interesting or funny behind the camera stories?

Well the whole movie was fueled by Krispy Kreme donuts and coffee bean so that was
kind of crazy the one day when It got there late i couldnt get anyone to do anything! We had to stop shooting all the time because coffee cups kept creeping into shots in the weirdest places. That should be a fun drinking game while watching Dracula, to find the random coffee cups.

The first day we did any of the blood gags was funny because we couldn’t get the rig to work, and everyone, cast and crew both were jumping in all that the same time trying to fix it. I think the stuff we were shooting was so heavy, everyone was just like, “bloods here! Let’s have some fun!” I ended up walking outside because I couldn’t handle everyone jumping in trying to get this stupid tube to run blood. It was ridiculous. But it was a lot of fun. Another time, I was behind a couch making this giant pool of blood on the floor and I was so happy that it was working good and looking cool. Then I noticed that I could see the cameras reflection in the pool of blood and I said, “jeff, am I in the shot?” and he said, “sure are.” and for some reason, I didn’t move. I thought that if I stayed completely still, the camera wouldn’t see me, like a raptor in Jurassic Park or
something. Then jeff said, “creep, I can still see you with that giant grin, you have to actually move back away.” I felt like a douche.

Where will HNN readers be able to see Dracula?

What would you want fans to say after watching your Dracula?

Awesome is always the goal. But I also want people to be surprised with what they saw. This isn’t anything anyone has seen before. It’s not what they think it is and it would be great if people could find characters that they can really relate to in this. Every characters yin and yang hang out playfully here, just like in real life. Every great person is an asshole to someone and every villain has someone that loves them unconditionally. I just want people to be glad they saw it and to recommend it to others without giving spoilers out.

What other films are you currently working on?

Awesome Girl Gang Street Fighter and Alien Babes in Heat are in post right now, and over the next few weeks I’m doing, Paranormal Ghost Hunters: Bam the Ghost which is a horror/comedy/mockumentrey. Then the Exploitation horror film Gritty and then off to the Slasher comedy Fork You. Then I’ll take a couple weeks off and get back to
it. I have a very busy summer and fall.