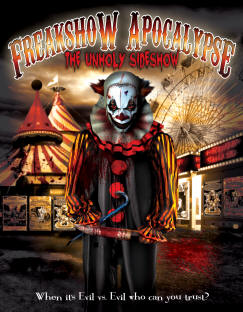 Witness the beginning of this action filled saga where evil battles evil while the fate of mankind lies in the hands of the twisted and deranged. If the ritual is not set in motion, and the Unholy Sideshow is not up to the task, the gates of the abyss will cover the earth in darkness. In a world of fire breathing vampires, modified killers and an onslaught of zombies, no one is safe. When it’s evil vs. evil who can you trust?

It isn’t very often where my first reaction to a film I’m watching is “WTF?” Then when the film is over I’m still having that same reaction. Such was the case when watching the Chemical Burn release “Freakshow Apocalypse”. I had no idea what was going on 90% of the time. The 10% I did grasp was written on title cards that are flashed throughout the film. The story is a muddled mess that is to be told in four parts. This film is only the first two parts so we aren’t even getting the full story (if there is actually a story, not quite sure yet). I will say that the film held my attention for some unknown reason. I was intrigued by the fact that one of the films’ stars was The Enigma whom some of you may know as a founding member of the Jim Rose Circus Sideshow as well as appearing on “The X-Files” (episode “Humbug”). He doesn’t help anything make much sense but I guess it was kind of cool.

So, there is this secret society that was founded in ancient Sumeria known as “The Order of Mystery”. Through ritualistic magic they have been extending their lives. Because of their Necromantic practices they have been opening doors into the realms of the dead. To preserve humanity, the Masters of the Order developed a ritual sacrifice to hold back the Armies of the Abyss.

Does any of that make much sense to you? I guess I get it, though you couldn’t really tell that was the story when watching it. We mostly see these sideshow performers doing their tricks. I will have to admit that I didn’t mind watching that. Sideshow performers are entertaining to me, they are artists. That doesn’t mean that they are filmmakers though. This film is proof that they should stick to doing what they do best and leave the filmmaking to more trained individuals. What they have accomplished with this film pretty much just adds up to being one huge mess. The script is almost non-existent, sloppily edited, horrible acting, lack of creativity, need I go on? You would think that if a group of sideshow performers were to make a horror film it would be much better than this. 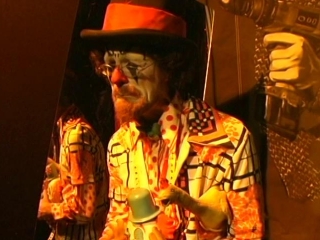 Early on in the film when the sideshow performers are performing, I was kind of enjoying it. Shortly after that people start getting tortured and murdered which could have been cool if the effects were executed with some sort of flair, sadly I have seen better make-up on a drunk jock at a Halloween party. Most of the camera work looks more like a home video and the lighting never does what it’s supposed to. And the only thing that is frightening about this film is the fact that it is only the first two parts and there is more to come. I wish I could talk more about story concerns but the story is just so convoluted that nothing I say would make it any easier to understand. The only thing I kind of grasped was that there was two dueling sideshow groups, trying to beat each other out for the coming of whatever it is, they are waiting for.

There is no way I can just come out and recommend “Freakshow Apocalypse”. This film is one of the biggest train wrecks I have ever viewed. With that being said, there is also something really bizarre about the film. Even though NOTHING makes any sense at all, the strangeness of it all had my eyes glued to the screen. I almost even want to see the final two parts, not because of the story, just to see the freakshow. If that makes any sense at all then I will recommend watching this to you. If not, then “Freakshow Apocalypse” is only getting *1/2 (out of 5) from me. And that is being generous. 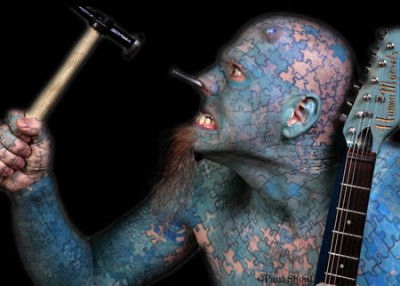