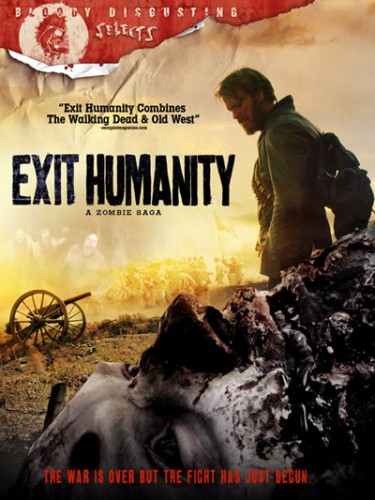 Returning home after surviving the horrors of the American Civil War, Edward Young (Mark Gibson) enjoys only the briefest amount of happiness with his family before tragedy strikes. His farmland is overtaken by a swarm of the living dead costing him his wife and child. As he hunts for his missing son, Edward discovers the flesh eaters are his neighbors and nearby townsfolk. As the days past, Edward struggles with his own sanity, his fate and the future of mankind as he begins his personal journey encountering new found friends and a power crazed madman, General Williams (Bill Moseley).

Writer/Director John Geddes executes an intimate approach to his debut feature film, Exit Humanity. By separating the film into chapters and using narration to reveal the lead character’s thoughts and motivations, Exit Humanity provide an introspective diary approach to the zombie genre. The film feels very much like a graphic novel brought to life, a more personal, focused alternative to The Walking Dead. Where the film succeeds as a character study of the protagonist, it suffers as a zombie flick. The pacing is off and for much of the first half, the narration (provided by Brian Cox) is far more interesting than the visuals on screen where the dialog is thin and the action is nearly non-existent. The movie picks up during its final act providing an inventive and captivating conclusion but it may be too little too late for many viewers. It could also use a bit more imagination in its reanimated cast as well; from time to time, an interesting zombie will appear, but for the most part, the ghouls are generic and dull. Exit Humanity is admirable in the passion and vision that went into the writing and direction but lacks the visual synergy to elevate it above the vast amount of zombie films on the market.

Exit Humanity divides its story into a series of chapters with each section broken up by a brief animated sequence. This techniques works both ways for the film, giving it a unique flavor in the beginning but taking the audience out of the film toward the end. There is nothing subtle about it and it wasn’t intended to be. Many films use similar blocking in a film where a title card will delineate a new direction, a new location or emphasize the date and time of the next stretch of film. Paranormal Activity uses this to hammer home “day 12” and Fringe creatively inserts location titles in its establishing shots. Here, the chapters bring an extended break from the narrative to introduce progression in the plot and new characters. The idea is inventive and creative and is put to great use; however, the effect, after the second or third chapter, disrupts the flow of the narrative causing the film’s pacing and visual technique to fight for attention. Perhaps if the film contained a quicker pace with more urgency and unease, the chapters would provide a needed break, a resting stop for the weary; however, with the slow, deliberate plodding of the story, the chapters bring the movie to a halt instead. Still, the idea is imaginative and interesting and gives the film a unique quality that is worth noting.

For the better part of the first half of the film, there is very little dialog, with Edward Young screaming in agony or despair more than having anything meaningful to say. Instead, the director uses voice over narration to express the character’s thoughts and motivations. The talented Brian Cox steps in to provide the narration and he brings a powerfully expressive voice and emotion to the film as a more mature version of Edward. Combined with the film’s strong diary approach, it immediate feels like an aged version of the character relating evens from his past. This imposes a number of effects on the film. For one, it brings a strong intimate ambiance to the story, a personal recounting of the events shared passionately with the audience. It also lets you know the protagonist is going to survive to tell the tale which undermines some key scenes where Edward Young’s life is threatened, either by zombies, General Williams or himself. Many times the narration is far more interesting than the visuals on screen, which causes the sluggish pace to crawl even slower. Later in the film, after more characters are introduced and a more natural dialog exchange is permitted, the balance between the film and the narration is stronger and the film become more engaging.

Mark Gibson stars as Edward Young and is a good “younger” version of Brian Cox’s narration. His voice and Cox’s voice mesh well. Gibson handles the material well as he pantomimes his way through the beginning and later interacts with the other cast. He brings the right amount of intensity the role, a driven focus. He’s an interesting protagonist. The rest of cast fares equally as well with each of the main supporting characters well cast. Dee Wallace (E.T., Cujo, The Howling) appears as Eve, a fortune teller who is suspect of being a witch and may hold the keys to surviving the apocalypse. It’s a smaller supporting role, but an important one that her talent and familiar face elevate the role quite a bit. Stephen McHattie (Pontypool, Watchmen, The Tall Man) is a medic, serving under General Williams’ forces, but is given precious little to do missing out on much of the character and charisma the actor could potentially bring to the film. A great deal of energy is brought to Exit Humanity with the casting of genre favorite Bill Moseley as the evil, misguided General Williams. Where every other role is rather subdued and understated, Moseley still manages to instill much of his manic behavior to the role bringing a start contrast to the film. His General Williams stands out even when his character is standing completely still for a photograph. Even then, his energy is bouncing around him making his slightest expression a magnitude of madness. Having Moseley appear about the midway mark is a welcome relief and a clear sign things are going to liven up – which, of course, they most certainly do.

Exit Humanity is a zombie film where the zombies are little more than set decoration. Taking its cue from the popular The Walking Dead comic and AMC television series, the film focuses on the characters instead of the zombies. However, where The Walking Dead manages to provide their zombies with character and menace, Exit Humanity’s zombies come across bland and run-of-the-mill. For a zombie film, it surprisingly lacks an ample enough amount of flesh eating monsters. Still this is a very mature deliberate approach to zombies without totally abandoning the zombie along the way and not enough can be said for that. The film also uses the zombies in an original manner during the final act that is inventive. It is during the conclusion that the zombies become more than just a random threat along the protagonist’s long journey. It’s hard to say Exit Humanity requires more zombies to be more successful because that’s not the point of the story; however, even the zombies that do populate the film need more to them to provide the danger, the urgency, the doom that the characters in the film with the zombies are trying to express.

An ambitious and imaginative zombie film set during the American Civil War, Exit Humanity takes an intimate look at its hero’s journey. The film contains a strong passion for the story and a great cast but a dreadful pace. The film plods along slower than the slowest Romero zombie. However, for those who stick with the film, the film’s final act is inventive and rewarding providing a satisfying conclusion. Brian Cox’s narration and Bill Moseley’s wonderfully over-the-top performance are highlights of the film. High in drama and slight in horror, the film is more about the emotional toll of the zombie apocalypse than the machinations of that apocalypse. Zombies be damned, the people are more important. If that doesn’t bother you and a drawn out examination of one man’s handling of the horror that surrounds him is enough to titillate and satisfy your cinematic taste-buds, then Exit Humanity delivers; however, if you crave zombie action and flesh eating mayhem, this film will come across horribly sluggish. Director John Geddes has a unique vision and clear passion for film giving the film a signature quality that promises many great things from the filmmaker.