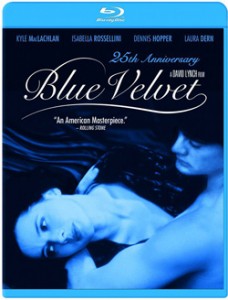 Jeffrey Beaumont is an honest young all American man. On an afternoon stroll he finds a human ear in a field near his home. His curiosities lead him to a twisted and wildly freakish syndicate of characters existing in his quiet picturesque little town, forever changing the way he views reality.

David Lynch is a creator of the pure aberrant. His films can neither be classified as dramas, thrillers, or to be truthful any other genre.
He simply does not think anywhere inside the box as a director or standard human being does. If you never had the chance to view any of his films stop what you are watching…now, and get your hands on Blue Velvet. We are talking about initiation into a completely unique vision on film.

Blue Velvet opens vividly on small town America. The white picket fences, flowers and blue skies burn bright with a syrupy quality that guarantees an apple pie ala mode life. Open your eyes and examine what you are watching. Artistic visual expressions of what will be going on in the film are placed right in front of you. A pinched and leaking garden hose mirroring the fragility of a human body. The voracious festering black beetles just below the surface of the watercolor town. Contrast and mirror image is a constant theme. The queasy marriage of normalcy and the dark side of the human mind. It is like taking two foods that seem impossible to be combined in good taste, and finding out that there is harmony. 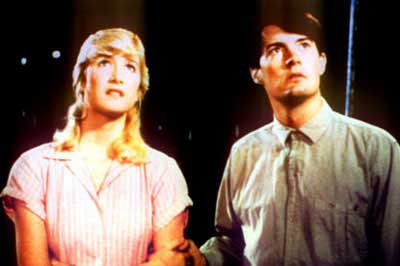 The character of Jeffrey Beaumont is quite virgin in the beginning of Blue Velvet. He is clearly on a straight path, intelligent and soft spoken. The model respectful American young man. He clearly yearns for more than the same hum drum but seemingly fits where he is in Lumberton. Kyle Maclachlan has always been a strange actor to me. It is very hard not to associate him with this role. He is genuine and transforms quite drastically during the progression of the movie. Something that just cannot be simple to do. The viewer watches Jeffrey Beaumont darken and warp throughout the film. Steadily his perception of life and morality undergo metamorphosis. Many times this happens to nightmarish and confusing proportions. 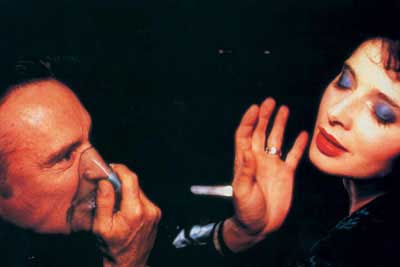 Isabella Rosellini plays the role of Dorothy Vallens. A queer and damaged lounge singer who is the focus of mystery behind the story. These roles are so bizarre. The character is fragile and frightening. Vallens isn’t threatening except for one very taught scene in the beginning of the movie. She is certainly frightening in the sense that she portrays what a human can turn into if broken. Always quivering and manic, this role must have been very challenging. I can’t really think of who would have spun the same whirlwind of emotions with creepy flakiness the way she did. The end result is seemingly perfect and I feel I understand why she was chosen. Her distress seems so real. She is involved in so many disturbing and stone cold scenes, you start to wonder what to do when sex is combined with creep and abnormality.

I am such a fan of noir and noir stylized effects. I love when character Sandy Williams emerges for the first time so slowly from complete darkness to a soft light on the sidewalk. The music creates extra quirk for the film. It is well threaded and adds suspicion to the mystery. I am of referring to the sounds that have nothing to do with the Bobby Vinton song or my favorite Roy Orbison. The non focal characters of the town start to give off that weird Leave it to Beaver creepiness. Eventually you start to feel that the abnormal becomes normal and the seemingly normal becomes abnormal. It is so interesting to experience that in a movie. You may become addicted. 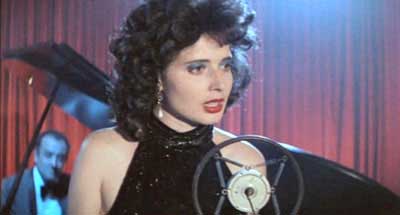 Dennis Hopper. What can I say here. Yes the character of Frank Boothe will surely stay with you after you see Blue Velvet. A whacked out maniacal helium huffing freak. Scenes with Frank Boothe will cause you to question what exactly you got into here? I assure you red lipstick will never seem the same again. You will understand completely. If you want wildly disturbing out of control antics, then I assure you follow the yellow brick road straight through Dennis Hoppers performance. If you have the ability to laugh at very dark performances this will be even far more rewarding for you. One of the scenes that is a gem is where a trip is made to Ben’s house. Dean Stockwell plays the ultra flamboyant and ‘suave’ Ben, a strange character with a scene so memorable it very much has become a standard of weirdness in all time film history. What a crew of creatures in that house. 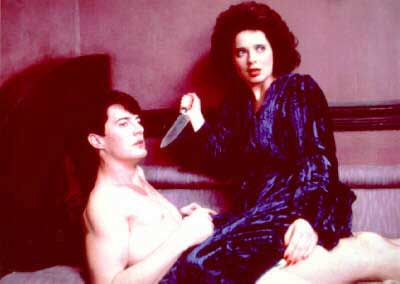 Blue Velvet is a complex film. Symbolic and kinky. Weirdness is ripe here. It is mysterious and alluring. Lynch does this filmaking so naturally. Some people just won’t get his work. You know what, I understand that to a point. There are the cookie cutter humans, and there are the kooks. There are the eccentrics and the up tights. Always remember we all have it within us as human beings. David Lynch has ways of showing us we can be pretty ugly at times, probably better than most directors. He also shows beauty, but Blue Velvet makes you understand one cannot exist without the other. 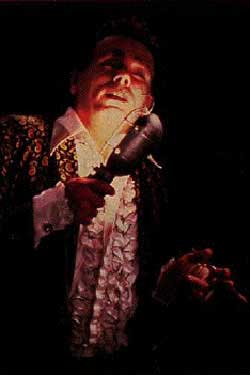