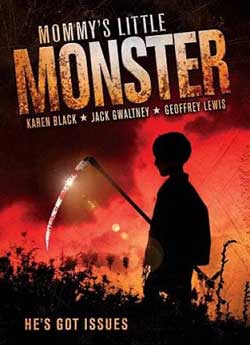 A Light in the Darkness concerns Taylor Melnick (Matt Terzian), a former mental patient who is discharged after four years in a sanitarium. He returns to his hometown and runs head-first into his own psychoses, then decides to seek violent revenge against the town for the treatment he received, axe-in-hand. Geoffrey Lewis, Troy Beyer and the legendary Karen Black co-star

There are certain actors that can be frequently seen in the horror genre that even in bad movies are a draw and will warrant a viewing. Tony Todd, Udo Keir and Kane Hodder are some of my favorites but in this case we have the iconic Karen Black. With their, if you’ll allow me, star power I usually suffer from being too forgiving of a movie and will even watch something I may have passed on a first time around.

In “Mommy’s Little Monster” Karen black plays, well, the other title character and I for one was excited to see her in what may be her pseudo “Mommy Dearest” glory.Taylor Melnick is being let out of a mental institution that he voluntarily committed himself to despite not feeling ready to face reality. He moves back into his home that was left in the poor care of his gambling addicted uncle who’s played by that-guy-actor Geoffrey Lewis (“The Lawnmower Man”, “The Devil’s Rejects”.) As Taylor settles into his old house with his obsessive compulsive tendencies and visions of his detrimentally abusive mother played by Karen Black (“Some Guy Who Kills People” /, “House of 1000 Corpses”) he starts to work with his uncle on an archeological dig to find a Native American burial site. Luckily enough Taylor has several archeological degrees that he was apparently sane enough to acquire before committing himself as his schooling goes unaddressed. 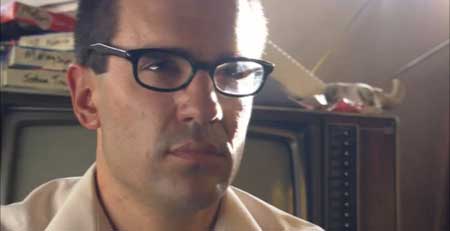 He soon meets Kira, his drunken neighbor, who quickly ingratiates herself into his life and becomes the closest thing to a love interest in the story. Kira searches for a connection with Taylor as she fights her demons, being estranged from her husband and child as well as the loss of her dreams, with excessive drinking. As the most interesting character it’s easy to feel bad for her as Taylor shows her little respect or attention and merely tolerates her presence while he fights with his own demons.

Taylor and Stanley (his uncle) are being pressured by the development company that owns the land they are digging on and it becomes clear that it has to do with Stanley’s gambling debts. As Taylor searches for the burial site he begins having visions and nightmares of the shamans that are buried there and his mother. His connection to the tribe is, just as his education, never really explained and becomes yet another tangent in the story that contributes to the plot’s unfocused meandering. “Mommy’s Little Monster” has little to do with mommy or the monster and slowly saunters into a tale that feels like a different movie altogether. I half expected a Lynchian twist midway through and was disappointed when it never came.

We never get to see Karen Black in more than flash backs and visions where she consistently undermines his health and self esteem as she constantly calls him sick and frail, but never has more faults attributed to her other than being overbearing and smothering. In the limited exposure we have to Black she is deliciously creepy and it becomes increasingly difficult to keep looking into her eyes.

Then entire cast actually puts in good performances throughout especially given the largely stagnant characters they had to portray. “Mommy’s Little Monster” was well shot and edited with a good cast, where this one fails is its focus. This is a plot that’s confused as to what it’s about; is it about the relationship between mother and son or the man he eventually becomes, is it about his ties with the tribe or his relationship with his gambling addicted uncle, or is it about him wrestling with his demons while cultivating a relationship with his drunken neighbor as she struggles with her demons? Here is a case in which too many ideas were tackled that never came together. There’s something wrong if in guessing the ending, though wrong, it would have been a better ending.