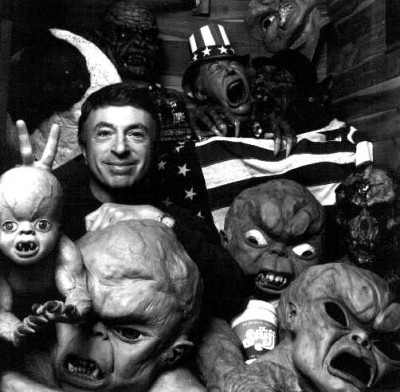 There is plenty of room for argument about director Larry Cohen. His films, when mentioned at all, tend to be dismissed as the lowest kind of hack work. It’s Alive (1973), one of the most successful films of its year at the box-office, appears in a book called The Best, Worst And Most Unusual Horror Films by Darrell W. Moore. It’s in the ‘Worst’ chapter, and is awarded one star out of ten – I’d be tempted to give it nine out of ten. 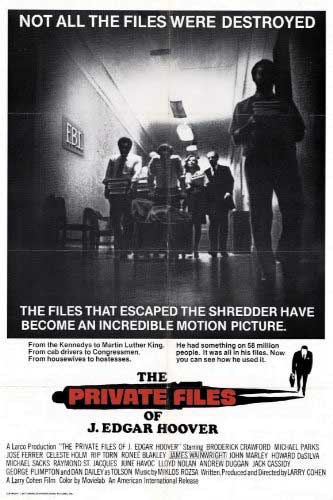 Larry (born 1938) ought not to be confused with the several screenwriters with similar names – one of them Lawrence D. Cohen who wrote Carrie (1976). He was, however, the whiz-kid who created no less than eight television series including the science fiction series The Invaders, wrote at least twenty-nine television episodes and plays, and then left television (still a young man) just as he was becoming quite rich. He is also the Larry Cohen whose docu-drama The Private Files Of J. Edgar Hoover (1976) was not played on American network television because it was thought to be too slanderous. It also reveals the probable identity of Deep Throat, the anonymous tipster who broke open the Watergate Hotel scandal. 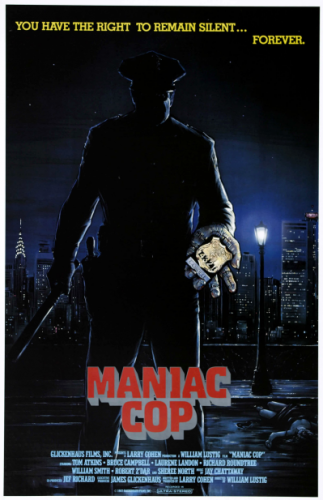 Larry Cohen, who has his own small production company called LarCo, writes, produces and directs all his own films. There is a case for seeing him as one of the most original, subversive and eccentric of all the Hollywood independents. Since his subversion is usually carried out by low budget horror films, he is not seen as any threat to the establishment, but his horror films repay viewing and viewing again, for the extraordinary mileage he gets out of what, in other hands, would be bottom-of-the-barrel exploitation plot ideas. His contributions to horror include It’s Alive (1973), Demon aka God Told Me To (1976), It Lives Again (1978), Q The Winged Serpent (1982), The Stuff (1985), Island Of The Alive (1987), Return To Salem’s Lot (1987), Maniac Cop (1988) and its sequels, Wicked Stepmother (1989) and Body Snatchers (1993). There is no space here to describe them all in detail (you wouldn’t believe me, anyway), but a few high spots should be mentioned. 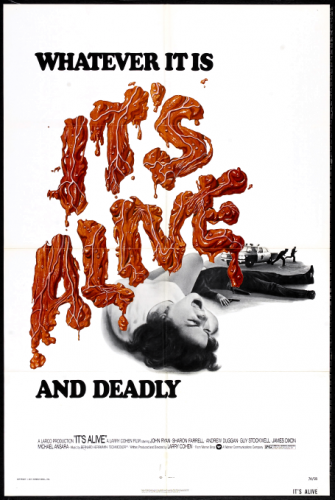 It’s Alive is a film about a toothed, carnivorous, mutant baby who starts life by bloodily demolishing the entire staff of the hospital delivery theatre. Most critics have been so appalled at this schlock premise (fortunately we only see the aftermath) that they have not examined what Larry does with the idea. This is completely different from any other of the many monstrous-child movies of the seventies. The title itself refers back to Frankenstein’s cry of triumph when the monster first comes to life and, as in Frankenstein, the whole film examines the pathos of the abnormal. The baby’s father moves inexorably from terrified rejection to passionate protection of his offspring, which makes its own way home. The film ends with a sequence in the storm drains of Los Angeles – in homage to Them! (1954) which is sufficiently brilliant enough for it to be repeated (probably coincidentally) in E.T. The Extra-Terrestrial (1982), where again the abnormal creature is hunted by the full force of a repressive society and blinded by searchlights – easy enough to do when the audience knows the creature is good (E.T.) but in a tour-de-force of sympathy-arousal in Larry’s case. It’s Alive is also consistently witty, as in the scene where heavily-armed policemen surround a perfectly ordinary baby, guns at the ready, on a suburban front lawn. The baby looks astonished. It Lives Again (1978) extends the imagery in a successful sequel, probing even further the rifts in family life and society at large that a mutant offspring may not only reveal but come to symbolise.

Demon (aka God Told Me To) is a thriller about a mad sniper who is found to have been under the mental control of a messianic, androgynous creature, a child of an alien father and a human mother. In a genuinely astonishing finale, the creature has an unexpected relationship with the police detective who has been hunting it. It’s almost impossible to describe this film. Only Larry could (A) invent a male Christ-like figure with a vagina, and (B) produce a screenplay in which this bizarre image is completely central. Also, any other director would have put the emphasis on the monster, but Larry puts it on the policeman, in an extraordinary study of Catholicism, guilt and the perversion of the instinct to have children. Demon is not the sort of film to appeal to conventional horror-film audiences. For one thing, Larry demands a good deal of intelligence from his viewers: The religious allegory is worked out not only in imagery (pentecostal flames flickering around the new Messiah’s head), but in long passages of dialogue, and in knowing reference (the Messiah has twelve disciples – businessmen – one of whom betrays him to the police). Neither Christian nor Jew is likely to be pleased at the direction of all this symbolism – a harsh unfeeling God. In every Larry Cohen film, the viewer is first asked to swallow a grotesquely fantastic central image, and then finds astonishment that the central drama of the film lies with the all-too-human characters. Larry continually turns our expectations upside-down. 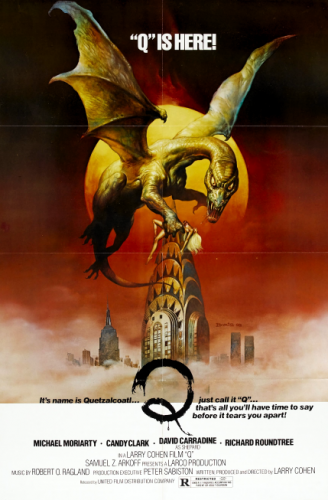 The very title Q The Winged Serpent (based on his own script simply titled Q) points to the ambiguity of the film. Q is an incarnation of Quetzalcoatl, the Aztec god, who appears as a huge flying reptile terrorising New York and appropriately making its nest in the Aztec-like pyramid atop Manhattan’s Chrysler Building. Ritual murders featuring the complete removal of skin from bodies (“Last night I saw a woman flayed, and you would hardly believe how much it altered her person for the worse” as Jonathan Swift once wrote) are connected with the monster’s appearance. But Q can also be identified as a small-time thief Jimmy Quinn (played with extraordinary conviction by Michael Moriarty as a timorous, narcissistic opportunist) who, in his own way, makes sacrifices to the winged god whose lair he has stumbled upon. The almost-likable human monster Quinn coalesces (metaphorically) with the literal monster in one of the wittiest films of 1982, which once again quietly subverts conservative views about how society works, and film-goers views about how B-grade movies work, in very much the same breath. 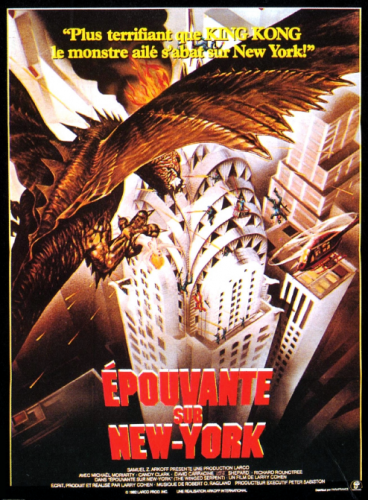 Larry always gets tremendously good performances from his actors. But more important, he is a genuine auteur who, even though he chooses to work in the most derelict slums of genre cinema, has shown the big boys just how ambitious fantastic movies can be. May Larry’s brand of schlock continue for years! Please join me next time when I have the opportunity to present you with more unthinkable realities and unbelievable factoids of the darkest days of cinema, exposing the most daring shriek-and-shudder shock sensations to ever be found in the steaming cesspit known as…Horror News! Toodles! 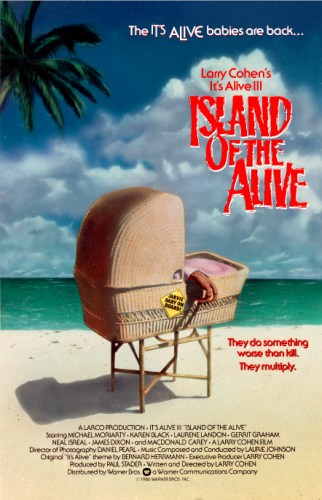