Home | New one sheet for [REC] 3 is all dressed up

New one sheet for [REC] 3 is all dressed up 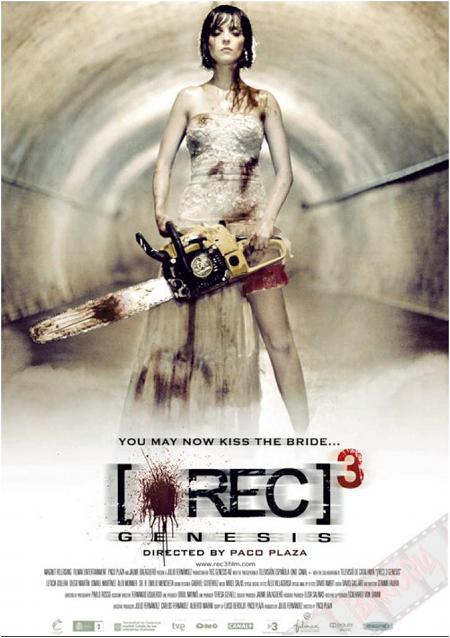 The “{REC}” franchise has proven itself to be one of the surprise hits of the last few years. The Americanized version (which went
under the “Quarantine” banner) were far less popular but the overseas, original versions have been big money makers.

A new one is heading our way soon. “{REC} 3 Genesis” will be coming at us from Magnet Releasing so you know what that means! VOD release followed by an incredibly limited theatrical run followed by a home video release a few months from now.

Story wise, here is what we’re looking at:

Koldo and Clara are about to celebrate the most important day of their lives: their wedding. Everything appears to be running smoothly and the bride and groom and their families are enjoying a wonderful day; that is until some of the guests start showing signs of a strange illness. Before they know what’s happening, the bride and groom find themselves in the middle of a hellish ordeal, as an uncontrollable torrent of violence is unleashed on the wedding. Amidst the chaos, Koldo and Clara become separated and begin a desperate search for one another. What started off as an idyllic day quickly descends into a nightmare of the worst kind…Advertisement

Date wise we’re looking at a August 3rd. As long as you are subscribed to a major cable or dish service finding it should not be a problem. Theatrical release hits Sept. 7th.

I would look for the home video bow sometime around Halloween time.