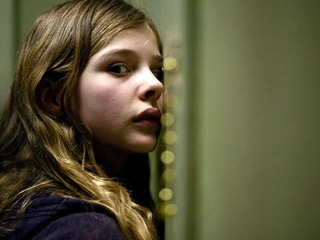 It’s been reported by Fangoria and elsewhere that Chloë Grace Moretz is to take on the role of the telekinetic title character in a new screen version of Stephen King’s breakthrough novel, “Carrie”. So the poorly received sequel and the even more poorly received TV version didn’t tell them anything? And while Chloë is cool, she’s nothing like the Carrie in King’s novel, unless she puts on a hell of a lot of weight and gets a perm.

The original movie version wasn’t completely faithful either, but it is a legitimate genre classic, and for all the right reasons. This one, coming from MGM and Screen Gems, already has the ring of a quickie Platinum Dunes style remake about it, and that’s just from the fact that it’s getting made at all.

Chloë is a great young actress, but taking the lead in a project which will only ever be compared (and no doubt rather harshly) with the original movie is possibly a bad career move. Granted, with special effects technology now able to adequately pull off the actual ending to Stephen King’s original story, the new film will look amazing, but will it be able to have the impact of that incredible film starring Sissy Spacek and John Travolta? The original film may be dated now, put its power lives on, and the budgetfor this remake could be spent on a restored version of that flick, rather than a watered-down remake. Can we have something new please?