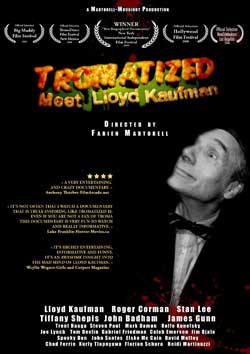 Tromatized is a portrait of legendary and eccentric director/writer/producer Lloyd Kaufman and his film company Troma, Inc., an independent New York-based production house that has specialized in Z-films for over 35 years. It presents the creation of the Toxic Avenger, Kaufman’s unique cinematic vision and his approach at the film world.

If you’re reading this website, you’re probably familiar with the name Lloyd Kaufman. As his common screen credit attributes, he is the president of Troma and creator of The Toxic Avenger. However, he is much more than that. He represents a rare breed of independent filmmaker that sticks to his roots, no matter the cost. He has been in the industry some 40 years and suffered through many hardships, yet he continues to go strong.

So, the subtitle of the new documentary of which Kaufman is the subject, Tromatized: Meet Lloyd Kaufman, is a bit unnecessary. He is a legend of indie filmm, and those who aren’t already familiar with his work will not likely see the doc. For fans, however, it’s a nice watch – even if it doesn’t offer much in the way of new information. 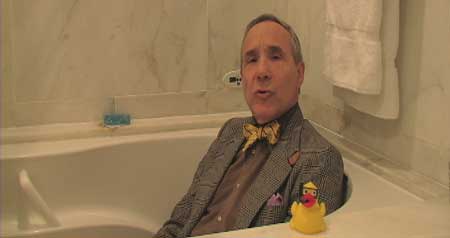 Kaufman has appeared in dozens of documentaries, but this one is tailored specifically to him and his accomplishments with Troma. It retreads a lot of material from Kaufman’s own documentary, Make Your Own Damn Movie!, but without many of the big name guests. While that doc is catered toward aspiring filmmakers, Tromatized is for any fan of Kaufman’s work. It focuses more on the man and his philosophies than the movies themselves, but there are plenty of tidbits from them as well.

From his eccentric, sophomoric sense of humor – which extends far beyond his films and into his personal life, as the film shows – one may not realize how intelligent Kaufman truly is. He is a Yale University graduate, is fluent in Chinese and French and serves at the chairman of the Independent Film and Television Alliance.

Kaufman got his start working on such films as Rocky, Saturday Night Fever and The Final Countdown. It was during this time that he picked up numerous filmmaking techniques and, more importantly, learned to fight for what he believes in. Using this knowledge, Kaufman and business partner Michael Herz (who is noticeably absent from the film due to his publicity shyness) founded Troma Entertainment in 1974, make it the world’s longest running independent film studio. 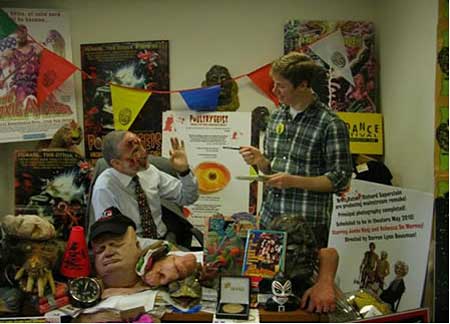 Kaufman has gone on to direct, write, produce and/or act in hundreds of movies. His own works include such cult classics as Poultrygeist: Night of the Chicken Dead, Class of Nuke ‘Em High, Sgt. Kabukiman N.Y.P.D., Tromeo and Juliet, Terror Firmer and, of course, The Toxic Avenger series. (Really, he is responsible for all of the best Troma movies.)

Kaufman is nothing if not passionate. That is abundantly clear by his interviews in the film. He may pepper them with crass jokes while in a bathtub, in bed or sitting on the toilet, but they are poignant nonetheless. He is also inspiring. Tromatized made me want to go out and make my own damn movie the second that it credits rolled.

The interview quality varies in terms of audio/video, but the contest is good. The subjects range from big names such as Roger Corman and Stan Lee to some of the many people who got their start thanks to Uncle Lloyd, such as James Gunn, Joe Lunch, Tiffany Shepis and Trent Haaga. (Unfortunately, Trey Parker, Matt Stone and Eli Roth appear only in archival footage.) Regardless of their stature in the industry, all of subjects have a deep appreciation for Kaufman’s spirit.

Kaufman is equated to the legendary Roger Corman by multiple interviewees – and it’s an apt comparison. Both have beat the odds and made a name for themselves with fun, truly independent films made for dirt cheap, launching many successful careers in the process.

The biggest pitfall of the film is its lack of narrative; it jumps from point to point and guest to guest without much reason. Further ruining the flow is the abundance of clips from Troma movies, despite often being unrelated to the discussion at hand. It would have been nice if writer/director Fabien Martorell had provided a chronological biography with more in-depth interviews.

It may seem more like an extended DVD feature than a standalone documentary, but there is still plenty to enjoy about Tromatized: Meet Lloyd Kaufman. If you’re a fan of independent filmmaking – Troma or otherwise – it’s worth seeking out.