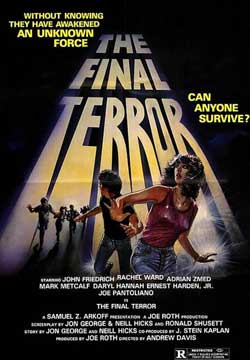 A group of people on a camping trip gets picked off one-by-one by a mysterious killer who is lurking in the woods.

While The Final Terror may not be the most original horror film in the world I still enjoyed it and found it to be quite entertaining. We get all of the usual staples that every good slasher flick must have including people being stalked by a crazed killer in the middle of nowhere, a scene where a creepy story (that ends up being true) is told around a campfire, and your run-of-the-mill characters that are either horny as hell or are obsessed with being stoned that are pretty much just fodder for the psycho killer. This movie has a lot going for it and while I would be hesitant to proclaim it as the best slasher flick from the 80’s I have no problem saying that it is a pretty damn good movie. 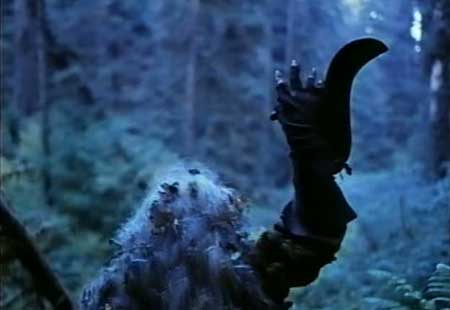 While it shares many elements with other slasher flicks one of the main things that sets it apart from the crowd is the fact that most of the characters are male. While the biggest majority of the 80’s slashers have a “final girl (thanks to movies such as Halloween, Texas Chainsaw Massacre, Black Christmas, and many others that set the standard for such an element)” who is the only one alive at the end and must find a way to defeat the seemingly unstoppable killer who has taken out all of her friends that isn’t the case with The Final Terror. There are female characters (which include Daryl Hannah and Rachel Ward), but none of them are really what I would call pivotal characters and are pretty much just there to look terrified and to scream.

. I like the fact that the male characters (one of which is Mark Metcalf of Animal House fame, for once not playing a total prick in this outing) are helpless and are scared by what is going on as it is very rare that this happens in most horror films, especially in similar movies that were released around the same time period. I thought that it was refreshing to see these big, tough guys run away in mortal terror when the sh*t hits the fan instead of being the fearless badass types that are certain that they can take the killer in a fight only to be brutally and painfully butchered instead. I think that the guys in this movie are a little smarter than the ones from other slasher films as they have enough common sense to know when to run away (plus one of them even says that the group should stay together at one point as opposed to the usual “let’s split up and make things easier for the killer” routine). 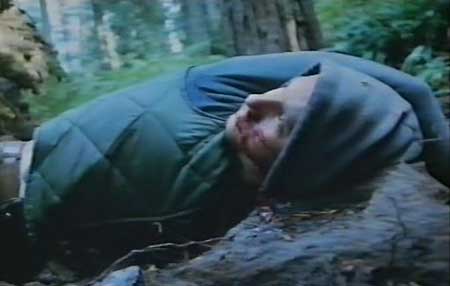 While I liked the movie it wasn’t without a couple of problems that I feel that I have to mention. The movie suffers from a painfully small body count and most of the death scenes are not that creative and are pretty forgettable. Other than the opening scene that involves a poor woman being sliced to pieces by an ingenious trap that utilizes canned food lids none of the death scenes are anything special. We get some tame stabbings, a broken neck, a slashed throat, and someone gets impaled by a tree branch, but none of them really stand out. I didn’t like the fact that half of the cast is alive at the end as there are actually more people who survive the killer’s rampage than those who die. When I watch a horror movie I want a large body count and some gruesome and bloody deaths, but unfortunately The Final Terror doesn’t quite deliver on either one of these things. 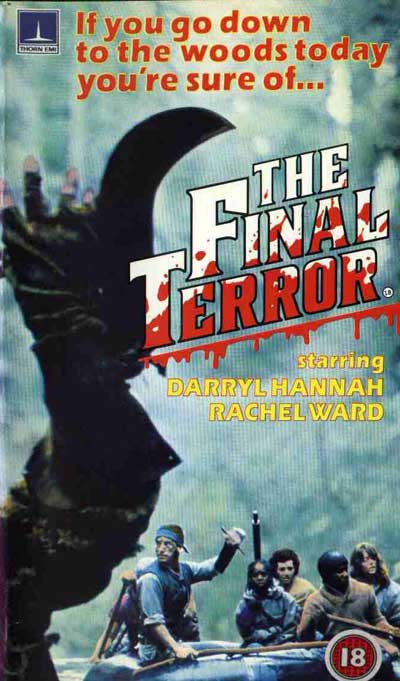 Another problem that I had with it was that the screenwriter had a perfect opportunity to do a cool twist at one point but completely misses doing so. One character is the victim of a prank and pretty much disappears overnight as a result, making the other characters assume that he is lost, hurt, or dead so they set out to look for him (resulting in the death of one of them and the abduction of another). He pops up again later totally unscathed with no real reason as to why he didn’t come back to the campsite for such a long period of time and I was certain that it was going to be revealed at the end that he was actually the son of the killer that is mentioned in the campfire story. Instead this guy turns out to be just another camper and killer’s son is actually the crazy guy that everyone in the group assumes it to be, which leads to a pretty anticlimactic conclusion. I’m not saying that every movie should have some sort of twist (I actually think that the one at the end of High Tension ruined the rest of the movie for me) but it would have really worked in this instance.

The Final Terror isn’t perfect, but I still liked it a lot. I dug the overall vibe of it and despite the fact that some of the night scenes are so dark it is impossible to tell what is going on I still enjoyed watching it. Other than some of the problems that I mentioned it is an awesome movie and I think that it will appeal to any fans of 80’s slasher flicks. Give it a try; I think that you will like it too. 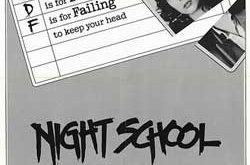 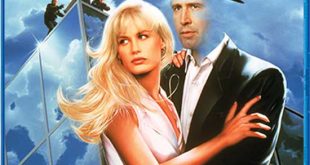 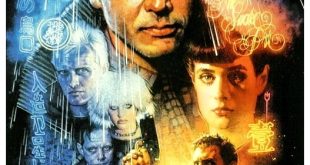