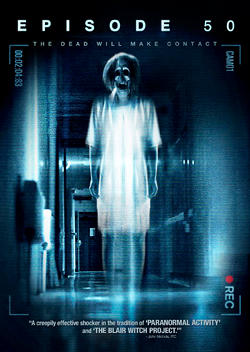 A new “ghost hunters get stalked” flick is heading our way. This one is from Image and it’s called EPISODE 50.

As you can probably guess by the title this one has to do with a team of ghost hunters who get 49 episodes of their show under their belt before things get all to real in EPISODE 50.

Here’s from the press release:

Episode 50 follows two rival television crews of supernatural experts: one team of skeptics looking to discredit myths about the paranormal and another team of strong believers seeking to prove their existence. Teaming up for the first time for a special episode, the crews gets far more than they bargained for when they make contact with a spirit of tremendous power and must band together to stop it before it destroys them all.

Directed by Joe and Tess Smalley and starring a young, dynamic cast including Josh Folan (â€œAll My Children, Death on Demand), Natalie Wetta, Eleanor Wilson and Justin Brutico, Episode 50 will keep you at the edge of your seat until the credits roll!

April 17th is when we can be looking for this one