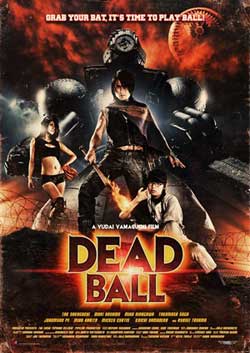 Japan’s most dangerous juvenile delinquent leads a team of hardened criminals onto a deadly baseball battlefield in this wild and crazy splatter comedy!

Another dynamically visual product from the Sushi Typhoon gang, “Dead Ball” adds a zany flair to the art of throwing baseballs combined with prison life. 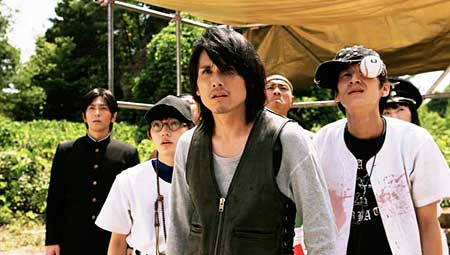 It may come as a surprise but the term “dead ball” is also a real phenomenon called out in sports as such: “the ball is deemed temporarily not playable, and no movement may be made with it or the players from their respective positions of significance”

Jubeh Yakyu (Tak Sakaguchi) deemed a baseball prodigy at a young age, makes a vow never to play baseball again after accidentally murdering his father with one of his powerful throws. He possesses an unusual ability that enables him to create what is called a “fireball pitch” sending the ball like a rocket over to its target. 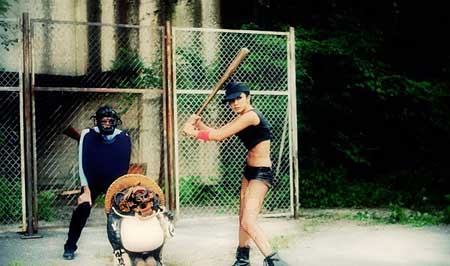 At age 17, we find Jubeh a criminal who is sent off to Pterodactyl Juvenile Reformatory. Jubeh is given a second chance at freedom if he will join the facilities baseball team. He befriends a young inmate they call Four Eyes (Mari Hoshino) and is tricked into playing with the threat of his friends execution if he refuses. The headmistress Ishihara runs a solid camp with her cold Nazi driven ways aided by her sadistic assistant Ilsa. The 2 of them do have a few plans of their own.

As you may have expected, the product is filled head to toe with unusually over-the-top situations combining martial arts, excessive FX, and campy but surreal segments that again will have you asking yourself…what did I just watch. It’s dark humor is a perfect cousin to its predecessors that use gory but cheesy inclusions to simply entertain and amuse. Moments that stands out include Jubeh’s confrontations such as being able to send his fist pummeling thru the phone, a nosebleed that drowns out an entire baseball field, and an amusing musical number that breaks out as the incoming prisoners are welcomed off the transport bus. 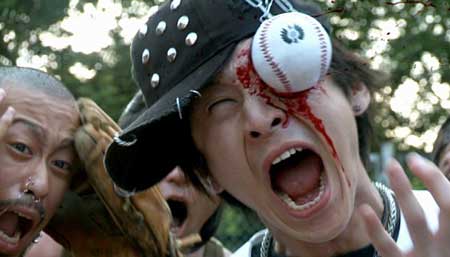 A baseball challenge is inevitable as the “Gauntlets” are pit against the “Black Dahlia High School” ladies in the annual Juvie tournament. The Black Dahlias are not only beautifully sexy, but begin the game with a choreographed routine (of which Jubeh comments “we also need a dance routine”).

Though what the “Gauntlets” didn’t anticipate was that this game is a game of killing rather than a simple sporting event. The show from this point on gets real violent real quick with plenty of cool gadget-driven kills. All in all its filled with this sense of goofy humor such as a baseball that splits into 2 and slices thru its opponents, or a gigantic mouse trap waiting on 3rd base. If that doesn’t get you how about a baseball that contains a tentacle branding monster inside? Fueled by a Nazi administration, the Dahlias seem to be getting the upper hand. Jubeh quickly realizes the reality of the event and does a few lethal tricks of his own. 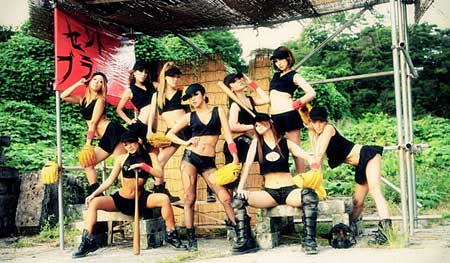 All the while, the script is filled with quick one liners and subtle points of hilariousness (I laughed quite few times during this one) Such as “your ring-wormed infested genitals stink so bad, you’ll die”!”

And if that’s not enough for you all, wait till you get a load of the Nazi super weapon “Glockenheim”…a cybernetic body fused with a human neural system…aka one bad-ass ass-stomping robot annihilator.

Those who are keeping track will delight in Yoshihiro Nishimura adding his inventive FX talents to yet another Sushi product. I did quite enjoy “Yakuza Weapon” and “Helldriver“, though I have to say this latest creation is my favorite of the 3. 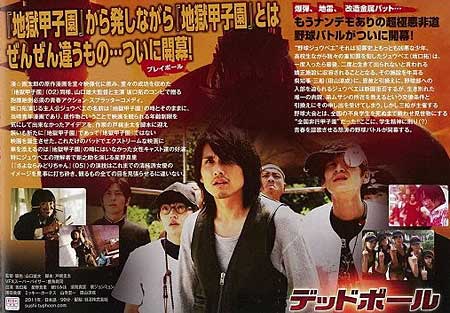 This release is a Yudai Yamaguchi follow up to the 2003 film, “Battlefield Baseball”

“Deadball” is a perfect experiment in dark Asian humor wrapped up in a ball of total mindless chaos. I’d recommend grabbing this one up on Bluray and building a space on your shelf for another Sushi Typhoon products.