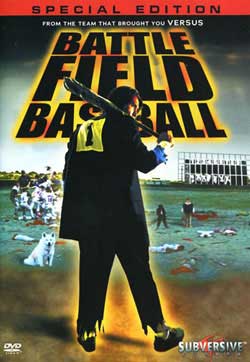 Battlefield Baseball is a tough game–it doesn’t end until all the members on the opposing team are dead. In this game the Gedo High team is composed of blue-faced zombies, and their opponents on the Seido High team know they don’t have a chance at beating them unless they can bring back a star pitcher who has a lethal pitch called the Super Tornado, but who has hung up his cleats and has no desire to return to the game.

This is a alcohol fueled half drunk review of the low budget cult baseball action comedy slash call it a horror movie because fans don’t know what else to call it film, BATTLEFIELD BASEBALL! And I am listening to the most vicious grindcore bands on the planet while BATTLEFIELD BASBEBALL is playing on the tube in the background. Now I will take a drink.

I had seen BATTLEFIELD BASEBALL a time or two before but needed to watch it again to refresh my memory and to see if my opinion on it might have drastically changed after seeing it again. After viewing SARS WAR, MACHINE GIRL, and TOKYO GORE POLICE I am beginning to really love these frenetic, almost incoherent, comedic, dump all logic in the trash bin, cinematic attacks on the senses and while I did like BATTLEFIELD BASEBALL before i suspected I might like it even more. And I did.

Be aware though that in no way is BATTLEFIELD BASEBALL a horror movie. It may have wacky violence and zombies but the violence is more comedic than nasty, mean, and brutal and the zombies are zombies in the loosest sense of the word. I read other reviews that call it a sports/action/horror/comedy but I think they throw the word horror in there just to add another word to their description or because they don’t no what to call it and feel they must label it something. Ah, time for another drink!

Not only is BATTLEFIELD BASEBALL satirizing it’s countries extreme love for the sport of baseball but also pokes fun at violence and gore in movies. By the way when I first saw BATTLEFIELD BASEBALL I had just seen BATTLE ROYAL and was a little confused because they both had battle in their titles and have the similarity of forced combat between teens. But I’m an idiot and there is no connection between the two. But when I first saw it I was hoping for a bloody gorefest that I did not receive. But there is plenty of death and destruction including exploding bodies, impalement by baseball bats, shootings, anal stabbings, along with zombies, cyborgs, flaming baseballs, and superhuman kung – fu battles. But there isn’t much bloodletting and extreme gore. Now I see it more as a live action cartoon and it is based on a manga and I think what came out on the screen is almost exactly what the film makers were going for. And this is a movie that could only come from and be set in Japan. But what do I know. I know I need another drink.

Ya see it all has to do with Seido High and their big chance to win the championship until the principle learns that his schools team will be going up against Gedo High and almost goes into anaphylactic shock! Through the opening scene we learn that when the principle was young and on the Seido team every player but him was ruthlessly slaughtered by the Gedo team. The Gedo High team is made up of these green skinned zombies and they are ruthless killers and it’s legal to do anything in these baseball death matches and the law can’t touch them. Man I need another beer! In Battlefield Baseball there are no rules and it’s kill or be killed.

So the principle is scared witless that his schools team will be slaughtered as well. That is until one of the nerdier team members run into Jubei, a high school tough who saves the nerdy Fours Eyes from a gang of dropouts led by a dude called Bancho. And you know Highschool dropouts are always up to no good. But Jubei royally trounces Bancho and the principle begs Jubei to help his team but Jubei refuses and it’s Four Eyes who gets Jubei to join the team when Jubei sees how much Four Eyes loves the game. And he really loves the game, so much so that he is on the team even though his mother says she will kill him if she finds out he is playing baseball. And there is a reason for this threat too.

But when it’s time for Seido to go up against Gedo Jubei gets thrown in jail and doesn’t break out until the game is over and he finds all the team members dead including Four Eyes. Actually Four Eyes isn’t dead and the body is a booby trap and explodes killing Jubei. But do you think that will stop Jubei? Do ya think I need another drink? Jubei meets up with his father in the afterlife and tells Jubei that he must return to the land of the living to play baseball. So Jubei returns with a new team that includes Four Eyes, Four Eyes’s mom, the head teacher of Seido High, Bancho, the leader of the dropouts in a new body, and one of the dead teammates resurrected in a new cybernetic body, and a ugly cheerleader. All to take on the Gedo High team of weirdo zombies.

One of the things that helps BATTLEFIELD BASEBALL is the actor who plays Jubei. He is either a good martial artist in real life or a good actor who can fake it very well because I think his fight scenes are pretty good and convincing when most of the battles are cartoonish and I was impressed by his moves. But I have been told I am easy to please.

I did my homework on BATTLEFIELD BASEBALL and it was produced by the guy that directed VERSUS, ALIVE, and GODZILLA: Final Wars and MIDNIGHT MEAT TRAIN. And if you still haven’t seen VERSUS you really should check it out.

So yes I really really really dig BATTLEFIELD BASEBALL but it seems that as many people who like it just as many don’t and I can totally see why. It’s pretty outlandish and disregards all movie logic and puts itself out there as being as being kind of dumb and stupid. It has a few musical numbers and there are people that get killed but come back to life like nothing happened. It’s closer to a Bugs Bunny and Tom And Jerry cartoon than it is to a all out gory Japanese flicks. Maybe a bit like KUNG FU HUSTLE now that I think about it.
My only complaint about BATTLEFIELD BASEBALL is the low level of gore and extreme bloodletting but I will watch BATTLEFIELD BASEBALL again but it is not as good as SARS WAR, VERSUS, or BATTLE ROYAL.

If you like EVIL DEAD 2: Dead By Dawn, BRAINDEAD, MACHINE GIRL, NEON MANIACS, Troma movies, Bugs Bunny and Roadrunner cartoons, Japanime, and comic books there is a high probability that you will like BATTLEFIELD BASEBALL and if you like all the movies I mentioned BATTLEFIELD BASEBALL will give you that comfortable feeling that you get from repeatedly watching films of this ilk. Yup, this one’s a keeper for movie freaks like me, you, and that cute girl I saw at the bus stop with a EVIL DEAD shirt.