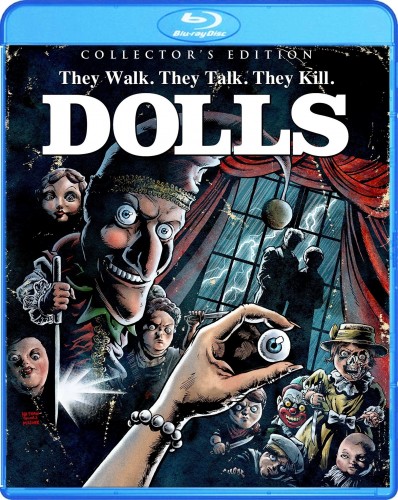 A group of people stop by a mansion during a storm and discover two magical toy makers, and their haunted collection of dolls.

Stop motion is a dying art form, so any time I can see a great old example of it I get pretty excited. I certainly wasn’t expecting to see it in Dolls, which, let’s be honest, from the premise sounds a little silly. Sure large collections of dolls can be a bit creepy, with their tiny hands and flat eyes and fixed-on expressions of happiness or sadness or anger. But except for clown dolls (nothing is more frightening than a clown), they don’t usually evoke fear in most people. 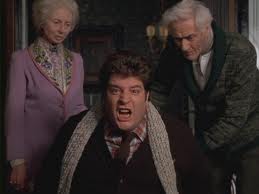 That is exactly what this movie wants – to make you afraid of them. And for the most part, it actually manages to succeed. Because the dolls here don’t just look creepy, they giggle and move and get up and chop you to pieces with tiny – but very sharp – knives. If you don’t want to be nice and play well with others, they will teach you a valuable lesson. One you will remember for the last few moments of your life, at least. 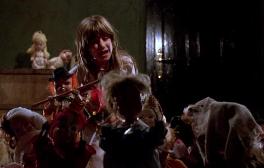 This film was actually a lot better than I expected. I was prepared for all kinds of campy wackiness, like that seen in Puppet Master and Ghoulies. Instead what I got was a gory fairy tale about the importance of remaining a child at heart and loving and respecting the people around you – or else. Dolls is made on film, which I’ve always thought lends well to horror movies. It gives them a heavy, slightly scratchy look that adds to the intensity of their purpose. You just can’t get scared when things are all bubblegum pink and bright. It takes place somewhere in the country wilds of England (I think) which lends a bit of gentility to the haunted house-style setting. And with a kindly old English couple serving as host and hostess of creepy doll Hell, it really is a live action Grimm’s story waiting to happen. 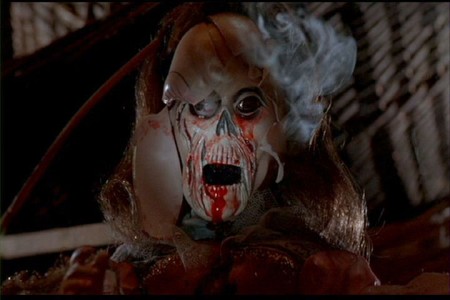 The special effects with the dolls adds quite a bit to the believability and overall creepiness of the story. They are not done with CG, and even composite shots are kept to a bare minimum. The majority of scenes are done with precise and well shot stop motion. The dolls move slowly, jerkily, like you expect real dolls would …. if they suddenly came to life and started attacking people. Many of their action sequences don’t even take place on camera. They move when you aren’t looking, giggle menacingly from the dark corners of a room, and drag victims off into the shadows to do the real dirty work. It is an effective way to make something that could look ridiculous on camera seem, well, not so ridiculous.

It helps Dolls that it was directed by a horror professional, Stuart Gordon, who before this made Re-Animator and From Beyond, and later when on to make The Pit and the Pendulum, Dagon, two episodes of Masters of Horror and an episode of Fear Itself. You have to have a feeling and understanding of horror to make a good scary movie, and it helps to have a director who has worked in the genre and shown that he is capable of getting the point across (if there was a point in Re-Animator of course). Dolls was written by Ed Naha, who might not have a long horror resume to back him up, but did write the feature Troll. Another film with a fairytale feel to it that mixed a bit of scary with a bit of fantasy.

It is, unfortunately, in the dialogue where we see the major flaws in this film. The little girl (Carrie Lorraine), while managing to get all of her lines out in each scene, is obviously spewing forth things repeated to her over and over again so she’ll remember them. And I could actually see her taking direction from someone off camera a time or two. Dakota Fanning she was not. Her stepmother is textbook evil, her father is stereotypically neglectful, and the British punk girls who show up are the definition of Madonna-wannabes spouting too much slang and not enough real punk vitriol.

That isn’t to say the acting was bad, per se. Ian Patrick Williams of Re-Animator and TerrorVision (as the sorry excuse for a father) has the experience to get things done, and classy Guy Rolfe (who would later star in four of the Puppetmaster sequels) manages to be comforting and yet mildly threatening at the same time. They just don’t have the greatest material to work with and so make do with a film that is top-notch in effects but pretty average in dialogue.