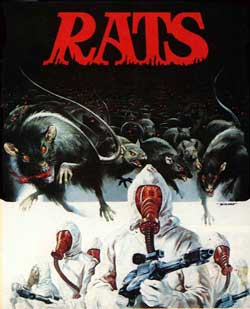 One hundred years after a nuclear war has devastated the planet, society has been reborn into two factions; the underground society and the scavangers above in the wastelands. A group of scavangers on bikes come across a town infested with flesh eating rats, and soon the gore is spilling everywhere.

Initially, I wasn’t expecting all that much from this film, maybe a take on Willard. Then, as I watched the intro and listened to the narrator explaining the premise of two factions, an underground society and an above the ground scavenger clan, I had the impression it might be sort of Mad Maxish. The first scene began and Iguanas ran about while the camera panned to a skeleton in a burned out car. As a few moving steel plated armor covered vehicles and motorcycles came into camera view, I’m seriously starting to think The Road Warrior meets Ben. But, then the actors came into play and my initial suspicions were confirmed. This was certainly not going to be a post-apocalyptic type film filled with rats. These players’ were entirely too clean cut and pretty, especially to have supposedly been living in a world after the end has come and gone. I suppose this should have been expected from an English dubbed Italian “B” film with no-name actors. 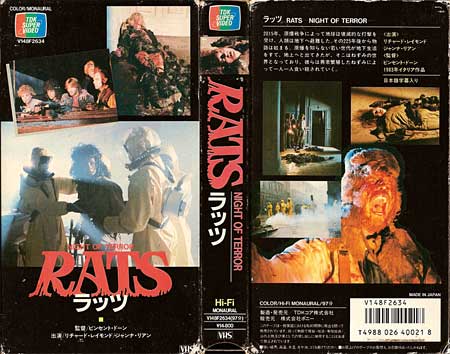 The year is 225 A.B. (After the Bomb), and it is the time of the new primitives, a motley crew of four woman, Lilith, Chocolate, Myrna, Diana, and seven men, Kurt, Duke, Taurus, Video, Deus, Noah and Lucifer.

Starving, (although each appeared rather nourished to me), leader Kurt, picture Peter Fonda in Easy Rider, and his cohort Taurus, who could easily pass for Chuck Norris’ little brother, lead the rag tag gang into an abandoned building at the heart of an unknown and decrepit city on a food exploration hunt. A few rats scamper about when they do and they discuss various rat recipes they have cooked and eaten in the past. Deus attempts to catch one of the red beady eyed gray matted haired little rodents, but is unable to. As luck would have it, they stumble upon boxes full of food, assorted jars and cans filled with vegetables, bags of sugar, and even a sack of flour, which they pour over Chocolate as a joke. The gluttony begins and Diana falls joyfully onto a blanket covered bed. She notices the blanket moving and lowers it to find a partially eaten body covered with rats. 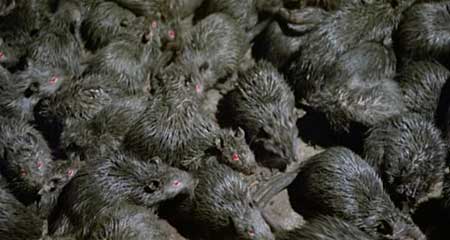 Upon further exploration into the lower rooms, they find a computer (picture a huge 1950’s model) and Video, who is reputed as his name implies, to be witty with computers and computer games, bangs on a few buttons and the thing boots up. Meanwhile, as watched by a large white rat (the obvious leader of the rat clan), Deus searches the basement and finds a hydroponic growing system complete with fruit, vegetable and flowering plants, along with a fresh water system that purifies rain water. 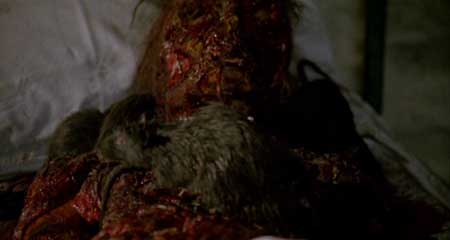 Soon, night falls and the rats come out in droves to begin picking off each member of the group. After menial storylines including: a sexual encounter between Lucifer (who’d a thought) and Lilith, a spat of dissention between Kurt and Duke, and some constant way over-the-top screaming while attempting to act by Myrna (I think), a revelation, in the form of a voice recording, explains that rats, who used to be typical underground nocturnal creatures, had been forced above ground when the underground society took to the subterranean. And, the recording goes on to explain that a clan of rats is close and will kill any intruder that tries to infiltrate the group. The night moves on and one by one, each is attacked, killed and presumably eaten until daylight when only Chocolate and Noah are left.

In a nice ending twist reminiscent of Twilight Zone, Outer Limits or Monsters, the underground society, fully covered in bright yellow protective suits and sporting facial respirators, make their way in the streets around the building, laying down poisonous gas smog which kills the rats. Chocolate and Noah are now on the buildings steps watching as the underground dwellers approach them. Each is ecstatic with hope…until the respirators are removed to reveal rat faces. 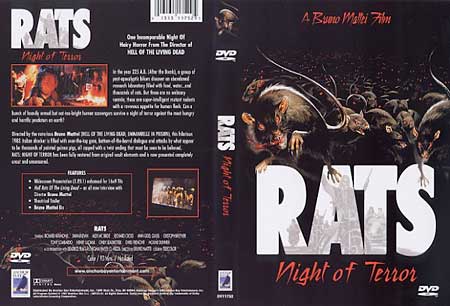 Hilarious is one positive adjective that came to mind while viewing this film, especially when the rats, obviously being poured in clusters over the actor from above, supposedly attacked. The dialogue dubbing will probably generate chuckles too, but is understandable as the editor made every attempt to add words that corresponded closely with mouth movements. The rat attacking gore, while commendable in attempt, is more like a red blotched hurry up and put the red make up on type job, with some scenes better than others and left a lot to be desired. On the other hand, if rats, scurrying about in clusters, make you queasy and creep you out, this is probably a film for you. 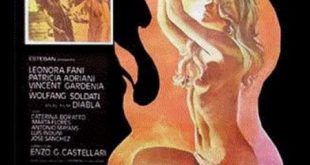