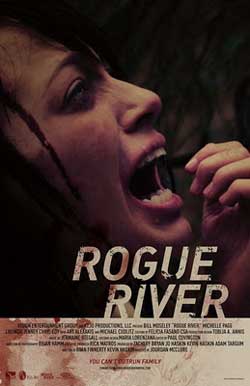 From the opening scene, director Jourdan McClure had completely grasped the audience’s attention with a tattered and blood covered protagonist putting a gun to her head. As the scene fades to black, a single gunshot is heard and the audience feels as if they are in for a gruesome ride.

Mara, Michelle Page (Miss Congeniality 2), is driving to where her father had taken her many times in her youth, to the famed Rogue River in order to scatter his ashes into it. While there, a seemingly nice enough older gentleman named Jon, Bill Moseley (House of 1000 Corpses), kindly informs her that it is unlawful to do so and he walks her back to her car, which has been towed leaving her stranded. He offers to take her into town, but must stop by to check on his terminally ill wife Lea, Lucinda Jenney (Rainman and Thelma & Louise), first. This is where the film’s oddness begins to creep in, enhanced by the more than adequate soundtrack. 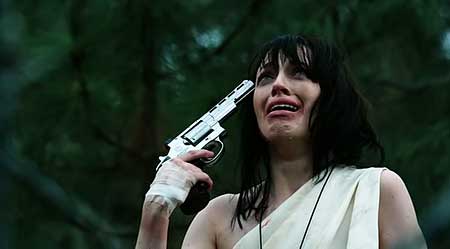 Jon and his wife live deep off the beaten path, far from town and it’s obvious that Mara is somewhat concerned. At the home, Jon invites Mara in to meet Lea and she hesitantly accepts. Lea learns of Mara plans to stay at a motel in town and invites her to spend the night with them instead, which Mara accepts.

After dinner, in one of the goriest scenes of the movie, Mara mishandles a plate while handing it to Lea and it shatters on the floor. Mara makes an attempt to pick up the large sharp pieces and Lea firmly grabs hold of Mara’s hand, inadvertently causing (and maybe even forcing) her to slice her palm wide open. The following scene is even more disturbing with Jon holding Mara down while Lea stitches up the gapping and glistening wound. It has now become clear to the audience that this couple is considerably more than just whacked. 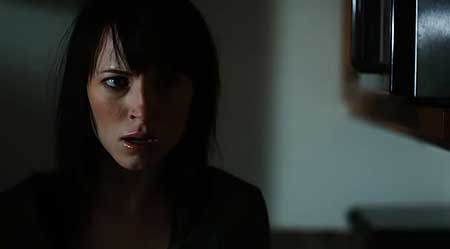 After awakening to Jon, standing at the foot of her bed clad only in underwear, Mara is more than just a little freaked, especially when Jon informs her that he has been talking to her father’s ashes and just watching her sleep. She decides to make a break for it, gathers her things and begins walking down the desolate highway. Jon comes out of the shadows, sneaks up behind her and strikes the back of her head with the butt of his rifle, rendering her unconscious. When she awakes, back in the home’s bed, she finds her ankles locked tightly by a leather strap and realizes that she is now being held against her will.

Throughout the rest of the film she is chronically tormented (not even close to the Hostel series) and forced into a demented sexual act with an unconscious fellow captive that is being kept in a basement trunk. Eventually she escapes; we know that from the beginning of the film, and the predictable woman running barefoot through the woods ensues before she goes on to inflict retribution in a half-hearted take on the movie I Spit on Your Grave.

While the film generates and maintains suspense all the way up until the final credits, it never seems to let the ride hit its peak and a viewer won’t realize this until the end.

The casting was certainly there, however, the limited dialogue coupled with the actors not fully conveying the character they portrayed makes this film mediocre at best. For example, Mara, finding herself in a terrifying situation that would typically cause anyone to basically go off the deep end, seemed to only be able to muster a few whimper filled tears which weren’t all that believable. Bill Moseley, and maybe this opinion is due to his similar cast type of roles, was fine as a yelling and sometimes hapless, bordering stupid, would be kidnapper. But, he could have easily enhanced the role, making the character much more chilling. Lucinda Jenney, in my opinion, stole the show with her quirky irrational actions and chemotherapy thinned hair giving her the impression that she was some sort of wicked old witch. 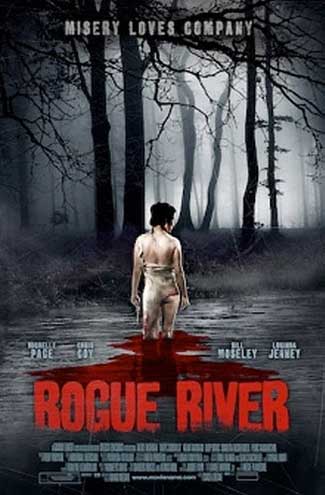 As far as cinematography is concerned, specifically, the camera shots from the floor height looking back down a hallway were impressive and fully implied fear. But, there were too few to maintain the terror and therefore, the fright was not fully harbored.

The set choice was well considered and deserves mentioning, but Rogue River certainly had the potential to be a much better film. While it may appeal to hardcore fans of the subgenre, most horror seeking fans will probably find it hard to sit through and might end up looking for the stop button.